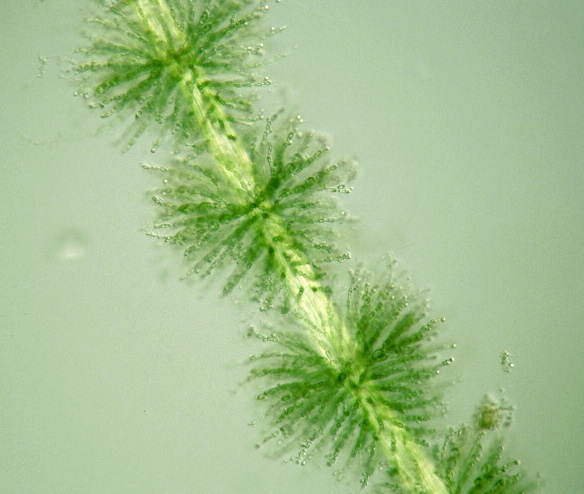 Batrachospermum is fresh water alga.
It is found in clear, cool and running streams.
Deep water plants are dark violet or reddish in colour.
But the shallow water species are olive green.

The intensity of light changes the colour of pigments.
The thallus is attached to the substratum.

Thallus of adult plant is soft, thick, filamentous.
It is freely branched and gelatinous.
The central axis is made up 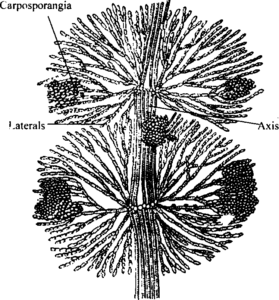 of single row of large cells.
Whorls of branches of limited growth are developed on this axis.
These branches are filamentous and dichotomously arranged.
The main axis is corticated. It consists of a row of elongated cylindrical cells.
It is differentiated into nodes and intemodes.
There are two types of branches arise from the nodes:

These arise in whorls from the nodes. These grow for sometime, and then these end in long hairs. Their cells arranged like beads. All of the branches of a whorl are equal in length. Therefore, they form globose structure called glomerule.

The cells are uninucleate. Their cell, are covered by two layered cell walls.
Outer layer is composed of pectic compounds and inner layer is composed of cellulose.
Pit connections are present between cells.
Cell has many irregular chromatophores. Its pigments are phroerythrin, phycocyanin, and other photosynthetic pigments like chlorophyll a, chlorophyll b, Carotene and Xanthophyll.
Each chrcmatophore has single pyrenoid. The central cells of the axis are connected by cytoplasmic connection. Reserved food material is floridean starch.

I. Formation of branches of limited growth:

Growth in main filament occurs by apical single cell.
Transverse division occurs in the cell.
It cut off cells towards the posterior side.
Each of these cells cuts off of four small cells.
These cells become initials for the side branches.
These initials divide manv times.
Cluster of small branches arises form these groups of lateral cells. It gives the plant beaded pattern.
Each cluster of side branches called glomerule. These branches produce whorls.

The cells of the central axis elongates very much.
Therefore, lateral cells separate from each other.
Thus they form node like structure on the axis.

One or more cells on each node may acts as apical cell. This cell produces lateral branches of unlimited growth like main axis.

Non-motile asexual spores called monospores are produced in Batrachospermum. They are produced only by juvenile stage or chantransia stage.

Sexual reproduction is oogamous. The plant may be homothallic and heterothallic.

The male sex organs are antheridia or spermatangia.
They are small unicellular structure.
Mature spermataguium is thick walled, colourless and rounded.
Spermatangia are produced singly, in pairs in groups of fours.
The protoplast of antheridium changes into single non-motile spermatium.
The antheridial wall ruptures and release spermatium.

The female reproductive organ is carpogonia.
Carpogonia are unicellular.
It consists of an elongated cell present at the base.
The upper larger portion is called trichogyne.
The lower globular portion is called mirophore.
The branch bearing the carpogonium is called ascocarp.
Ascocarp consists of four cells.
The terminal cell form carpogonium.
Egg nucleus is present in mirophore.
Egg nucleus is surrounded by some cytoplasm and it changes into egg.
Trichogyne is separated from the mirophore by a constriction.
Trichogyne is used for receiving sperm.

The spermatium falls on the surface of trichogyne.
The wall of trichogyne dissolves and spermatium nucleus enters into carpogonium.
It fuses with the female nucleus to form zygote.
Germination The zygote nucleus divides into four nuclei.
First division is reduction division.

The terminal cell of gonimoblast filament produces non-motile carpospore. The carpospore is formed in the form of naked mass of protoplast.

Carpospore separates from the filaments and secretes cell wall.
It settles on suitable environment.
Then it becomes a pod of parenchymatous tissues.
A small outgrowth is formed from one side of carpospore.
The outgrowth is cut off by the formation of septum.
It divides transversely for many times to form prostrate filaments.
This sage of thallus resemble to another alga called chantransia.
Therefore, this stage of Batrachospermum is called Chantransia stage.
It is juvenile stage. This stage reproduces by formation of monospores.

The terminal cells of filaments form monospore.
Monospores are non-motile and uninucleate.
They are produced in monosporangia.
Some cells of the Chantransia stage become swollen.
They become spherical and oblong to form monosporangia.
The content of each monosporangium develop into single uninucleate spore called monospore.
These spores librates and again develop chantransia stage.
The terminal cells of the lower branches of chantransia functions as apical cell.
They give rise to adult plant.
It is generally believed that chantransia filament forms the prostate system.

Batrachospermum plant is free living haploid gametophyte.
It cevelops spermatangia and carpogonia which produce male and female gametes.
These gametes unite to form diploid zygote.
The zygote nucleus divides meiotically and gonimoblast nuclei are formed. T
he terminal cells of gonimoblast act as carposporangia.
These develop carpospores this plant is called carposporopbyte.