There are several steps in the production and release of conidia, namely
(1) conidiogenesis, i.e. conidial initiation;
(2) maturation;
(3) delimitation;
(4) secession, i.e. separation from the conidiogenous cell;
(5) proliferation of the conidiogenous cell or conidiophore to form further conidia.
Conidiogenesis occurs in two ways which appear to be distinct at first glance: blastic and thallic

The conidium develops by the blowing-out of the wall of a cell, usually from the tip of a hypha, sometimes laterally as in Aureobasidium.
Two kinds of blastic development have been distinguished. 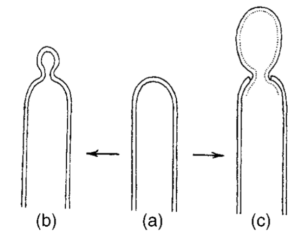 All the wall layers of the conidiogenous cell contribute to the wall of the newly formed conidium.

The wall of the conidiogenous cell is rigid and breaks open. The initial of the conidium is pushed through the opening and is surrounded by a newly formed wall.
Two types of enteroblastic development have been distinguished, phialidic and annellidic.

In phialidic development a basipetal succession of conidia (phialospores, phialoconidia) develops from a specialized conidiogenous cell, the phialide (Gr. diminutive of phialis = flask), usually shaped like a bottle with a narrow neck. Phialides are formed singly or in clusters at the tip of a conidiophore or, more rarely, laterally. There may be one or several nuclei in a phialide.

The difference between the two modes of development is that new wall material which is secreted within the annellide protrudes beyond its neck and the septum which cuts off the newly formed conidium also forms beyond the neck.

As each new conidium develops in basipetal fashion, a small ring of wall material (annellation) is left at the neck of the annellide, which thus grows in length as successive conidia develop. This accumulation of short collars of wall material is the annellated zone.

Secession of conidia, irrespective of their mode of development, is in most cases by dissolution of the septum or septa which separate them from the conidiogenous cell or from adjacent spores. This process is termed schizolytic secession (Gr. schizo= to split, divide; lyticos = able to loosen).

In some other cases secession is brought about by the collapse of a special separating cell beneath the terminal conidium. This is termed rhexolytic secession (Gr. rhexis = a rupture, breaking). 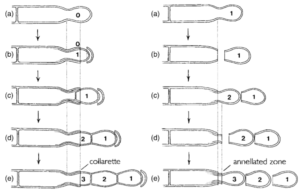 Thallic conidiogenesis (Gr. thallos = a branch) occurs by conversion of a pre-existing hyphal element in which terminal or intercalary cells of a hypha become cut off by septa . Two kinds of thallic development have been distinguished: holothallic (Gr. holos= whole, entire) and thallic-arthric (Gr. arthron =a joint).

In holothallic development a hyphal element, e.g. a terminal segment of a hypha, is converted as a whole into a single conidium. Secession of such conidia may be schizolytic or rhexolytic. Microsporum spp. (anamorphic Arthroderma), which are skin pathogens (dermatophytes) of mammals, provide examples of this holothallic development.

During thallic-arthric conidiogenesis, septa develop in a hypha and divide it up into segments which separate into individual cells by dissolution of the septa. Geotrichum candidum (anamorphic Galactomyces), a common soil fungus and frequent contaminant of milk and milk products, develops conidia in this way. 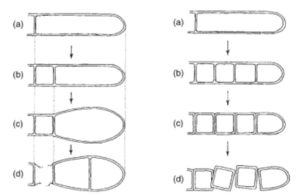