The vegetative hypha:
Although some members of the Oomycota grow as sac-like or branched thalli, most of them produce hyphae forming a mycelium. The hyphae of Oomycota are coenocytic, i.e. they generally do not form cross-walls (septa) except in old compartments or at the base of reproductive structures. The cytoplasm is generally coarsely granular and contains vacuoles, Golgi stacks, mitochondria and diploid nuclei. The apex is devoid of organelles other than numerous secretory vesicles.
The cell wall also not made up of chitin but cellulose. 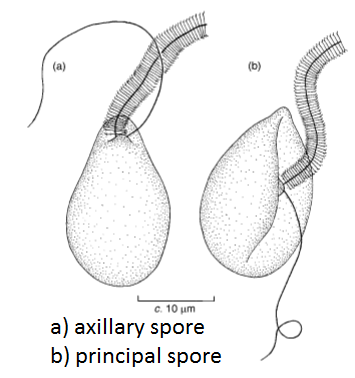 The Oomycota are characterized by motile asexual spores (zoospores) which are produced in spherical or elongated zoosporangia. They are heterokont, possessing one straminipilous and one whiplash-type flagellum.
Two types of zoospore may be produced and, if so, the auxiliary zoospore is the first formed. It is grape seed shaped, with both flagella inserted apically and it encysts soon after its formation. The cyst germinates to give rise to the principal zoospore, which is by far the more common type and also the more vigorous swimmer.  It is kidney-shaped, with the flagella inserted laterally in a kinetosome boss which in turn is located within the lateral groove.

Sexual reproduction:
The life cycle of the Oomycota is of the haplomitotic B type, i.e. mitosis occurs only between karyogamy and meiosis. All vegetative structures of Oomycota are therefore diploid. This is in contrast to the Eumycota in which vegetative nuclei are usually haploid, the first division after karyogamy being
meiotic. Sexual reproduction in Oomycota is oogamous, i.e. male and female gametangia are of different size and shape. Meiosis occurs in the male antheridia and in the female oogonia, and is followed by plasmogamy (fusion between the protoplasts) and karyogamy (fusion of haploid nuclei). Numerous meioses can occur synchronously, so that true sexual reproduction can actually happen within the same protoplast. Heterothallic species of Oomycota display relative sexuality, i.e. a strain can produce antheridia in combination with a second strain but oogonia when paired against a third. Steroid hormones play an important role in sexual reproduction . The mature oospore contains three major pools of storage compounds. The oospore wall often appears stratified, and this is due in part to a polysaccharide reserve compartment, the endospore, which is located between the plasma membrane and the outer spore wall (epispore). Upon germination, the endospore is thought to coat the emerging germ tube with wall material, and some material may also be taken up by endocytosis. A large storage vacuole inside the oospore protoplast is called the ooplast. 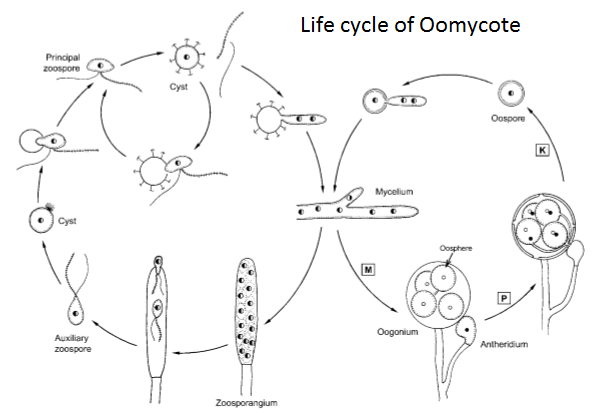