Another strategy for getting a gene of interest into plant tissue is to blast the DNA through the plant cell walls with a particle gun. Unlike Ti plasmid transfer by Agrobacterium , this technique works with all types of plants. The basic idea is that DNA is carried on microscopic metal particles. These are fired by a gun into plant tissue and penetrate the plant cell walls. This technique is rather nonspecific, yet it has been very successful in the plant world. 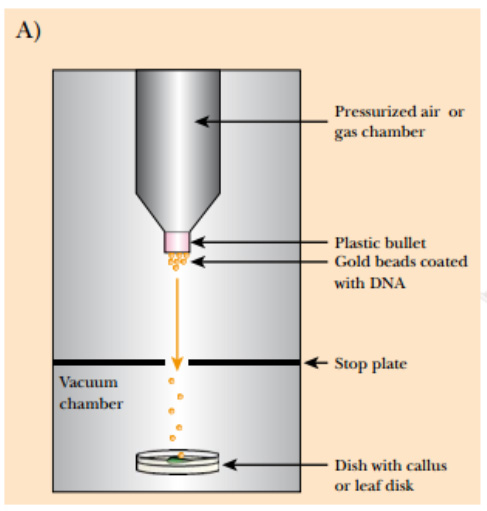 Figure A: a gene gun that operates via pressurized air is shown

First, either a leaf disk (just a round piece of leaf tissue) or a piece of callus is isolated from the plant, placed on a dish, and put in a vacuum chamber.

The DNA to be inserted (carrying the gene of interest, with any promoter and enhancer elements, plus selectable markers) is coated on microscopic gold or tungsten beads.

Gold beads are preferable because tungsten can be toxic to some plants.

The beads are placed at the end of a plastic bullet.

One variant of the method uses a blast of air or helium to project the bullet toward the sample. In the first gene guns, actual firearm blanks were used to accelerate the bullet. 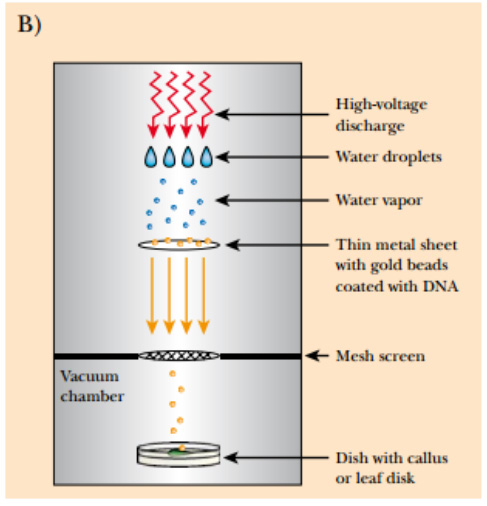 Figure B:  a gene gun that operates via a high-voltage discharge. In both cases the stop plate halts the projectile and the microscopic metal particles carrying the DNA continue on to penetrate the plant tissue.

An alternative method is to accelerate the beads by a strong electrical discharge.

The high voltage vaporizes a water droplet, and the resulting shock wave propels a thin metal sheet covered with the particles at a mesh screen.

The screen blocks the metal sheet but allows the DNA-coated particles to accelerate through into the plant tissue.

One advantage to this method is that the strength of the electrical discharge can be controlled; therefore, the amount of penetration into the tissue can be changed at will.

When the beads penetrate the tissue, some will actually enter the cytoplasm or nucleus of the leaf or callus cells. The DNA dissolves off the beads inside the cells and the DNA is free to recombine with the chromosomal DNA of the plant.

The leaf or callus tissue is then transferred to selection media where the cells that integrated the DNA carrying the selectable marker are able to grow, but other cells die. The transformed plants are regenerated using tissue culture techniques, and finally screened for the gene of interest.

Particle guns have also been used on animal tissues. In addition, scientists have modified the technology in order to transform DNA into the mitochondria of yeast, as well as the chloroplasts of Chlamydomonas , a small green alga. 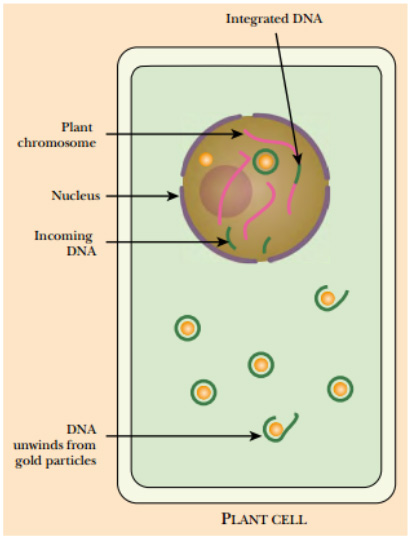 Figure: DNA Carried on Microscopic Gold Particles Can Integrate into Plant
Chromosomes After penetrating the cell, the DNA unwinds from around the gold carrier particle. Some of the DNA enters the nucleus
and is successful in integrating into the plant chromosomes.