The name Phytophthora (Gr.: ‘plant destroyer’) is apt, most species being highly destructive plant pathogens. The best known is P. infestans, cause of late blight of potatoes. This fungus is confined to solanaceous hosts (especially tomato and potato), but others have a much wider host range. For example, P. cactorum has been recorded from over 200 species belonging to 60 families of flowering plants, causing a variety of diseases such as damping off or rots of roots, fruits and shoots. Phytophthora cinnamomi has the widest host range of all species, being capable of infecting over 1000 plants and causing serious diseases especially on woody hosts, including conifers and Eucalyptus. Several other Phytophthora spp. and related Pythium spp. can also cause diebacks and sudden-death symptoms of trees, with roots severely rotted by the time above-ground symptoms become apparent.

Most species form an aseptate mycelium producing branches at right angles, often constricted at their point of origin. Septa may be present in older cultures. Within the host, the mycelium is intercellular, but haustoria may be formed. These are specialized hyphal branches which penetrate the wall of the host cell and invaginate its plasmalemma, thereby establishing a point of contact between pathogen and host membranes. Haustoria are typical of biotrophic pathogens such as the Peronosporales ( but may also be formed during initial biotrophic phases of infections which subsequently turn necrotrophic. In P. infestans within potato tubers, the haustoria appear as finger-like protuberances. Electron micrographs of infected potato leaves show that the haustoria are not surrounded by host cell wall material, but by an encapsulation called the extrahaustorial matrix which is probably of fungal origin.

The sporangia of Phytophthora spp. are usually pear-shaped or lemon-shaped and arise on simple or branched sporangiophores which are more clearly differentiated than those of Pythium. On the host plant, the sporangiophores may emerge through the stomata, as in P. infestans. The first sporangium is terminal, but the hypha bearing it may push it to one side and form further sporangia by sympodial growth.
Sporangia may germinate either directly by means of a germ tube, or by releasing zoospores. The latter seems to be the original route because undifferentiated sporangia contain pre-formed flagella within their cytoplasm, and these are degraded under unfavourable conditions leading to direct germination.
The mode of germination is dependent on environmental parameters. For example, in P. infestans, uninucleate zoospores are produced below 15ºC whilst above 20ºC multinucleate germ tubes arise. Further, with increasing age sporangia lose their capacity to produce zoospores and tend to germinate directly.
Thick-walled asexual spherical chlamydospores have also been described for many Phytophthora spp. and can survive in soil for several years. 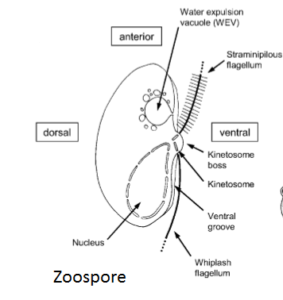 Zoospores of Phytophthora swim for several hours, travelling distances of a few centimetres in water or wet soil, although they can be spread much further by passive movement within water currents. They are attracted chemotactically to plant roots by non-specific root exudates such as amino acids, host-specific substances, or the electrical field generated by plant roots. Zoospore cysts germinate quite rapidly after their formation, usually by means of a germ tube which infects the plant roots directly. In the case of hard surfaces such as leaves, the germ tube may form an appressorium which mediates infection.

Oospore formation is dependent on sterols and mating hormones and may be homo- or heterothallic. Phylogenetic studies have indicated that the former is ancestral, heterothallism having arisen repeatedly within the genus Phytophthora.

Two distinct types of antheridial arrangement are found. In P. fragariae, P. megasperma and a number of other species, antheridia are attached laterally to the oogonium and are described as paragynous meaning ‘beside the female’ . In other Phytophthora species such as P. infestans, P. cinnamomi and P. erythroseptica, the oogonium, during its development, penetrates and grows through the antheridium. The oogonial hypha emerges above the antheridium and inflates to form a spherical oogonium, with the antheridium persisting as a collar around its base  This arrangement of the antheridium is termed amphigynous (‘around the female’). In some species (e.g. P. cactorum, P. clandestina, P. medicaginis), both types of arrangement may be found one or the other may predominate, depending on strain and culture conditions.

Both the oogonia and antheridia contain several diploid nuclei, but as the oosphere matures only a single nucleus remains at the centre while the remaining nuclei are included in the periplasm, i.e. the space between the oosphere and the oogonial walls.

Meiosis occurs in the antheridium and oogonium. Fertilization tubes have been observed and a single haploid nucleus is introduced from the antheridium into the oosphere. Fusion between the oosphere nucleus and the antheridial nucleus is delayed. Even mature, dormant oospores may still be binucleate, karyogamy usually occurring after breakage of dormancy as a first step towards germination. Following fertilization,  oospore change to a resting state.

The oospore has a thin outer wall (epispore) which is derived from the periplasm and appears to consist of pectic substances. The inner oospore wall (endospore) is rich in b-1,3- glucans which form a major storage reserve.

Considering their thick walls and abundant storage reserves, it is not surprising that oospores are the longest-lived propagule of Phytophthora, being capable of surviving in soil for many years.