Plasmodiophora brassicae is the causal organism of club root or finger-and-toe disease of brassicas  and was first described by Woronin (1878). The disease is common in gardens where brassicas are frequently grown, especially if the soil is acidic and poorly drained. A wide range of brassicaceous hosts is attacked, and root-hair infection of some non-brassicaceous hosts can also occur.

The disease is widely distributed throughout the world.

Infected crucifers usually have greatly swollen roots. Both tap roots and lateral roots may be affected. Occasionally, infection results in the formation of adventitious root buds which give
rise to swollen stunted shoots.

Above ground, however, infected plants may be difficult to distinguish from healthy ones. The first symptom is wilting of the leaves in warm weather, although such wilted leaves often recover at night.

Later the rate of growth of infected plants is retarded so that they appear yellow and stunted. Plants infected at the seedling stage may be killed, but if infection is delayed the effect is much less severe and well-developed heads of cabbage, cauliflower, etc., can form on plants with quite extensive root hypertrophy (swelling of cells) and hyperplasia (enhanced division of cells). Microscopically, even infected root hairs are expanded at their tips to form club-shaped swellings which are sometimes lobed and branched. 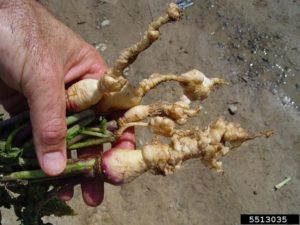 The process of infection:

Swollen roots contain a large number of small spherical resting spores, and when these roots decay the spores are released into the soil.

Electron micrographs show that the resting spores have spiny walls. The resting spore germinates to produce a single zoospore with two flagella of unequal length, both of the whiplash type and with the usual.

Germination of resting spores is stimulated by substances specific to Brassicaceae, possibly allyl isothiocyanates, which diffuse from the cabbage roots into the soil.

The primary zoospore (i.e. the first motile stage released from the resting spore) swims by means of its flagella, the long flagellum trailing and the short one pointing forward. Primary zoospores of P. brassicae are released some 26-30h after placing a suspension of resting spores close to seedling roots of cabbage.

The zoospores may collide several times with a root hair before becoming attached, and appear to be attached at a point opposite to the origin of the flagella. The flagella coil around the zoospore body, which becomes flattened against the host wall, and pseudopodium-like extensions of the zoospore develop, being continuously extended and withdrawn.

The flagella are then withdrawn, and the zoospore encysts, attached to the root hair. The zoospore cyst contains lipid bodies and a vacuole which enlarges during cyst maturation, which takes a few hours. The most conspicuous ultrastructural feature of mature cysts is a long Rohr (tube), with its outer end pointing towards the root hair wall. This end of the tube is occluded by a plug. Within the tube is a bullet-shaped Stachel (stylet), the outer part of which is made up of parallel fibrils. Behind the blunt posterior end of the stylet, the tube narrows to form a Schlauch (sac).

Within the infected root hair, the amoeba may divide into several uninucleate amoebae. Later the nuclei within each amoeba show cruciform divisions, giving rise to small multinucleate primary plasmodia.
Each plasmodium divides up to form a group (sorus) of roughly spherical thin-walled zoosporangia lying packed together in the host cell.
Each zoosporangium finally contains 48 uninucleate zoospores. These are morphologically identical to primary zoospores. Some mature zoosporangia become attached to the host cell wall and an exit pore develops at this point through which the zoospores escape. The zoospores of other sporangia are released into those with an exit pore. Occasionally, zoospores escape into the lumen of the host cell. Liberated zoospores can re-infect plant roots, thereby completing an asexual cycle.

Thirdly, infection experiments have established that resting sporangia are formed only if two genetically dissimilar nuclei are present which could be contributed either by two uninucleate zoospores or by a binucleate zoospore.

Plasmodia of P. brassicae have been shown to break through plant cell walls, thereby spreading an infection from root hairs into deeper tissues of the root cortex. A conceivable alternative would be their migration through plasmodesmata. 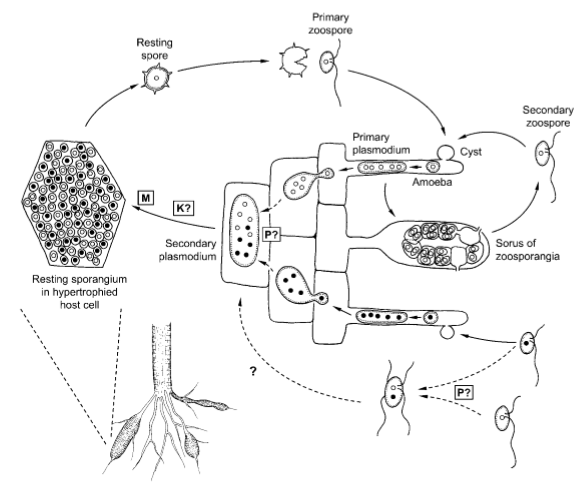 As the plasmodia within a host cell enlarge, the host nucleus remains active and undergoes repeated divisions. Hypertrophy and an increased ploidy of the host nuclei result, at least in callus culture experiments, because the mechanism for host cell division is apparently blocked. Unsurprisingly, the grossly hypertrophied clubs contain enhanced levels of plant growth hormones. The concentration of auxins (especially indole-3-acetic acid, IAA) in clubbed roots was measured to be about 1.7 times as high as in uninfected roots, and that of cytokinins was 2-3 times elevated. The hostpathogen interactions leading to enhanced auxin levels in clubbed roots are therefore very intricate. At first, only cortical cells of the young root are infected, but later small plasmodia can be found in the medullary ray cells and in the vascular cambium. Subsequently, tissues derived from the cambium are infected as they are formed.

In large swollen roots, extensive wedge shaped masses of hypertrophied medullary ray tissue may cause the xylem tissue to split. At this stage, the root tissue shows a distinctly mottled appearance. When the growth of the plasmodia is complete, they are transformed into masses of haploid resting spores. Only during the late stages of resting spore development do the host nuclei begin to degenerate. Eventually, the resting spores are released into the soil as the root tissues decay.

The control of club root disease is difficult. Because resting spores retain their viability in the soil for up to 20 years, short-term crop rotation will not eradicate the disease.

The fact that Plasmodiophora brassicae can infect brassicaceous weeds such as shepherd’s purse (Capsella bursa-pastoris).

Moreover, it is known that root hair infection can also occur on many ubiquitous nonbrassicaceous hosts such as Papaver and Rumex, or the grasses Agrostis, Dactyli.

All infections of non-brassicaceous hosts are probably reduced to the zoosporangial cycle, and no root clubs are formed.

General measures aimed at mitigating the incidence of clubroot traditionally include improved drainage and the application of lime, which retards the primary infection of root hairs.

Infection can be retarded by the application of mercury-containing compounds.

At present, no economically and ecologically acceptable fungicide appears to be available, although research efforts continue.