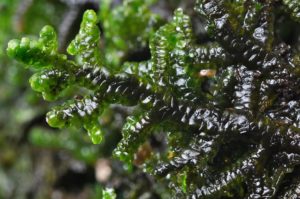 Most species of Porella are distributed in tropical to temperate regions. It grows on moist rocks, on the shaded sides of tree trunks.

It forms dense mats closely covering the ground. Some are aquatic and grow in cool waters. They are cosmopolitan. 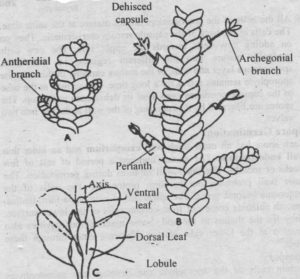 Plant body is gametophyte and composed of three parts

The plants of Porella are mostly dioecious. Only one specie is monoecious.

The male plants are smaller. Antheridia develop on special lateral branches.
The leaves adjacent to the sex organs are called bracts. A long-stalked antheridium is present in the axil of each bract. Each antheridium consists of a globular body or capsule and a long slender stalk. A large number of spermatozoids are present within the wall of capsule.

1.  The antheridial initial lies close to the growing apex of the male branch, This cell enlarges. It undergoes transverse division to form basal cell and upper cell.

6.  The jacket bursts due to swelling of the mass of androcytes. The antherozoids are then liberated from the androcytes (sperm cells) in water. The sperms swim in water and reach the archegonia. 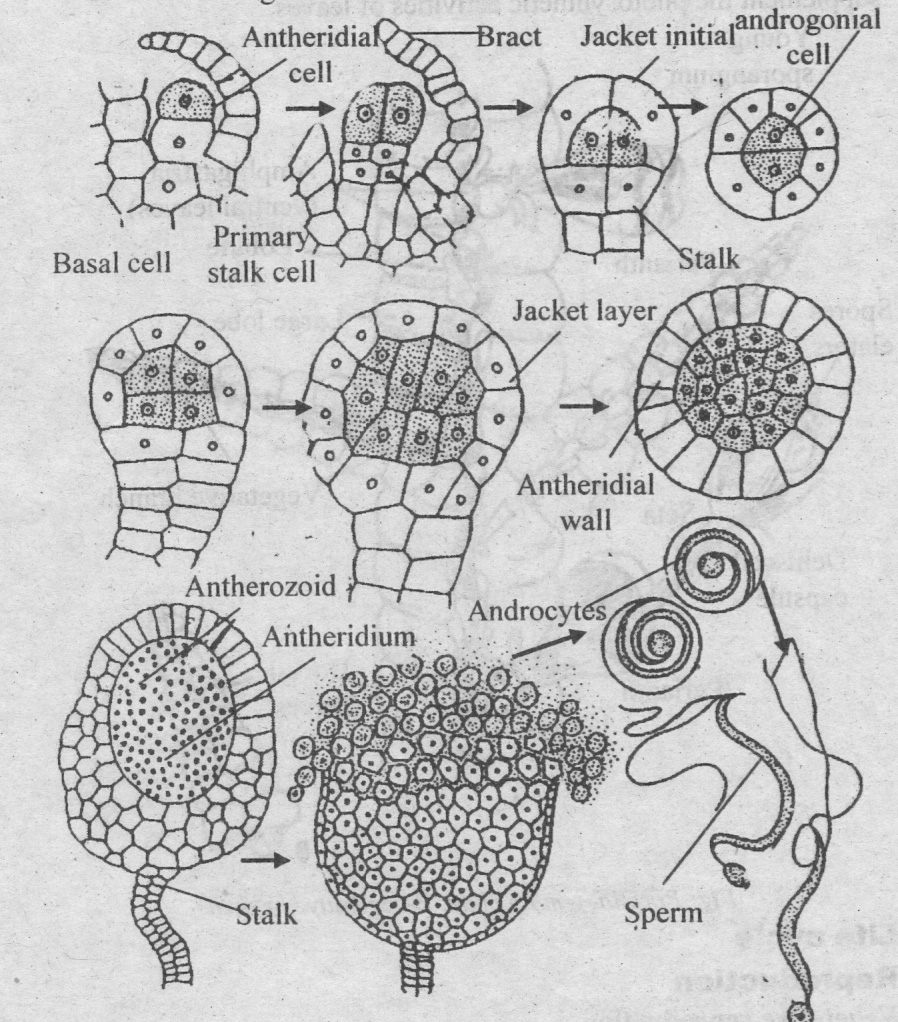 Fig: Stages of development of antheridia

The archegonium consists of neck and the venter. The neck consists of five vertical rows of neck cells. These cells enclose 6-8 neck canal cells.

1.  The archegonium develops from the apical cell. Each archegonial initial enlarges. It divides into basal cell and outer cell. 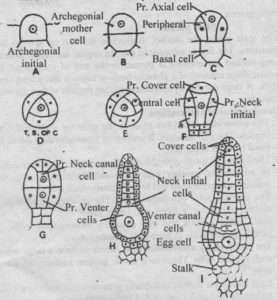 The neck canal cells and the venter canal cells of mature archegonia degenerate. They form mucilage-like substance. It exerts pressure and burst the cover cells. The mucilaginous fluid oozes out of ruptured neck and attracts the sperms. A large number of sperms collect near the neck. But only one of them passes down and fuses with the egg to form the oospore. 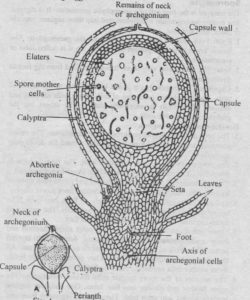 The oospore is the first cell of a sporophytic generation. It is diploid. The mature sporogonium is differentiated into three regions: capsule or theca, seta and foot.

1.  Foot: Foot absorbs water and food from the gametophyte. The
foot is lower expanded portion of the seta. So it is called false or pseudofoot.

2.  Seta: The seta is also very short. It conducts food from the foot to developing spores.

1.  The neck of the archegonium shrinks after fertilization. The venter continues to growth and form an envelope around the developing sporophyte.

2.  The oospore swells up and secretes a wall. The first division is transverse. It forms upper epibasal and the lower hypobasal cell.

3.  The hypobasal cell does not divide further and forms suspensor or haustorium. Suspensor is used to absorb food from parent plant.

5.  Upper cell divides many times to form outer amphithecium and inner endothecium. The amphithecium forms multi-layered jacket. The whole of endothecium functions as archesporium. All the sporogenous cells are not fertile. They differentiate into fertile spore mother cells and sterile elater mother cells.

7.  The elater mother cells form elaters. The elaters are long and narrow. They are scattered in between spores.

The mature capsule is covered by calyptra. The capsule opens by four valves along four lines. The valves separate and bend back upon themselves. So spores and elaters become free. 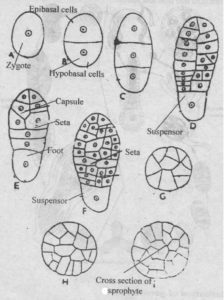 Fig: Development of Sporangium in Porella

The spores are haploid. They are first cell of gameiophytic generation. The spore germinates to produces a short protonema. The protonema may be single celled or filamentous. The terminal cell of the protonema divides in all direction forming a mass of cells. One of the cells in the mass functions as an apical cell. It produces a Maltose plant body. This body produces foliose plant which is A differentiated into stem and leaves.

2.  Sporophyte: The oospore is the first stage of sporophyte generation. It is diploid generation. Sporophyte has three parts: foot, seta and capsule. Haploid spores are produced in the capsule by meiosis. Spore is the first stage of gametophyte. Spores germinate to produce protonema stage. It gives rise to mature gametophyte completing the life cycle. 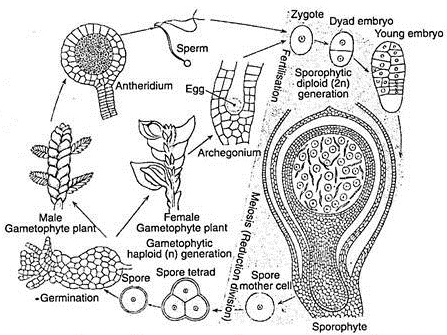