The reproduction by means of small spores is a cornerstone in the ecology of fungi. Although a single spore may have a negligible chance of reaching a suitable substrate, spores may be produced in such quantities that even discrete substrates can be exploited by the species as a whole. Only a few fungi make do without spores, surviving solely by means of mycelium and sclerotia. Spores may be organs of sexual or asexual reproduction, and they are involved in dispersal and survival.

Gregory (1966) distin- guished between xenospores (Gr. xenos= a foreigner) for spores which are dispersed from their place of origin and memnospores (Gr. memnon=steadfast, to persist), which stay where they were formed. Some spores are violently discharged from the organs which bear them, energy for dispersal being provided by the spore itself or the structure producing it. However, many spores are dispersed passively by the action of gravity, air or water currents, rain splash, or by animals, especially insects.

The morphology and structure of fungal spores show great variability,

from unicellular to multicellular,

thin- or thick-walled with hyaline or pigmented walls,

smooth or ornamented by mucilaginous extensions,

Single-celled spores are termed amerospores (Gr. a=not, meros=a art; i.e. not divided), two-celled spores are didymospores (Gr. didymos=double), spores with more than one transverse septum are phragmospores (Gr. phragmos=a hedge, barri- cade), and spores with transverse and longitudinal septa are dictyospores (Gr. diction=net). These terms may be qualified by prefixes indicating spore pigmentation such as hyalo– for colourless (hyaline) spores and phaeo– for spores with dark-coloured (melanized) walls.
Special terms have also been used to refer to spore shape. Scolecospores (Gr. skolex=a worm)
are worm-shaped, helicospores (Gr. helix= twisted or wound) are spores with a two- or three-dimensional spiral shape, whilst stauro– spores (Gr. stauros= a cross) have arms radiating from a central point or axis.

Some of the more common spore types are described below. There are numerous other, less-common kinds of spore found in fungi, and they are described later, in relation to the particular fungal groups in which they occur.

These are spores which are self-propelled by means of flagella. Propulsion is often coupled with chemotactic movement, zoospores having the ability to sense chemicals diffusing from suitable substrata and to move towards them, or gametes detecting and following extremely low concentrations of hormones. In some cases oxygen or light are also stimuli for tactic movement. The fungal groups which possess flagella are mostly aquatic or, if terrestrial, rely on water for dispersal or infection. Their zoospores are of four kinds. 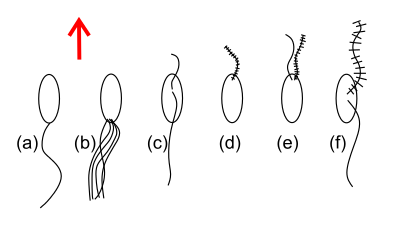 1. Posteriorly flagellate zoospores with flagella of the whiplash type are characteristic of the Chytridiomycota. This type of zoospore flagellation is termed opisthokont (Gr. opisthen= behind, at the back; kontos = a pole). (Fig 1.0 a)

2.  Biflagellate zoospores with two whiplash flagella of unequal length are called anisokont (Fig. 1.0 c) and are found in some Myxomycota and the Plasmodiophoromycota, both now classified among the Protozoa

3. Anteriorly uniflagellate zoospores with a flagellum of the tinsel type are characteristic of the Hyphochytriomycota. The axoneme sheath of the tinsel or straminipilous flagellum (Lat. stramen =straw; pilus = hair) is adorned by two rows of fine hairs (Fig. 1.0 d).

4. Biflagellate zoospores with anteriorly or laterally attached flagella, one of which is of the whiplash type and the other of the tinsel type (Figs. 1.0 e,f), are characteristic of the Oomycota. Zoospores with the two different kinds of flagellum are heterokont. Where the two types of flagellum are attached anteriorly, as in the first-released zoospores of Saprolegnia, their propulsive actions tend to work against each other and the zoospore is a very poor swimmer (Fig. 1.0 e). However, the secondary zoospore (termed the principal zoospore) in Saprolegnia and in many other Oomycota has laterally attached flagella, with the tinsel-type (pulling action) flagellum pointing forwards and the whiplash-type (pushing action) flagellum directed backwards and possibly acting as a rudder, jointly providing much more effective propulsion (Fig. 1.0 f).

In the Zygomycota, and especially in the Mucorales, the asexual spores are contained in globose sporangia  or cylindrical merosporangia. Because they are non-motile, the spores are sometimes termed aplanospores (Gr. a= not, planos= roaming).
The spores may be uni- or multinucleate and are unicellular.

They generally have thin, smooth walls and are almost always globose or ellipsoid in shape.

They are formed by cleavage of the sporangial cytoplasm.

They vary in colour from hyaline (colourless) to yellow, due to carotenoid pigments in the cytoplasm.

When mature, they may be surrounded by mucilage, in which case they are usually dispersed by rain splash or insects, or they may be dry and dispersed by wind currents. In some genera, e.g. Pilobolus, entire sporangia become detached.

Ascospores are the characteristic spores of the largest group of fungi, the Ascomycota or ascomycetes.

They are meiospores and are formed in the developing ascus as a result of nuclear fusion immediately followed by meiosis.

The four haploid daughter nuclei then divide mitotically to give eight haploid nuclei around which the ascospores are cut out.

In most ascomycetes, the eight ascospores are contained within a cylindrical ascus, from which they are squirted out together with the ascus sap when the tip of the turgid ascus breaks down and the elastic ascus walls contract. The distance of discharge may be 1cm or more.

Basidiospores are the sexual spores which characterize a large group of fungi, the Basidiomycota or basidiomycetes. In comparison with the morphological diversity of ascospores, basidiospores are more uniform. They also show a smaller size range, from about 3 to 20mm, which is possibly related to their unique method of discharge. They are normally found in groups of four attached by tapering sterigmata to the cell which bears them, the basidium.

Zygospores are sexually produced resting structures formed as a result of plasmogamy between gametangia which are usually equal in size. Nuclear fusion may occur early, or may be delayed until shortly before meiosis and zygospore germination. Zygospores are typical of Zygomycota. They are often large, thick-walled, warty structures with abundant lipid reserves and are unsuitable for long distance dispersal, usually remaining in the position in which they were formed and awaiting suitable conditions for further development. The gametangia which fuse to form the zygospore may be uninucleate or multinucleate, and correspondingly the zygospore may have one, two or many nuclei within it. Zygospore germination may be by a germ tube or by the formation of a germ sporangium. 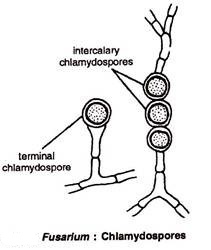 In most groups of fungi, terminal or intercalary segments of the mycelium may become packed with lipid reserves and develop thick walls within the original hyphal wall. The new walls may be colourless or pigmented, and are often hydrophobic. Structures of this type have been termed chlamydospores (Gr. chlamydos= a thick cloak). They are formed asexually. Generally there is no mechanism for detachment and dispersal of chlamydospores, but they may become separated from each other by the collapse of the hyphae producing them. 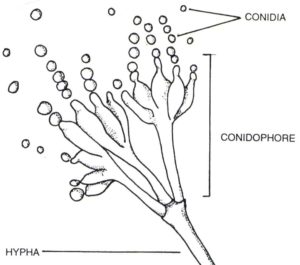 Conidiospores, commonly known as conidia, are asexual reproductive structures. The word is derived from the Greek konidion, a diminutive of konis, meaning dust (Sutton, 1986). Conidia are found in many different groups of fungi, but especially within Ascomycota and Basidiomycota.