This is a large genus of fungi often synonymized with the term ‘mushrooms’, distributed mainly in temperate regions. Agaricus spp. are saprotrophs, growing in pastures and woodland litter. The mycelium is perennial and some species and some species, e.g. A. arvensis (horse mushroom), A. xanthodermus (yellow stainer) and A. tabularis may fruit in rings.

From measurements of the annual rate of increase in diameter, a ring of A. tabularis 60 m in diameter was estimated to be 250 years old.

the stem (two rings in A. bitorquis), but no volva. The gills are at first pink due to the colour of the cytoplasm of the spores, but, as the spores mature, their walls darken to a purple-brown, the colour of the spore print. Many species have edible basidiocarps and some are prized as food, e.g. A. campestris (field mushroom), A. arvensis, A. macrosporus and A. silvaticus. Agaricus bisporus , now sometimes called A. brunnescens, is the cultivated white button mushroom and is occasionally found in nature on manure heaps, garden waste and roadsides. 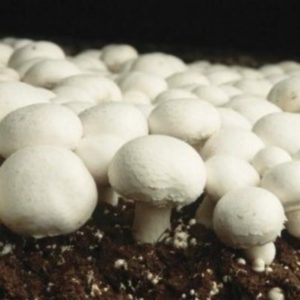 The white button mushroom has been cultivated for its edible fruit bodies for almost four centuries since collectors discovered that its spawn could be used to inoculate compost. The widespread cultivars used in the mushroom industry originated in France, where it is called champignon de Paris or champignon de couche. Mushroom cultivation is now an important industry in temperate countries. Mushrooms were originally cultivated in caves, but today most are grown in specially constructed sheds.

The basic substratum is a composted straw/manure mixture. The heap of compost is kept outdoors where it heats up naturally to 80°C over a period of 2 weeks, with occasional turning. The heat produced during composting selects for the growth of specialized thermophilic microbes, the most important of which for mushroom production is the anamorphic mould Scytalidium thermophilum.

The heat produced during composting destroys many competing microbes, and further destruction is achieved by a pasteurization process in which the compost, now moved into a shed, is heated by steam to a temperature of 60°C for 8 h which minimizes diseases caused later by other fungi.

After cooling, the compost is inoculated with mushroom spawn pre-grown on sterilized cereal grains. The inoculated compost is incubated at 25 °C for 2 weeks, and fruiting is induced by covering the colonized spawn with a 35 cm deep layer of casing soil or a special mixture of moist peat and chalk. The mycelium grows up through the casing layer and forms anastomosing mycelial cords from which ‘pinheads’ develop at the surface, some of which expand to form mature basidiocarps. In addition to any physical or chemical effect associated with the casing layer, there is also a biological component.

This is shown by the fact that sterilized casing soil is far less effective than natural soil in encouraging fruiting. Bacteria accumulate around Agaricus hyphae in a zone sometimes termed the hyphosphere.

Bacteria which are active in inducing basidiocarp formation might achieve their effect in two ways.
Possibly, they induce starvation of A. bisporus hyphae in a manner similar to fungistasis in soil, where the depletion of nutrients by competing microbes inhibits fungal spore germination.
An alternative idea is that bacteria in the casing layer absorb substances which retard the fruiting of A. bisporus. This idea is supported by observations that fruiting can be induced by replacing the casing layer with activated charcoal, believed to adsorb inhibitory substances. The isolation of putative inhibitors is a difficult task, but one substance, 1-octen-3-ol, has been shown to inhibit primordium formation in plate culture.
Two weeks after application of the casing layer, fruiting is stimulated by forced air ventilation which lowers the temperature to 20 °C and the CO2 concentration to 300-1000 ppm.
Cropping occurs after 10 days, followed by 23 more flushes at weekly intervals. The whole cycle from compost preparation to cropping is completed in 10 weeks.

Morphogenesis of A. bisporus basidiocarps

The pinheads which form at the surface of the casing soil attached to mycelial cords are basidiocarp primordia, consisting at first of loose aggregates of hyphae. The hyphal aggregates become compact and enlarge to form flattened ‘buttons’. When these are about 2 mm high, there are signs of reorientation of hyphae in the region of the gills, and a gap develops beneath the gill region as a result of programmed cell death (apoptosis) to form the hymenial chamber, enclosed below by the partial veil. At a height of about 5 mm the stipe becomes recognizable by the parallel arrangement of hyphae and, by the time the primordium has grown to a height of 10 mm, the orientation of the upper stalk region is complete.

Subsequent increase in height of the stipe is almost entirely due to cell expansion, although some nuclear and cell division also occur, especially in the upper region of the stipe where cell elongation is most marked.

The gills develop in radially arranged ridges made up of downward-growing hyphae terminating in a tightly packed palisade of cells which are the basidia. Although the hyphal segments making up the vegetative mycelium and the stipe are multinucleate, the number of nuclei in the basidia is reduced to two. As the pileus continues to expand, the partial veil is broken and persists as a ring attached to the stem. There is evidence that stipe elongation is promoted by a factor of unknown chemical identity, which is mainly produced by the ripening gills (Frazer, 1996). Konishi (1967) partially purified a substance which enhanced stipe elongation. The promoting substance included a mixture of amino acids, and it is not known if they function as nutrients or growth factors. It has also been claimed that a compound found chiefly in gill tissue of mushrooms, 10-oxo-trans-8-decenoic acid (ODA), stimulates mycelial growth and enhances elongation of the upper stipe (Mau et al., 1992). Unfortunately, attempts to confirm these findings have been disappointing (Champavier et al., 2000). Biochemical changes occur during basidiocarp development (Hammond, 1985; de Groot et al., 1998). Mannitol, glycogen and trehalose accumulate in basidiocarp primordia, lowering the water potential and thereby possibly causing uptake of water from the mycelium. This would lead to an increase in turgor pressure, causing cell enlargement and fruit body expansion (Hammond & Nichols, 1979). Rapid synthesis of chitin is correlated with stipe elongation (Craig et al., 1979). A hydrophobin-like protein is secreted by the vegetative mycelium of A. bisporus and an abundant hydrophobin (ABH1) forms hydrophobic rodlet layers on the surfaces of the cells in certain regions of the basidiocarp, especially those where there are air spaces, such as in the outer regions of the pileus and stipe, in the veil and in the core of the stipe, but not in the gills. The hydrophobic layer may be responsible for the non-wettability of the surface of the basidiocarp, preventing the inflow of water from the outside and possibly protecting against bacterial and fungal parasites (Lugones et al., 1996).