Albugo is an obligate parasite on a number of flowering plants. It is represented by 25 species. Albugo candida a common species responsible for the disease “white rust” on the members of family Crucieferae. 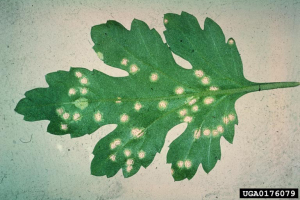 The vegetative pant body is composed of non-septate coenocytic hyphae that grow in the inter-cellular spaces of the host. the hyphae bear haustoria which are short, globular or knob shaped. They penetrate the cells of the host and absorb food material from it.

The asexual reproduction takes place by means of biflagellate zoospores formed inside the sporangia. In the very beginning the hyphae accumulate just beneath the epidermis of the infected leaf. From these hyphae, certain thick-walled, clavate aerial sporangiophores come out.

The terminal end of the sporangiophore becomes constricted and sporangium contains 5-8 nuclei and cytoplasm. Successively the sporangia develop by constriction method, in basigenous chains. In between each two sporangia a gelatinous pad develops acting as a separator of two sporangia from each other.

The sporangium is smooth, double- walled and rounded. When the sporangia are formed in abundance on innumerable sporangiophores, the pressure is caused; the host epidermis ruptures and hundreds of sporangia are seen on the surface of the host in the form of white creamy powder forming pustules. The sporangia are transferred from one place to another by various agencies such as wind, insects, water, etc. 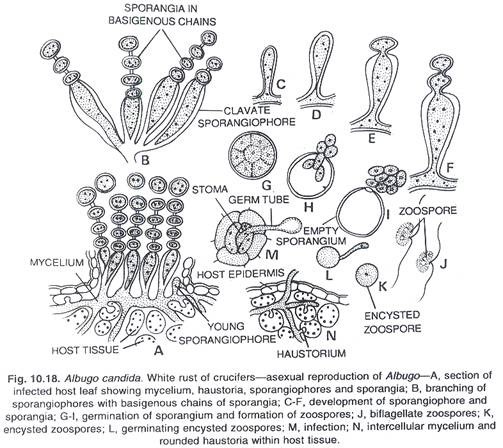 The cytoplasm, vacuoles and nuclei are uniformly distributed in the young oogonium. On the maturation of the oogonium the protoplasm of the oogonium differentiates into two regions. The outer region is called the periplasm containing thin cytoplasm, many nuclei and many vacuoles.

The antheridium develops on the terminal end of another hypha lying very close to the oogonium. The hyphal end swells, becomes club-shaped and separates from rest of the mycelium by a septum. This swollen multinucleate club-shaped portion is called the antheridium.

The oospore is thick-walled and three-layered. The outermost thick layer of the wall is warty in Albugo cadida. The oospore contains a large diploid (2n) nucleus. The reduction division (meiosis) is not yet seen in Albugo Candida but it has been observed in the other species of Albugo. 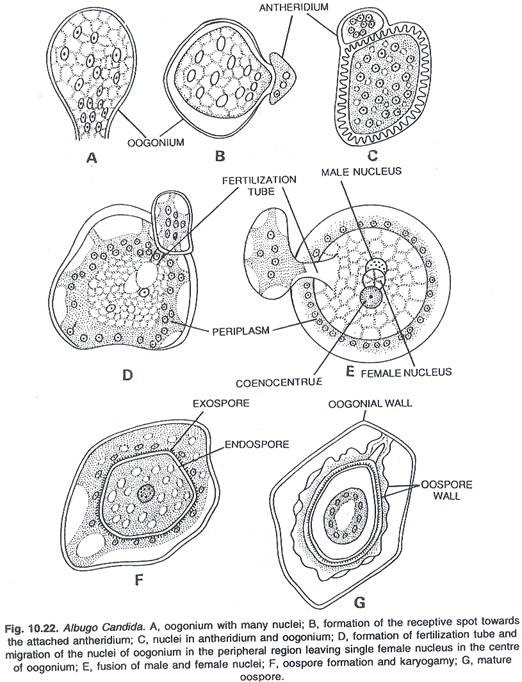 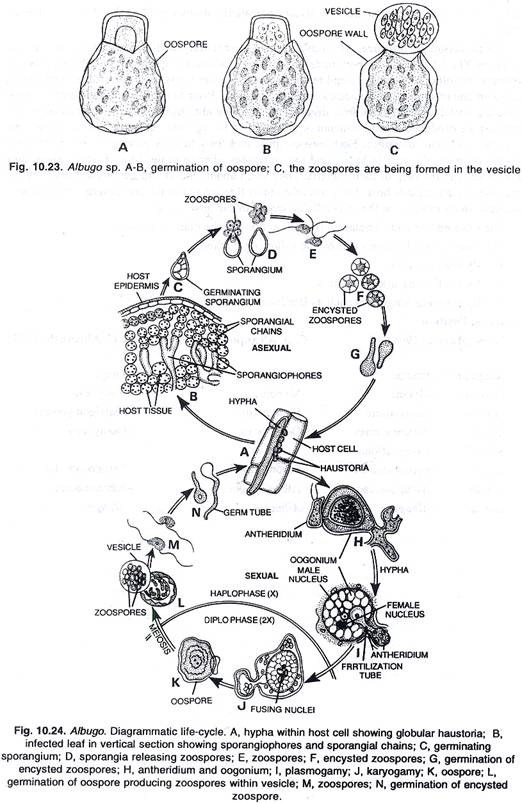 The oospores are perennating bodies and survive in adverse conditions. The 32 nucleate oospore undergoes a period of rest and germinates on the approach of favourable conditions of moisture and temperature. The outer warty wall of oospore bursts and a thin membrane of sessile vesicle comes out of the oospore.

Prior to extrusion of the contents in the vesicle the nuclei undergo the mitotic division repeatedly and a large number of unnucleate bits of protoplast are produced. Each bit metamorphoses into a biflagellate, reniform, naked, uninucleate and single vacuolate zoospore.

Each oospore produces forty to sixty zoospores. After extrusion from the oospore, the vesicle bursts and the zoospores liberate in the film of water where they move about with the help of their flagella. They swim about, encyst and germinate producing the germ tubes on the suitable host. The germ tube enters through the stoma and develops into the new mycelium which ramifies in the intercellular spaces of the host tissue.

The oospores remain dormant in the soil and infect the plants next year.

The disease may be controlled by the following methods:

3. By spraying fungicides such as Bordeaux mixture.