The basic type of plastid in the algae is a chloroplast, a plastid capable of photosynthesis. Chromoplast is synonymous with chloroplast; in the older literature a chloro plast that has a color other than green is often called a chromoplast. A proplastid is a reduced plastid with few if any thylakoids.
A proplastid will usually develop into a chloroplast although in some heterotrophic algae it remains a proplastid. A leucoplast 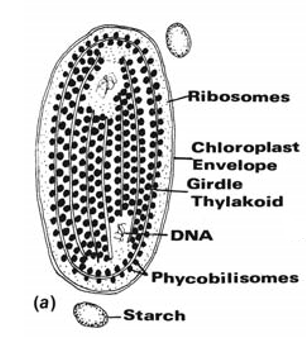 or amyloplast is a colorless plastid that has become adapted for the accumulation of storage product. 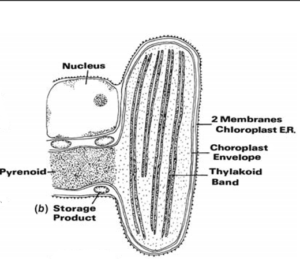 A pyrenoid is a differentiated region within the chloroplast that is denser than the surrounding stroma and may or may not be traversed by thylakoids. A pyrenoid is frequently associated with storage product. Pyrenoids contain ribulose-1, 5-bisphosphate carboxylase/oxygenase (Rubisco), the enzyme that fixes carbon dioxide. Consequently, the size of the pyrenoid will vary depending on how much Rubisco is present.
Rubisco exists in two forms

1 Form I occurs in some bacteria, the cyanobacteria, in all green plants and nongreen plants. Form I is composed of eight large subunits and eight small subunits. Form I has a high affinity for CO2 and a low catalytic efficiency (low rate of CO2 fixation). In green algae, euglenoids, and green plants, the large subunit is coded by chloroplast DNA and the small subunit by nuclear DNA. In the cyanelle (endosymbiotic cyanobacterium) of Cyanophora paradoxa and in some non-green algae, both subunits are coded by chloroplast DNA.

2 Form II occurs in some eubacteria and in the dinoflagellates and is composed of two large sub units. Form II has a low affinity for CO2 and a high catalytic efficiency. The common ancestor of all ribulose-1,5-bisphosphate carboxylase was probably similar to Form II and was adapted to the anaerobic conditions and high CO2 concentrations prevailing in the ancient earth. Form I evolved as the earth’s atmosphere became oxygenated, and CO2 concentration declined and with it the need for a greater affinity for CO2. The greater affinity for CO2 in Form I, however, came at the price of reduced catalytic efficiency.

Many motile algae have groups of tightly packed carotenoid lipid-globules that constitute an orange-red eyespot or stigma that is involved in response to light. Motile algae exhibit three types of responses to light