VEGETATIVE STRUCTURE/ THALLUS ORAGANIZATION
Thalli of algae show a range of organization starting from unicellular form to highly organized multicellular habit. The algal thalli are grouped into the following, based on their organization;
1. Unicellular: Composed of single cells, they may be motile or non-motile. Chlamydomonas, Diatoms.
2. Colonial form: Some algae are multicellular colonial. The cells are held together by a mucilaginous matrix. It forms colonies of different shapes. Some colonies have definite number of cells. Such colonies are called coenobia e.g.Volvox.
3. Filamentous forms: Cell are arranged in chains called filaments. The filaments may be branched or unbranched. There are different forms of filaments:
(a) Heterotrichous: The filament with prostate (horizontal) and vertical system are called heterotrichous. e.g. Ectocarpus
(b) Pseudoparenchymatous: Sometimes, filaments are loosely grouped to from pseudoparenchymatous body. e.g. Polysiphonia
(c) Coenocytic: Multinucleate filaments in which individual cells are without cross walls. e.g. Vaucharia 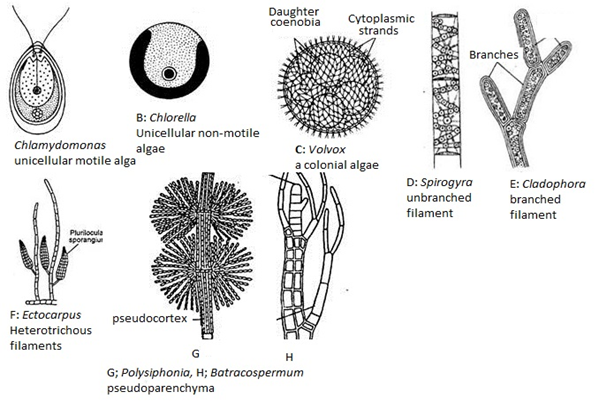