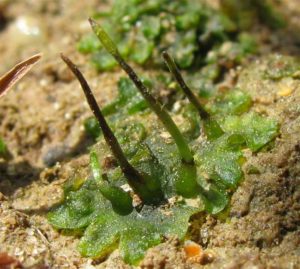 Anthoceros grows on moist soil. They are present in shady places or in the crevices of rocks. Anthoceros erecrus, A. himalayensis, and A. chambensis are commonly found in Western Himalayas.

Anthoceros has thallus body. It is lobed and it has irregular or dichotomous branches. The lobes have a wavy margin. Anthoceros form small rosette like plant. Unicellular rhizoids are attached to the underside of the thallus. Small mucilaginous cavities are present on the ventral side. These cavities contain colonies of a blue green alga like Nostoc. Stomata like small slits are present on the dorsal side of the thallus. Mucilage oozes out through these slits. 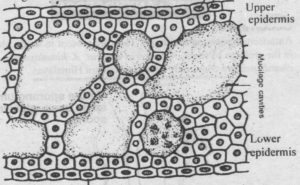 Internal Structure of the thallus

The thallus has uniform tissue of parenchymatous cells.
Epidermis is present on both sides. The cells in the upper region contain the chloroplasts. Generally each cell contains a single chloroplast. Each chloroplast has a pyrenoid. The thallus is thickest in the middle. It gradually becomes thinner towards the margins. Cells of the lower epidermis give rise to smooth unicellular rhizoids.

The growth occurs by single apical cell in initial stages. But mature plants have several scattered apical cells on the margin. So growth takes place at many points. It forms rosette like thallus.

1.   Death of older parts: Vegetative reproduction takes place by the death of older parts. Younger parts form new thallus.
2.   Tuber: Some thallus forms tubers. These tubers are rich in stored fats and proteins. These tubers germinate to on the margin of the lobes. They can survive long periods of drought. Tuber detach and from new plants.
3.  Gemmae: Gemmae are also produced on short stalks on the upper surface of the thallus. These are also act as vegetative reproductive bodies.

The antheridia are present on the upper side of the thallus in small cavities. They are found in groups of 2-4. The antheridial cavities are completely covered by a double layer of cells. They have no opening to the outside. Each antheridium is borne on a multicellular stalk. The main body of the antheridium is globose. It has a single celled thick jacket. Antheridia have mass of androgonial cells. They give rise to biflagellate antherozoids.

2.  The antheridial initial divides by one or two vertical divisions. It produces two or four cells. Each of which develops into an antheridium. Thus it gives rise to a group of antheridia in each cavity. 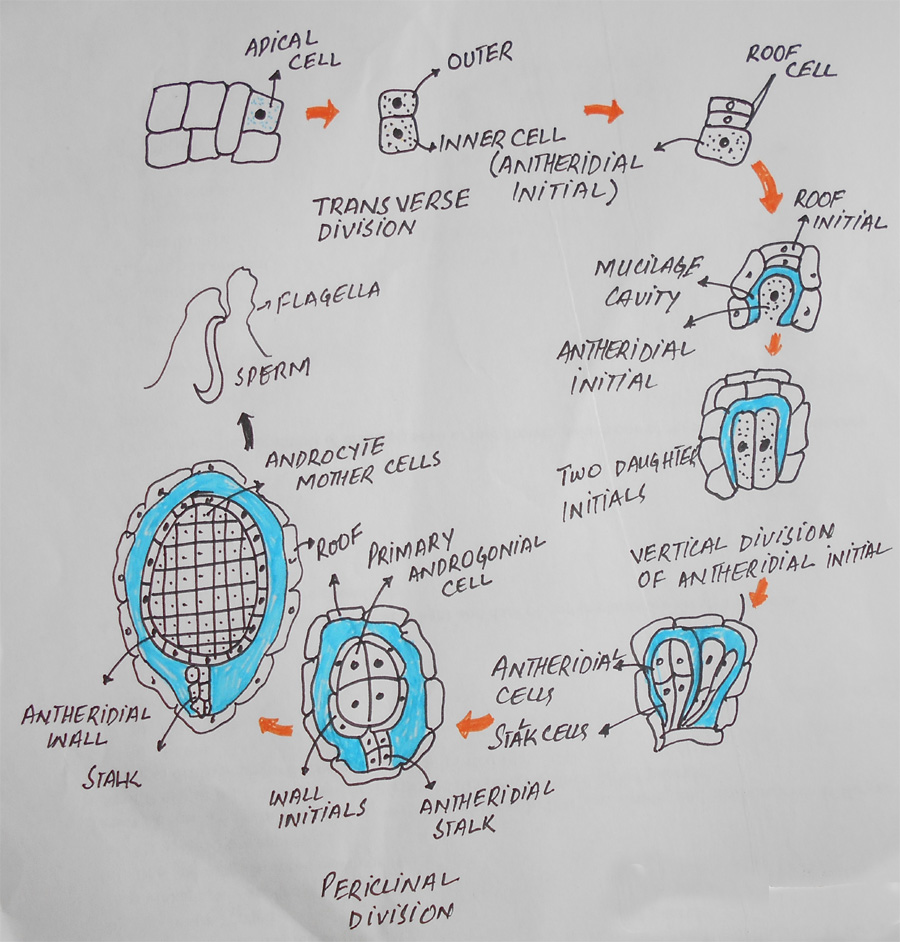 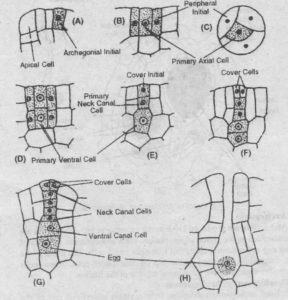 1.  Each archegonium develops from a single superficial cell of the thallus. The archegonial initial divides by three vertical divisions. It produces a large axial cell and three peripheral jacket initials.

2.  The axial cell divides transversely. It cuts off a small cover cell at the top. It divides into a lower primary ventral cell and an upper primary canal cell.

3.  The primary ventral cell divides transversely. It produces a larger egg or oosphere at the base and a small ventral canal cell at the top.

The sporophyte of Anthoceros has certain unique features. Sporogonium is borne on the gametophyte. But 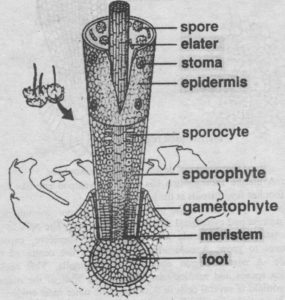 mature sporogonium does not totally dependent on the gametophyte.

Foot: A mature sporogonium has a well developed cup-like foot. This foot has few rhizoids at the base.

Capsule: Capsule forms the upper part of the sporogonium.
It is long, narrow and cylindrical. It has no distinct seta.
The cells in the basal part of the capsule are meristematic.
Therefore, capsule continues to grow. A columella is present in the centre of the capsule. A narrow region encircles the columella. This region contains spores and multicellular elaters.
The Wall of the mature sporogonium is several cells in thickness. The outer most epidermal layer has cutinized walls. The epidermis has small stomata with guard cells. The cells of the capsule wall contain chloroplasts. They can perform photosynthesis. Therefore, the sporophyte is not totally dependent on the gametophyte. The wall of the mature sporogonium ruptures at the apex into two valves. It exposes the columella and spores.

1.  The oospore divides by two vertical and one transverse division. It forms eight cells. These cells are arranged into two tiers of four cells.

2.  The cells of the lower tier divide to form massive foot. The foot penetrates into the tissue of the gametophyte. Certain cells on the lower surface of the foot form rhizoid like structures.

5.  Cells of the amphithecium divide to produce an outer layer of jacket initials and an inner layer of sporogenous tissue or archesporium.

6.  The jacket initials divides to form wall of the sporogonium.  The outer most layer of jacket become epidermis. It is cutinized. Some epidermal cells divide vertically to form guard cells around a small opening. The parenchymatous cells lying below the epidermis develop chloroplasts and form the photosynthetic tissue.

7.  The thickness of the sporogenous layer or archesporium is variable from single to four layered in different species. The cells of the sporogenous tissue arranged in alternate layers of larger and smaller cells. Larger cells are the spore mother cells. These cells divide meiotically to form four spores. The spores are arranged in tetrads. The smaller cells become elongated. They join together end to end and form simple or branched elaters.

8.  All the cells of the sporogonium do not mature at the same time. The cells at the base of the capsule remain meristematic. They go on adding new cells towards the upper side. The new cells gradually mature into the different regions, i.e. columella, sporogenous layer and wall, of the mature capsule. In this way the sporophyte remains active for a long time. The growth at the base of the capsule continues even after its dehiscence at the top. The spores are liberated by the rupturing of the wall at the top into two valves. 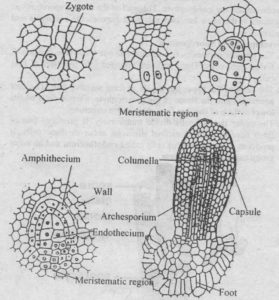 Each spore has an outer thick wall exosporium and an inner thin wall endosporium. The spores undergo a period of rest of few weeks or months. The outer wall ruptures during germination. The inner wall protrudes out to form protonema. The cells of the protonema become green. The apical cell of protonema form thallus. Smooth rhizoids come out from certain cells of the lower surface. They fix the thallus to the soil. Some mucilaginous cavities also develop at the lower side. Nostoc filaments enter through these tubes.

Certain cells of the sporophyte can develop into gametophytes directly under certain conditions. This phenomenon is called apospoty. It produces diploid gametophyte.

Anthoceros shows heteromorphic alternation of generation. Thallus is a gametophyte. It develops sex organs which produce the gametes. The gametes fuse to form oospore. Oospore gives rise to the sporophyte. The sporophytes are semi-independent. The tissue of the sporophyte is diploid. The spore mother cells undergo meiosis and give rise to spores. Spores germinate to form haploid gametophyte. 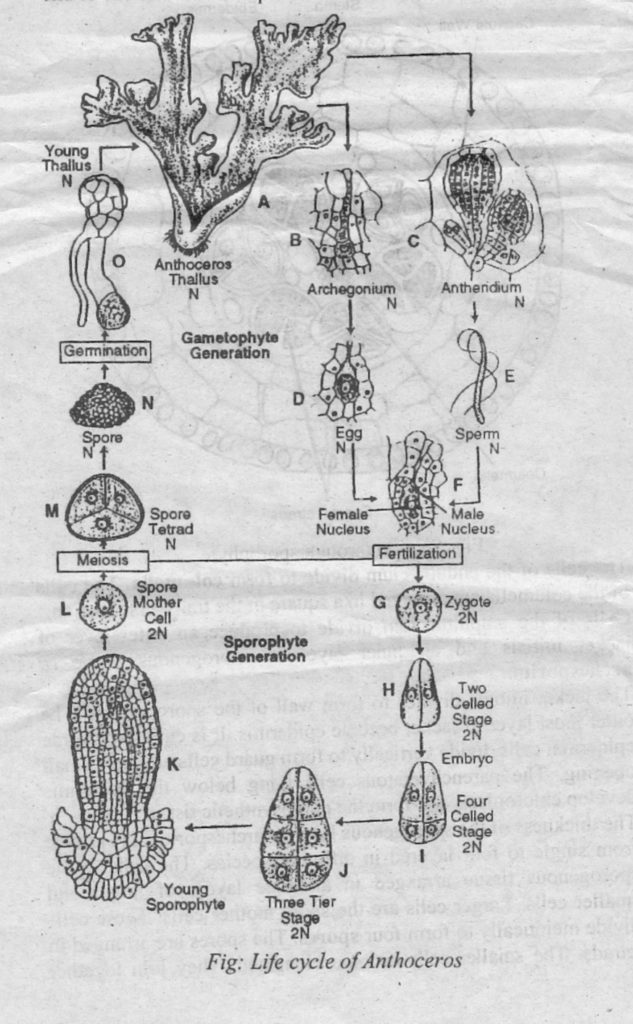