In yeasts and related fungi, the ascus arises directly from a single cell, but in most other ascomycetes it develops from a specialized hypha, the ascogenous hypha, which in turn develops from an ascogonium.

The ante-penultimate cell beneath the penultimate cell is termed the stalk cell. The terminal cell of the crozier curves round and fuses with the stalk cell, and this region of the ascogenous hypha may grow on to form a new crozier in which the same sequence of events is repeated. Repeated proliferation of the tip of the crozier can result in a tight cluster of asci in many ascomycetes or a succession of well-separated asci as in Daldinia concentrica. 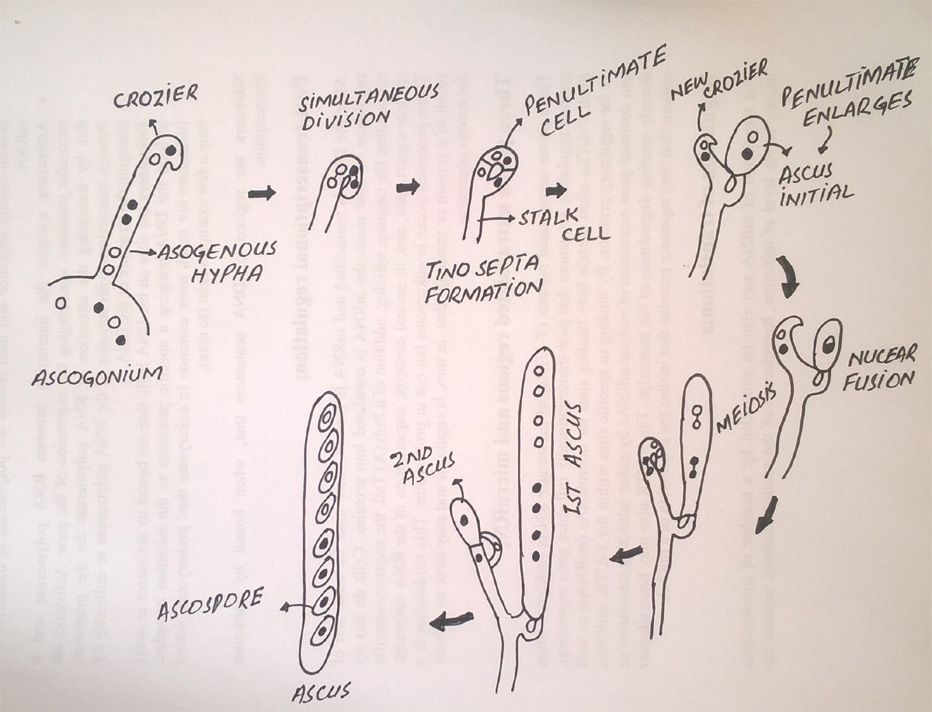 Specialized septal plugs, more elaborate than normal Woronin bodies, block the pores in the septa at the base of the ascus. The septal pore plugs probably aid in retaining the high turgor pressure which develops in asci shortly before ascospore discharge.

These nuclei then undergo a mitotic division so that eight haploid nuclei result. The eight nuclei may divide further mitotically so that each ascospore is binucleate, or, if still more mitoses follow, the ascospore becomes multinucleate.

For example, a single mitosis occurs in the immature ascospores of Neurospora crassa, and the spores remain binucleate for 23 days after they have been delimited.

Later, a series of four or more synchronous mitoses occur after the spores have become pigmented so that they contain 32 or more nuclei when they are mature. Where the ascospores are multicellular, there are repeated nuclear divisions accompanied by the formation of septa which divide up the spore. In some ascomycetes more than eight ascospores are formed, usually in numbers which are a multiple of eight, e.g. in the coprophilous genera Podospora and Thelebolus.

Asci with fewer than eight spores are also known, e.g. in Neurospora tetrasperma where the four ascospores are binucleate, in Phyllactinia guttata where there are two ascospores , or in Monosporascus cannonballus which has a single ascospore.