Home > Biotechnology > Genetics > Attenuation
Like regulation by the trp repressor, attenuation is a mechanism for reducing expression of the trp operon when levels of tryptophan are high. However, rather than blocking initiation of transcription, attenuation prevents completion of transcription.
When levels of tryptophan are high, attenuation causes RNA polymerase to stop prematurely when it’s transcribing the trp operon. Only a short, stubby mRNA is made, one that does not encode any tryptophan biosynthesis enzymes. Attenuation works through a mechanism that depends on coupling (the translation of an mRNA that is still in the process of being transcribed).
To understand attenuation, let’s zoom in on a region of the trp operon that we skimmed over in the sections above. This section lies between the operator and the first gene of the operon and is called the leader. The leader encodes a short polypeptide and also contains an attenuator sequence. The attenuator does not encode a polypeptide, but when transcribed into mRNA, it has self-complementary sections and can form various hairpin structures.

Once RNA polymerase has started transcribing the operon, a ribosome can attach to the still-forming transcript and begin translating the leader region. The polypeptide encoded by the leader is short, just 141414 amino acids long, and it includes two tryptophan (Trp) residues^11start superscript, 1, end superscript. The tryptophans are important because:
Why does it matter if the ribosome translates the leader quickly or slowly? As mentioned above, the leader is followed by an attenuator region, which (in its mRNA form) can stick to itself to form different hairpin structures. One structure includes a transcription termination signal, while the other does not end termination (and in fact, prevents formation of the terminator hairpin)^22squared. 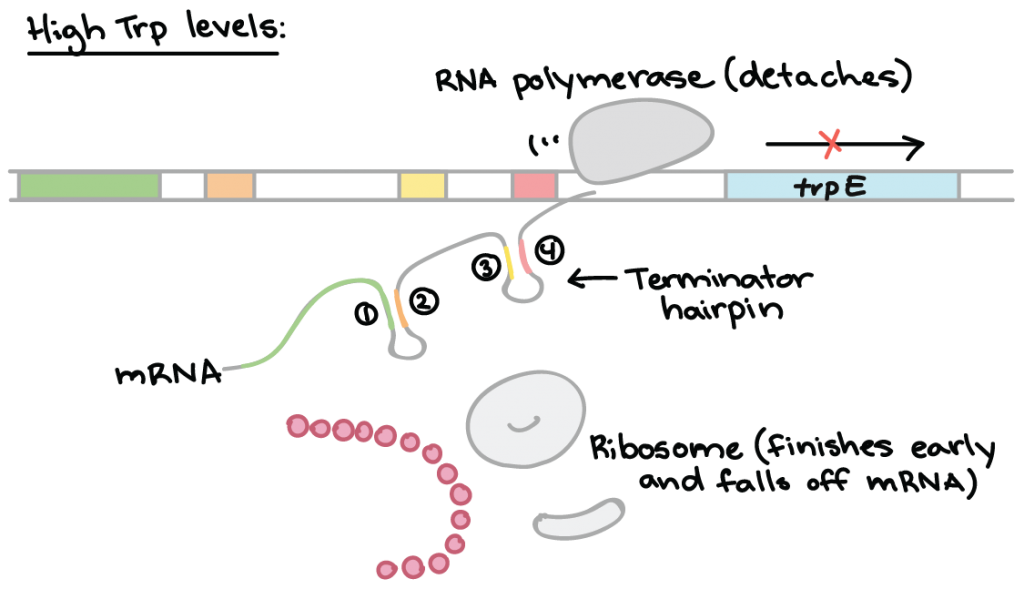