The first plant hormone we will consider is auxin. Auxin deserves pride of place in any discussion of plant hormones because it was the first growth hormone to be discovered in plants, and much of the early physiological work on the mechanism of plant cell expansion was carried out in relation to auxin action.

During the latter part of the nineteenth century, Charles Darwin and his son Francis studied plant growth phenomena involving tropisms. One of their interests was the bending of plants toward light. This phenomenon, which is caused by differential growth, is called phototropism. In some experiments the Darwins used seedlings of canary grass (Phalaris canariensis), in which, as in many other grasses, the youngest leaves are sheathed in a protective organ called the coleoptile

Coleoptiles are very sensitive to light, especially to blue light

If illuminated on one side with a short pulse of dim blue light, they will bend (grow) toward the source of the light pulse within an hour.

Thus they concluded that some sort of signal is produced in the tip, travels to the growth zone, and causes the shaded side to grow faster than the illuminated side.

in 1926 by Frits Went of the presence of a growth-promoting chemical in the tip of oat (Avena sativa) coleoptiles. It was known that if the tip of a coleoptile was removed, coleoptile growth ceased.

Went’s major breakthrough was to avoid grinding by allowing the material to diffuse out of excised coleoptile tips directly into gelatin blocks. If placed asymmetrically on top of a decapitated coleoptile, these blocks could be tested for their ability to cause bending in the absence of a unilateral light source

Because the substance promoted the elongation of the coleoptile sections, it was eventually named auxin from the Greek auxein, meaning “to increase” or “to grow.” 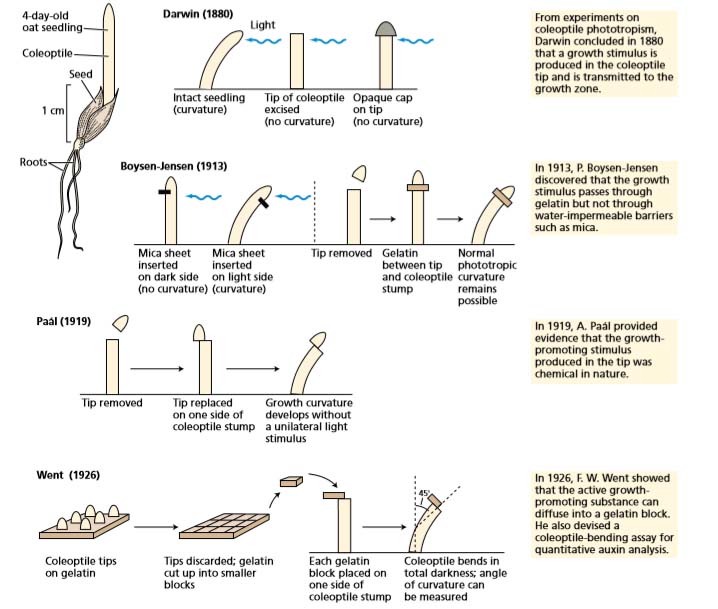 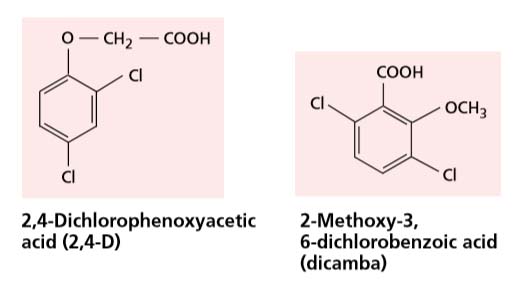 The auxin may be transported as active polar or passive polar.

Active polar: Auxin moves from the apex to the base (basipetal direction) with the help of metabolic energy, for example in coleoptiles and vegetative shoot apices.

Passive polar:  The normal transport in stems and petioles is from young leaves and through other living cells, including phloem parenchyma and parenchyma cells that surround vascular bundles.

Following are the important effects of auxins

Auxin was discovered as the hormone involved in the bending of coleoptiles toward light. The coleoptile bends because of the unequal rates of cell elongation on its shaded versus its illuminated side.

Auxin also has a role in regulating cellular differentiation. The most extensively studied system is the induction of vascular differentiation in shoots, which is under control of auxin produced in the young, rapidly developing leaves.

The differentiation of both xylem elements and phloem sieve tubes around the wound is limited and controlled by auxin supply.

Apparently the apical bud is able to exert a dominant inﬂuence that suppresses cell division and enlargement in the axillary bud. For this reason, the phenomenon of coordinated bud development is known as apical dominance.

Tropism: Responses to Stimulus of Light and Gravity:

Auxin plays important role in gravitropism and phototropism. According to Cholodny-Went theory, the phototropism  is due to unequal lateral distribution of auxin at the tip. The auxin concentration is higher on the shaded side then that on the illuminated side. The elongation of cells takes place at the shaded side. This differential growth causes curvature or bend towards the source of light.

Gravitropism: The curvature in response to gravity is the result of an increase in growth rate on the lower side of the horizontal coleoptile and a decrease on the upper side. 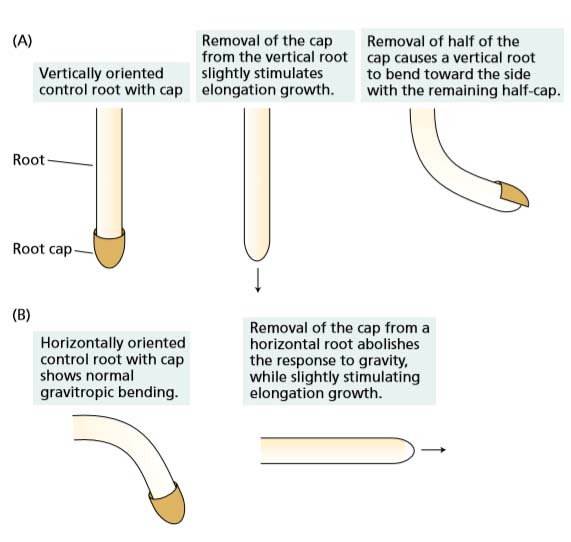 Fig: role of root cap and auxins in gravitropism

Apical dominance is the phenomenon by which presence of apical bud does not allow the nearby lateral buds to grow. When the apical bud is removed, the lateral buds sprout.

This produces dense bushy growth. The phenomenon is widely used in tea plucking and hedge making. Apical bud inhibits the growth of lateral buds by releasing auxins. It is confirmed by painting the cut end of decapitated shoot by a paste of auxin. The lateral buds remain inhibited, as if the apical bud is present.

High auxin levels stimulate the formation of adventitious roots (develop from any part except roots). This property of auxin very useful in propagation of plants by cuttings, e.g., rose.

Regulation of fruit development is controlled by auxins. Pollen, endosperm and embryo of developing seeds are rich source of auxins. These higher levels of auxins responsible for fruit set and growth.

In some plant species, seedless fruits may be produced naturally or by treating the unpollinated flowers with auxin. The production of such seedless fruits is called parthenocarpy. Auxin may act primarily to induce fruit set, which in turn may trigger production of auxin by certain fruit tissues to complete the development of the fruit.

Auxins stimulate the cambium and secondary growth. It enhances the cell division in cambium.

The auxins have been used commercially in agriculture and horticulture.

Application of auxins (e.g., IAA, IBA) to un-pollinated pistils make them develop into

seedless fruits or parthenocarps which carry a better market price.

Application of 2,4-D and 2,4,5-T removes broad leaved weeds in cereal crops and lawns because they do not affect mature monocotyledons while Dalapon (2,2-di-chloropropionic acid) kills grasses in broad leaved crops.

NAA and 2, 4-D are often employed for inducing flowering in Litchi and Pineapple.