Conjugation, the transfer of DNA by direct cell-to-cell contact, depends on the presence of a conjugative plasmid.  Plasmids are small, double-stranded DNA molecules that can exist independently of host chromosomes. They have their own replication origins, replicate autonomously, and are stably inherited.
Some plasmids are episomes, plasmids that can exist either with or without being integrated into host chromosomes.
Perhaps the best-studied conjugative plasmid is F factor. It plays a major role in conjugation in E. coli, and it was the first conjugative plasmid to be described.  The F factor is about 100,000 bases long and bears genes responsible for cell attachment and plasmid transfer between specific E. coli cells. Most of the information required for plasmid transfer is located in the tra operon, which contains at least 28 genes. Many of these direct the formation of sex pili that attach the F+ cell (the donor cell containing an F plasmid) to an F- cell.

They mixed two auxotrophic (a mutant strain of microorganism having nutritional requirements additional to those of the normal organism) strains, incubated the culture for several hours in nutrient medium, and then plated it on minimal medium.
To reduce the chance that their results were due to a reversion or suppressor mutation, they used double and triple auxotrophs on the assumption that two or three simultaneous reversion or suppressor mutations would be extremely rare.
When recombinant prototrophic colonies appeared on the minimal medium after incubation, they concluded that the two auxotrophs were able to associate and undergo recombination.
Lederberg and Tatum did not directly prove that physical contact of the cells was necessary for gene transfer.

This evidence was provided several years later by Bernard Davis (1919-1994), who constructed a U-tube consisting of two pieces of curved glass 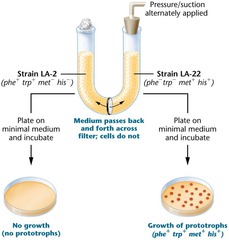 tubing fused at the base to form a U shape with a glass filter between the halves. The filter allowed passage of media but not bacteria. The U-tube was filled with a growth medium and each side inoculated with a different auxotrophic strain of E. coli. During incubation, the medium was pumped back and forth through the filter to ensure medium exchange between the halves. When the bacteria were later plated on minimal medium, Davis discovered that if the two auxotrophic strains were separated from each other by the filter, gene transfer did not take place. Therefore direct contact was required for the recombination that Lederberg and Tatum had observed.

In 1952 William Hayes (1913-1994) demonstrated that the gene transfer observed by Lederberg and Tatum was unidirectional. That is, there were definite donor (F+, or fertile) and recipient (F-, or nonfertile) strains, and gene transfer was nonreciprocal. He also found that in F+ X  F– mating, the progeny were only rarely changed with regard to auxotrophy (i.e., chromosomal genes usually were not transferred). However, F– strains frequently became F+.

These results are now understood and readily explained in the following way. An F+ strain contains an extrachromosomal F factor carrying the genes for sex pilus formation and plasmid transfer. The sex pilus is used to establish contact between the F+ and F– cells.
Once contact is made, the pilus retracts, bringing the cells into close physical contact. The F+ cell prepares for DNA transfer by assembling a type IV secretion apparatus, using many of the same genes used for sex pilus biogenesis; the sex pilus is embedded in the secretion structure. 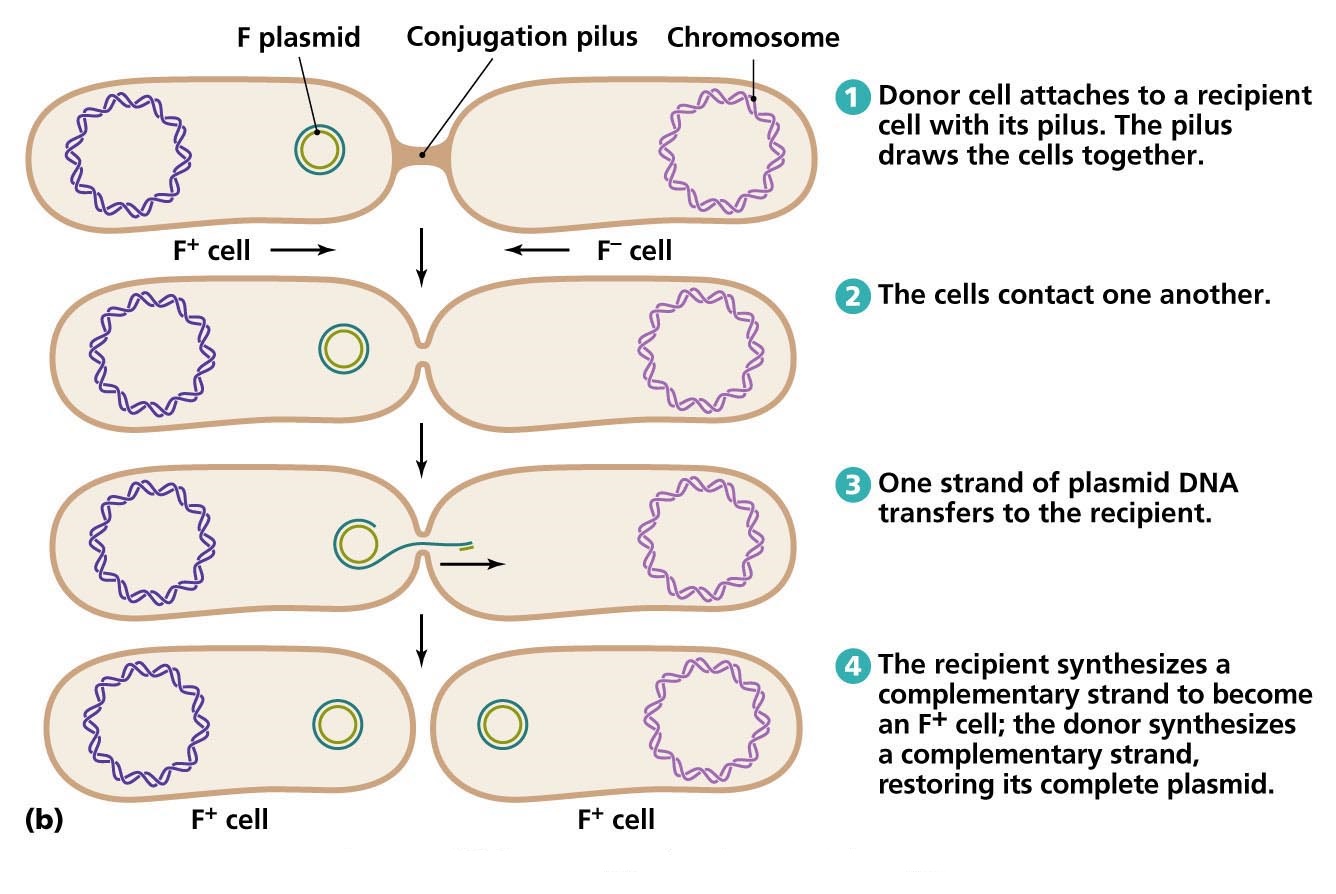 By definition, an F+ cell has the F factor free from the chromosome, so in an F+ X F– mating, chromosomal DNA is not transferred. However, within this population, a few cells have the F plasmid integrated into their chromosomes. This explains why not long after the discovery of F+ X F– mating, a second type of F factor-mediated conjugation was discovered. In this type of conjugation, the donor transfers chromosomal genes with great efficiency but does not change the recipient bacteria into F+ cells. Because of the high frequency of recombinants produced by this mating, it is referred to as Hfr conjugation and the donor is called an Hfr strain.

Hfr strains contain the F factor integrated into their chromosome, rather than free in the cytoplasm.

When integrated, the F plasmid’s tra operon is still functional; the plasmid can direct the synthesis of pili, carry out rolling-circle replication, and transfer genetic material to an F-recipient cell. However, rather than transferring just itself, the F factor also directs the transfer of the host chromosome. DNA transfer begins when the integrated F factor is nicked at oriT. As it is replicated, the F factor begins to move into the recipient. Initially only part of the F factor is transferred, followed by the donor’s chromosome. If the cells remain connected, the entire chromosome with the rest of the integrated F factor will be transferred; this takes about 100 minutes to accomplish. However, the connection between the cells usually breaks before this process is finished. Thus a complete F factor is rarely transferred, and the recipient remains F-.

When an Hfr strain participates in conjugation, bacterial genes are transferred to the recipient in either a clockwise or a counterclockwise direction around a circular chromosome, depending on the orientation of the integrated F factor. After the replicated donor chromosome enters the recipient cell, it may be degraded or incorporated into the F– genome by recombination. 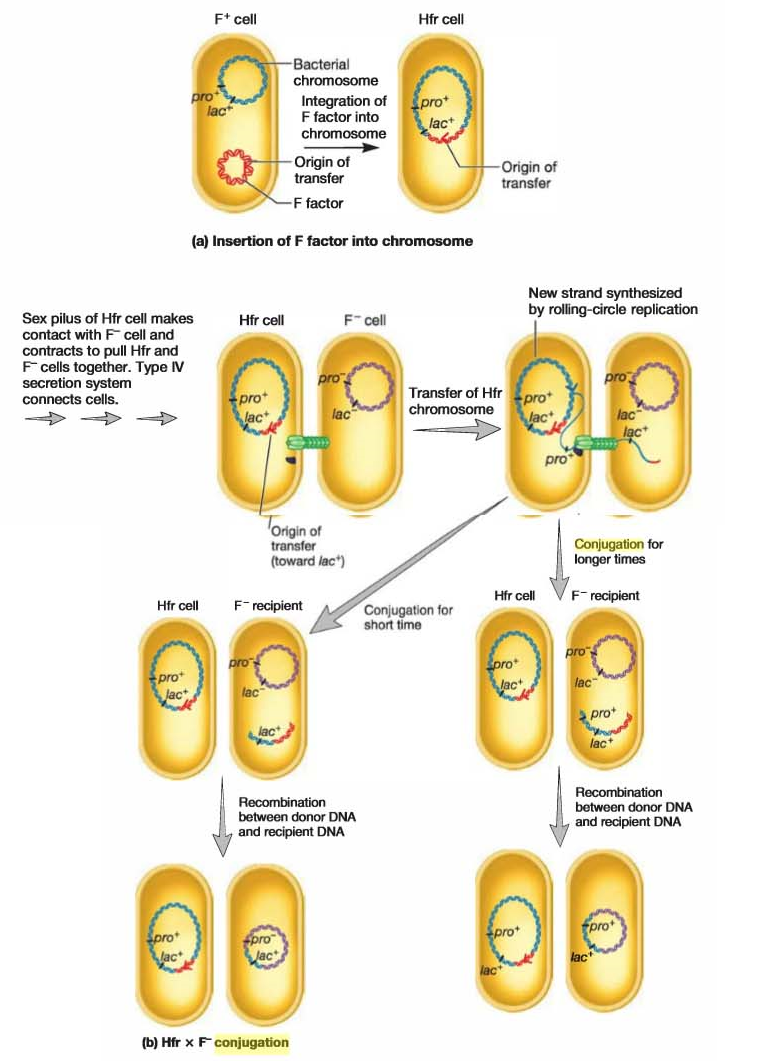 Because the F plasmid is an episome, it can leave the bacterial chromosome and resume status as an autonomous F factor. Sometimes during excision an error occurs and a portion of the chromosome is excised, becoming part of the F plasmid.

Because this erroneously excised plasmid is larger and genotypically distinct from the original F factor, it is called an F’ plasmid. A cell containing an F’ plasmid retains all of its genes, although some of them are on the plasmid. It mates only with an F- recipient, and F’ X F- conjugation is similar to an p+ X F- mating. Once again, the plasmid is transferred as it is copied by rolling-circle replication. Bacterial genes on the chromosome are not transferred, but bacterial genes on the F’ plasmid are transferred. These genes need not be incorporated into the recipient chromosome to be expressed. The recipient becomes F’ and is partially diploid because the same bacterial genes present on the F’ plasmid are also found on the recipient’s chromosome. In this way, specific bacterial genes may spread rapidly throughout a bacterial population.