It is also a mode of bacterial gene transfer, which is mediated by viruses.
It is a frequent mode of horizontal gene transfer in nature. Indeed evidence suggests that the number of genes moved by marine viruses from one host cell to another is huge (perhaps 1024 per year). Furthermore, viruses in marine environments and hot springs move genes between organisms in all three domains of life.

Virus particles are structurally simple, often composed of just a nucleic acid genome protected by a protein coat called the capsid.
Viruses are unable to multiply autonomously.
Instead, they infect and take control of a host cell, forcing the host to make many copies of the virus. Viruses that infect bacteria are called bacteriophages, or phages for short.

Virulent bacteriophages multiply in their bacterial host immediately after entry. After the progeny phage particles reach a certain number, they cause the host to lyse, so they can be released and infect new host cells. Thus this process is called the lytic cycle.

Temperate bacteriophages, on the other hand, do not immediately kill their host. Many temperate phages enter the host bacterium and insert their genomes into the bacterial chromosome. The inserted viral genome is called a prophage. The host bacterium is unharmed by this, and the phage genome is passively replicated as the host cell’s genome is replicated. The relationship between these viruses and their host is called lysogeny, and bacteria that have been lysogenized are called lysogens. Temperate phages can remain inactive in their hosts for many generations.

However, they can be induced to switch to a lytic cycle under certain conditions, including UV irradiation. When this occurs, the prophage is excised from the bacterial genome and the lytic cycle proceeds.

Transduction is the transfer of bacterial or archaeal genes by virus particles.

It is important to understand that host genes are packaged in the virus particle because of errors made during the virus’s life cycle. The virion containing these genes then transfers them to a recipient cell. Two kinds of bacterial transduction have been described: generalized and specialized

Generalized transduction occurs during the lytic cycle of virulent and some temperate phages.
Any part of the bacterial genome can be transferred can be transferred. During the assembly stage, when the viral chromosomes are packaged into capsids, random fragments of the partially degraded bacterial chromosome may mistakenly be packaged.
Because the capsid can contain only a limited quantity of DNA, the viral DNA is left behind.

The quantity of bacterial DNA carried depends primarily on the size of the capsid. The P22 phage of S. Typhimurium can carry about 1% of the bacterial genome; the Pl phage of E. coli and a variety of Gram-negative bacteria can package about 2.0 to 2.5% of the genome.

The resulting virion often injects the DNA into another bacterial cell but cannot initiate a lytic cycle. This phage particle is known as a generalized transducing particle and is simply a carrier of genetic information from the original bacterium to another cell. As in transformation, once the DNA fragment has been injected, it must be incorporated into the recipient cell’s chromosome to preserve the transferred genes. The DNA remains double stranded during transfer, and both strands are integrated into the recipient’s chromosome.

About 70 to 90% of the transferred DNA is not integrated but often is able to remain intact temporarily and be expressed. Abortive transductants are bacteria that contain this nonintegrated, transduced DNA and are partial diploids. 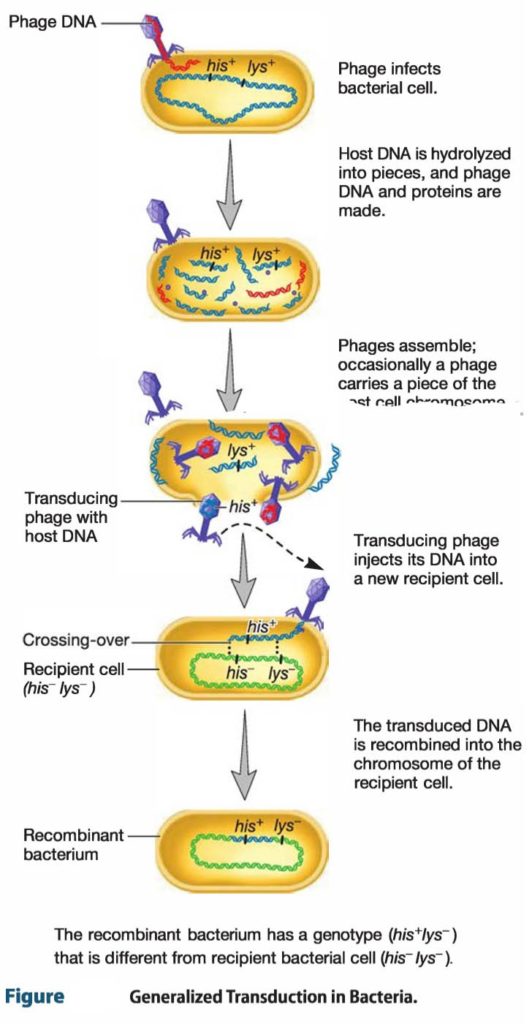 In specialized transduction, only specific portions of the bacterial genome are carried by transducing particles. Specialized transduction is made possible by an error in the lysogenic life cycle of phages that insert their genomes into a specific site in the host chromosome.
When a prophage is induced to leave the host chromosome, excision is sometimes carried out improperly. The resulting phage genome contains portions of the bacterial chromosome (about 5 to 10% of the bacterial DNA) next to the integration site, much like the situation with F’ plasmids.
However, the transducing particle is defective because it lacks some viral genes and cannot reproduce without assistance.
In spite of this, it will inject the remaining viral genome and any bacterial genes it carries into another bacterium. The bacterial genes may become stably incorporated under the proper circumstances.

The best-studied example of specialized transduction is carried out by the E. coli phage lambda.
The lambda genome inserts into the host chromosome at specific locations known as attachment or att sites.

The phage att sites and bacterial att sites are similar and can complex with each other.
The att site for lambda is next to the gal and bio genes on the E. coli chromosome; consequently when lambda excises incorrectly to generate a specialized transducing particle, these bacterial genes are most often present. The product of cell lysis (lysate) resulting from the induction of lysogenized E. coli contains normal phage and a few defective transducing particles. These particles are called lambda dgal if they carry the galactose utilization genes or lambda dbio if they carry the bio from the other side of the att site. 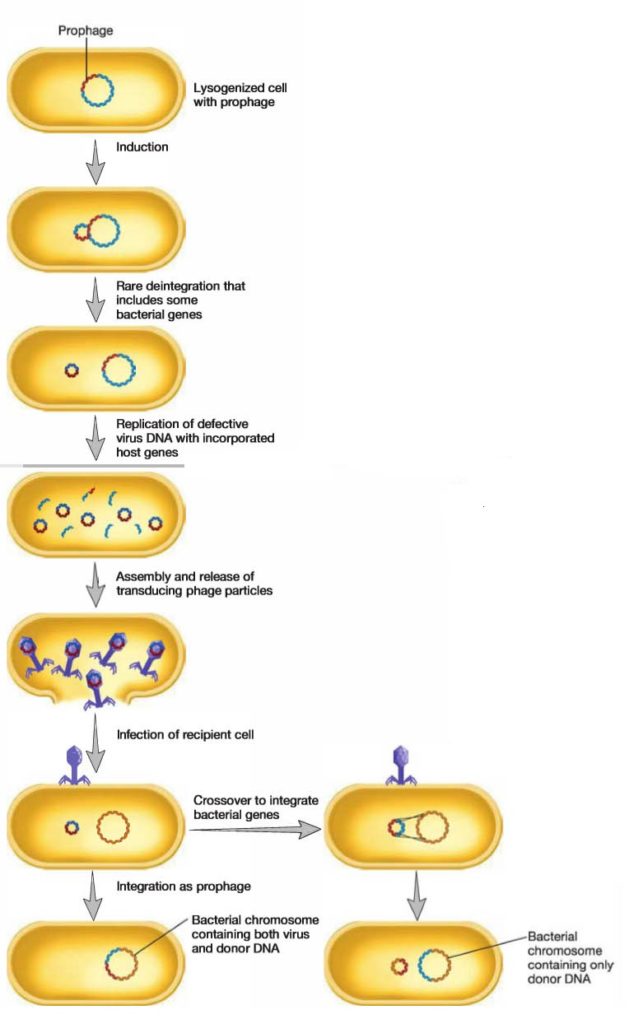