It is another way, DNA can move between bacteria is through transformation, discovered by Fred Griffith in 1928.
Transformation is the uptake by a cell of DNA, either a plasmid or a fragment of linear DNA, from the surroundings and maintenance of the DNA in the recipient in a heritable form.
In natural transformation, the DNA comes from a donor bacterium. The process is random, and any portion of the donor’s genome may be transferred. When bacteria lyse, they release considerable amounts of DNA into the surrounding environment. These fragments may be relatively large and contain several genes.

If a fragment contacts a competent cell (a cell that is able to take up DNA and be transformed) the DNA can be bound to the cell and taken inside. The transformation frequency of very competent cells is around 10-3 for most genera when an excess of DNA is used. That is, about one cell in every thousand will take up and integrate the gene. 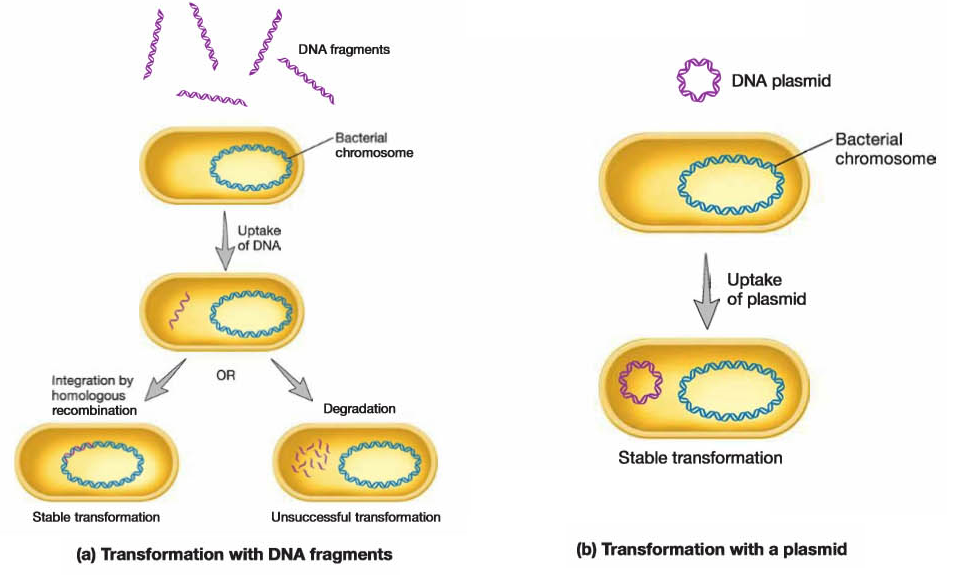 For the first stage of the transforming principle experiment, Griffith showed that mice injected with III-S died but when injected with II-R lived and showed few symptoms.

The next stage showed that if the mice were injected with type III-S that had been killed by heat, the mice all lived, indicating that the bacteria had been rendered ineffective.

The interesting results came with the third part of the experiment, where mice were injected with a mixture of heat killed III-S and live II-R.

Interestingly enough, the mice all died, indicating that some sort on information had been passed from the dead type III-S to the live type II-R. Blood sampling showed that the blood of the dead mice contained both live type III-S and live type II-R bacteria. 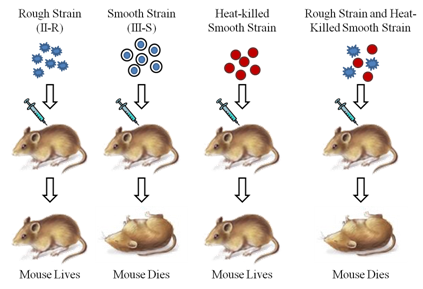