Botulinum toxin is the most toxic substance known. It is made by the anaerobic bacterium, Clostridium botulinum , and is the cause of botulism, a severe form of food poisoning. It has been proposed as a biowarfare agent but has actually found its most frequent application in cosmetics, under the name Botox . (Perhaps there’s hope for the human race after all!) It is also used to treat a few clinical conditions where a muscle relaxant is needed.

Botulinum toxin is a neurotoxin that blocks transmission of signals from nerves to muscles, thus causing muscular paralysis. The incredible potency of botulinum toxin is due to its enzyme activity—it is a zinc proteinase that cleaves proteins of the neuromuscular junction that are required for release of the neurotransmitter acetylcholine. Death is generally due to paralysis of the lungs and respiratory failure.

Clostridium botulinum almost never causes infections but will grow in canned food that has not been thoroughly sterilized. Botulinum toxin then accumulates in the contaminated food and, if ingested, may cause botulism. The bacteria are actually widespread, and traces are often present in food. The problem arises when contaminated food is not sterilized and is stored under anaerobic conditions that allow Clostridium to multiply. If the food is not heated thoroughly (which destroys the toxin), poisoning may occur.

Botulinum toxin lacks a leader sequence, and instead of being secreted it is released by bacterial lysis. The toxin is synthesized as a single inactive precursor protein. This is then cleaved to give a heavy chain (the binding protein; MW approximately 100,000) plus a light chain (the actual toxin; MW approx 50,000). These are held together by a disulfide bond.

Botulinum toxin is actually produced in a complex with a hemagglutinin, which causes blood cells to clump or agglutinate, and other associated proteins. The genes encoding these components are clustered together in two operons, transcribed in opposite directions. They are controlled by an activator gene, botR , which lies between the two structural gene operons. The toxin gene cluster is found on the chromosome, on plasmids, or on bacteriophages integrated into the chromosome, depending on the strain of Clostridium botulinum.

The toxin binds very strongly to peripheral nerve synapses, in particular those of neuromuscular junctions, and blocks the release of the neurotransmitter acetylcholine. The toxin binds specifically to receptors in the synapse membrane and is taken up as a whole into vesicles. At this point, the two chains separate and, as is typical for A and B toxins, only the toxic component (light chain) enters the eukaryotic cytoplasm and the binding protein (heavy chain) is left behind in the vesicle.

Botulinum toxin is a Zn-dependent protease that cleaves the SNARE proteins involved in acetylcholine release by the synapse. In actuality, several different variants of the toxin exist, made by different strains of Clostridium botulinum . Each toxin variant acts at a different site on one of the three SNARE proteins (SNAP25, synaptobrevin, and syntaxin). Botulinum toxin type A is the toxin variant that is used both clinically and for cosmetic treatment. It cleaves SNAP25.

Terrorists of the Japanese cult Aum Shinrikyo have attempted to use botulinum toxin. Aerosols were dispersed at various sites in Tokyo and at U.S. military installations in Japan on several occasions between 1990 and 1995. The attacks failed, mainly because they used strains of Clostridium botulinum that failed to produce toxin.

Botulinum toxin inhibits the muscle contraction responsible for wrinkles and frown lines. Treatment with extremely dilute preparations of botulinum toxin A (Botox) is now used to remove wrinkles from the skin of the old and ugly—provided they can afford the expense. Botox injections cost from $300 to $500 and the results last for about 5 months. They are the most rapidly growing form of cosmetic medicine and more than 1.6 million people received injections in 2001. Botox parties cater to this trend and reduce the price by selling in bulk. The patients (or customers?) mingle, chat, and consume refreshments. During the festivities each of them slips away individually for a few minutes for the injections. 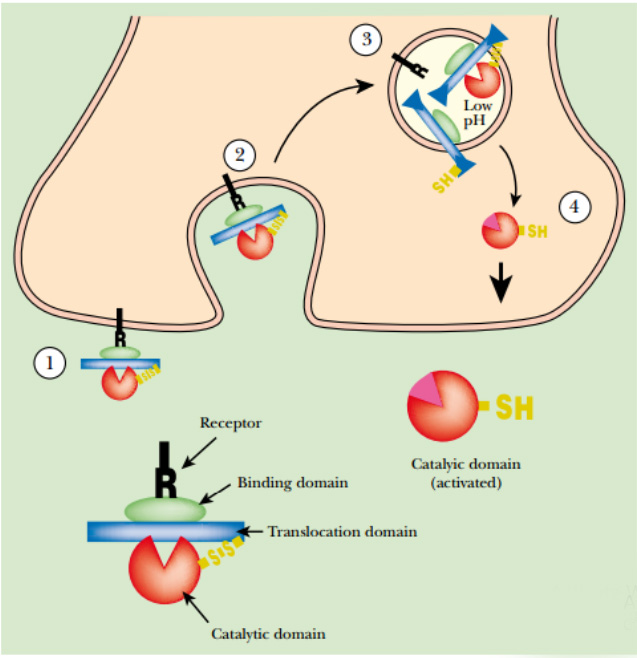 FIGURE  Uptake of Botulinum Toxin
Current view of botulinum toxin entry at nerve terminals. (1) Toxin binds to the nerve cell membrane at an as-yetunidentified receptor. (2) Internalization inside endocytotic vesicles, whose interior is acidified by an ATP-driven proton pump. (3) At low pH, the toxin changes conformation and inserts into the vesicle membrane. The light chain (red) is released into the cytosol. (4) In the cytosol the light chain degrades one of the three SNARE proteins