Although the science of genetics is young — almost entirely a product of the past 100 years — people have been using genetic principles for thousands of years.

The first evidence that humans understood and applied the principles of heredity is found in the domestication of plants and animals, which began between approximately 10,000 and 12,000 years ago. Early nomadic people depended on hunting and gathering for subsistence but, as human populations grew, the availability of wild food resources declined. This decline created pressure to develop new sources of food; so people began to manipulate wild plants and animals, giving rise to early agriculture and the first fixed settlements. Initially, people simply selected and cultivated wild plants and animals that had desirable traits. Archeological evidence of the speed and direction of the domestication process demonstrates that people quickly learned a simple but crucial rule of heredity: like breeds like. By selecting and breeding individual plants or animals with desirable traits, they could produce these same traits in future generations.

The world’s first agriculture is thought to have developed in the Middle East, in what is now Turkey, Iraq, Iran, Syria, Jordan, and Israel, where domesticated plants and animals were major dietary components of many populations by 10,000 years ago. The first domesticated organisms included wheat, peas, lentils, barley, dogs, goats, and sheep. Selective breeding produced woollier and more manageable goats and sheep and seeds of cereal plants that were larger and easier to harvest. By 4000 years ago, sophisticated genetic techniques were already in use in the Middle East. Assyrians and Babylonians developed several hundred varieties of date palms that differed in fruit size, color, taste, and time of ripening. An Assyrian bas-relief from 2880 years ago depicts the use of artificial fertilization to control crosses between date palms.

Other crops and domesticated animals were developed by cultures in Asia, Africa, and the Americas in the same period.

Ancient writings demonstrate that early humans were aware of their own heredity. Hindu sacred writings dating to 2000 years ago attribute many traits to the father and suggest that differences between siblings can be accounted for by effects from the mother. These same writings advise that one should avoid potential spouses having undesirable traits that might be passed on to one’s children.
The Talmud, the Jewish book of religious laws based on oral traditions dating back thousands of years, presents an uncannily accurate understanding of the inheritance of hemophilia. It directs that, if a woman bears two sons who die of bleeding after circumcision, any additional sons that she bears should not be circumcised; nor should the sons of her sisters be circumcised, although the sons of her brothers should.  The ancient Greeks gave careful consideration to human reproduction and heredity. The Greek physician Alcmaeon (circa 520 B.C.) conducted dissections of animals and proposed that the brain was not only the principle site of perception, but also the origin of semen. This proposal sparked a long philosophical debate about where semen was produced and its role in heredity. The debate culminated in the concept of pangenesis, which proposed that specific particles, later called gemmules, carry information from various parts of the body to the reproductive organs, from where they are passed to the embryo at the moment of conception.
Although incorrect, the concept of pangenesis was highly influential and persisted until the late 1800s. Pangenesis led the ancient Greeks to propose the notion of the inheritance of acquired characteristics, in which traits acquired during one’s lifetime become incorporated into one’s hereditary information and are passed on to offspring; for example, people who developed musical ability through diligent study would produce children who are innately endowed with musical ability. The notion of the inheritance of acquired characteristics also is no longer accepted, but it remained popular through the twentieth century.
Aristotle believed that both males and females made contributions to the offspring and that there was a struggle of sorts between male and female contributions.
Although the ancient Romans contributed little to the understanding of human heredity, they successfully developed a number of techniques for animal and plant breeding; the techniques were based on trial and error rather than any general concept of heredity 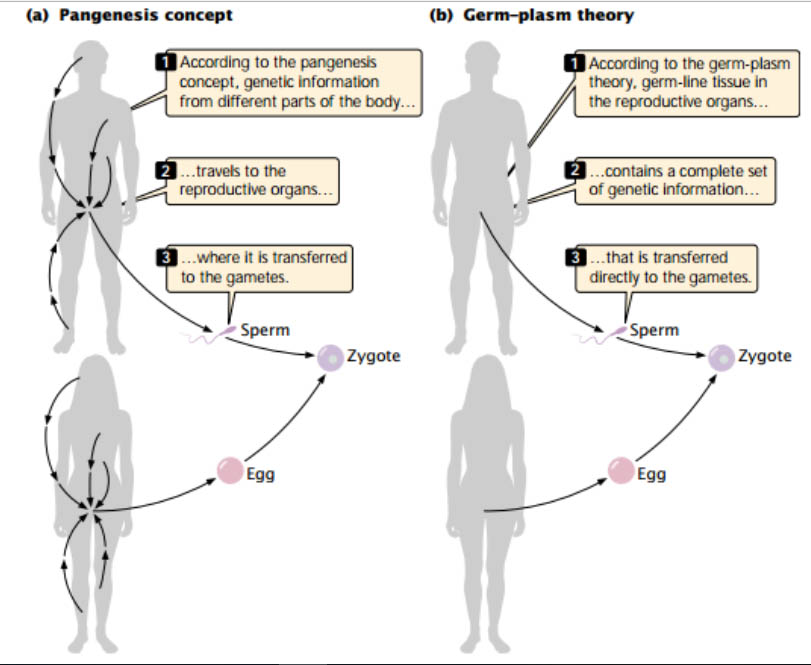 Fig: Pangenesis, an early concept of inheritance, compared with the modern germ-plasm theory

The Rise of Modern Genetics:

Dutch spectacle makers began to put together simple microscopes in the late 1500s, enabling Robert Hooke (1653–1703) to discover cells in 1665. Microscopes provided naturalists with new and exciting vistas on life, and perhaps it was excessive enthusiasm for this new world of the very small that gave rise to the idea of preformationism.

According to preformationism, inside the egg or sperm existed a tiny miniature adult, a homunculus, which simply enlarged during development. Ovists argued that the homunculus resided in the egg, whereas spermists insisted that it was in the sperm. 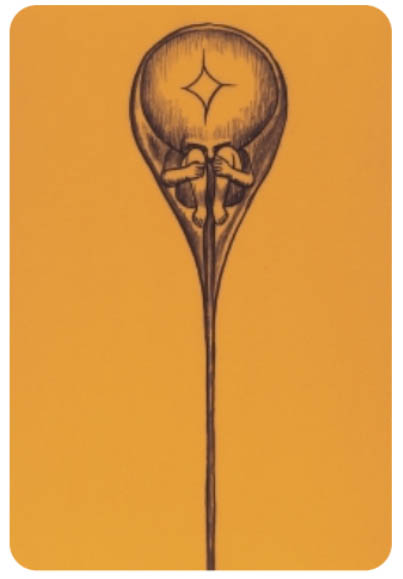 Fig: Preformationism was a popular idea of
inheritance in the seventeenth and eighteenth
centuries. Shown here is a drawing of a homunculus
inside a sperm

Preformationism meant that all traits would be inherited from only one parent—from the father if the homunculus was in the sperm or from the mother if it was in the egg.

Although many observations suggested that offspring possess a mixture of traits from both parents, preformationism remained a popular concept throughout much of the seventeenth and eighteenth centuries

Another early notion of heredity was blending inheritance, which proposed that offspring are a blend, or mixture of parental traits.

“This idea suggested that the genetic material itself blends, much as blue and yellow pigments blend to make green paint. Once blended, genetic differences could not be separated out in future generations, just as green paint cannot be separated out into blue and yellow pigments. Some traits do appear to exhibit blending inheritance; however, we realize today that individual genes do not blend.”

Charles Darwin (1809 – 1882), one of the most influential biologists of the nineteenth century, put forth the theory of evolution through natural selection and published his ideas in On the Origin of Species in 1856. Darwin recognized that heredity was fundamental to evolution, and he conducted extensive genetic crosses with pigeons and other organisms. However, he never understood the nature of inheritance, and this lack of understanding was a major omission in his theory of evolution.

Wolff (1738-1794), proposed this theory according to epigenesis egg or sperm cell do not contain mininature human instead they produced during development. It is universally accept.

This theory was given by Charles Darwin, this states that very small but invisible copies of human body organs and components are transported by the blood streams to the sex organ.

This theory given by August Weismann, body tissue are of two types, germplasm and somatoplasm. Any changes in the somatoplasm will leads the changs in the next generation. This theory is accepted in the broad sense.

The year 1900 was a watershed in the history of genetics. Gregor Mendel’s pivotal 1866 publication on experiments with pea plants, which revealed the principles of heredity, was “rediscovered,”. The significance of his conclusions was recognized, and other biologists immediately began to conduct similar genetic studies on mice, chickens, and other organisms. The results of these investigations showed that many traits indeed follow Mendel’s rules.

Hunt Morgan (1866 – 1945) discovered the first genetic mutant of fruit flies in 1910 and used fruit flies to unravel many details of transmission genetics.

Ronald A. Fisher (1890 – 1962), John B. S. Haldane (1892 – 1964), and Sewall Wright (1889 – 1988) laid the foundation for population genetics in the 1930s. Geneticists began to use bacteria and viruses in the 1940s; the rapid reproduction and simple genetic systems of these organisms allowed detailed study of the organization and structure of genes. At about this same time, evidence accumulated that DNA was the repository of genetic information.

James Watson and Francis Crick described the three-dimensional structure of DNA in 1953, ushering in the era of molecular genetics. By 1966, the chemical structure of DNA and the system by which it determines the amino acid sequence of proteins had been worked out.

Advances in molecular genetics led to the first recombinant DNA experiments in 1973, which touched off another revolution in genetic research. Walter Gilbert (b. 1932) and Frederick Sanger (b. 1918) developed methods for sequencing DNA in 1977.

The polymerase chain reaction, a technique for quickly amplifying tiny amounts of DNA, was developed by Kary Mullis (b. 1944) and others in 1986. In 1990, gene therapy was used for the first time to treat human genetic disease in the United States, and the Human Genome Project was launched. By 1995, the first complete DNA sequence of a free-living organism — the bacterium Haemophilus influenzae— was determined, and the first complete sequence of a eukaryotic organism (yeast) was reported a year later. At the beginning of the twenty-first century, the human genome sequence was determined, ushering in a new era in genetics.