Another issue with transgenic plants is the effect they may have on nontarget organisms , that is, any plants or animals inadvertently exposed to the transgenic crop or insecticide. An article in the journal Nature suggested that Monarch butterflies were killed by eating pollen from corn carrying the Bt gene. The study alarmed 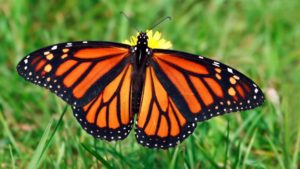 the science community as well as environmental advocacy groups.

Monarch caterpillars spend the summer in parts of Canada and the Midwest, feeding exclusively on milkweed plants. In the fall, the adult butterflies migrate to specific areas in Mexico. In the spring, the adults migrate back to the Midwest to lay eggs and repeat the cycle.

In this experiment, scientists at Cornell University dusted the leaves of milkweed plants with pollen from transgenic corn expressing the Bt toxin gene. This was compared to milkweed dusted with regular pollen and milkweed with no pollen. Caterpillars that ate the transgenic pollen had stunted growth, ate less, and died at a higher rate than the other two groups. 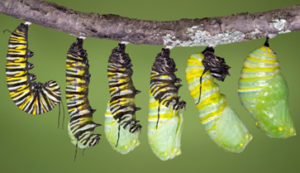 Much controversy surrounded this study. For example, it was never revealed how much pollen was actually put on the milkweed plants. The investigators simply put on as much pollen as they saw in cornfields. In addition, because caterpillars often refused to eat the Bt pollen– coated milkweed, some critics argued that a caterpillar would move to another milkweed plant in the natural environment.

Environmental groups found this a landmark study, showing that transgenic crops could be as damaging to the environment as pesticides such as DDT. But the best result of the controversy was a surge of research on transgenic Bt plants and their effects on butterflies and other nontarget organisms. 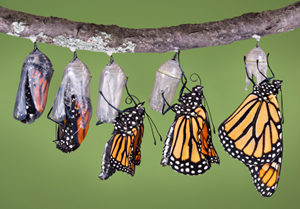 The amount of pollen in cornfields and on milkweed plants that surround cornfields was measured. It takes 100 pollen grains per square centimeter for Monarch caterpillars to be affected by Bt pollen. This level of pollen would be found only on milkweed directly surrounding or within a cornfield and would never occur in neighboring open areas. At a distance of 2 meters from the cornfield edge, the pollen density dropped to 14 grains per square centimeter.

In the natural environment, Monarch caterpillars simply do not eat these pollen-coated leaves, but move to a different part of the plant. In addition, rainfall or wind during pollen release greatly affects these numbers. One rainfall can remove more than half the pollen from the plants. Moreover, when given a choice, monarch butterflies lay their eggs on milkweed without pollen, further reducing the risk of harm. 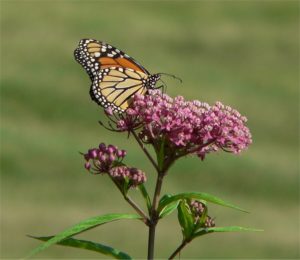 Studies were also done to determine which types of Bt toxins affect the larvae of Monarch butterflies. Only certain types of Bt toxins were actually harmful, whereas other types were harmless. The only pollen that was consistently toxic was Cry1Ab, event #176, which made up about 1% of the entire corn crop in 2000. In 2001, this transgene event was no longer approved and was no longer grown in the United States.

The Cry1Ab transgene of event #176 is under the control of a corn-pollen-specific promoter and a promoter from phosphoenolpyruvate carboxylase that ensures expression in all photosynthetic tissues. Other events that use the same toxin, Cry1Ab, were only toxic to Monarch caterpillars when at a density greater than 1000 pollen grains per square centimeter. The lower toxicity is due to use of different promoters. Other Cry toxins, Cry1F and Cry9C, showed no effect on any of the larval stages of the Monarch. These studies were done in a laboratory setting where the caterpillar had no choice but to eat milkweed contaminated with pollen.