The cell cycle is the life story of a cell, the stages through which it passes from one division to the next. 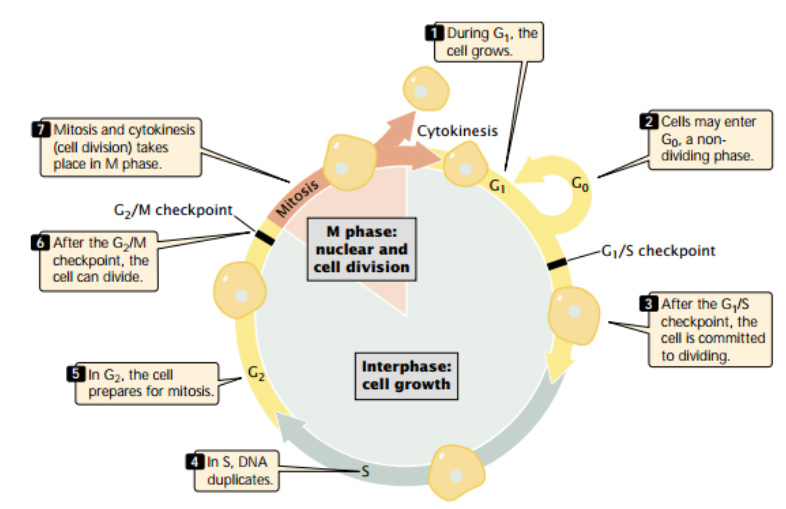 Fig: The cell cycle consists of interphase (a period of cell growth) and M phase (the
period of nuclear and cell division).

The cell cycle consists of interphase (a period of cell growth) and M phase (the period of nuclear and cell division).

The cell cycle consists of two major phases. The first is interphase, the period between cell divisions, in which the cell grows, develops, and prepares for cell division. The second is M phase (mitotic phase), the period of active cell division. M phase includes mitosis, the process of nuclear division, and cytokinesis, or cytoplasmic division. Let’s take a closer look at the details of interphase and M phase.

Before a cell can go through mitosis, or nuclear division that results in two genetically identical daughter cells, they must progress through interphase. During the period of interphase, a cell grows and creates proteins needed for division. There three stages in interphase occur in a particular order as part of the cell cycle; cells spend a majority of this cycle in interphase.

While prokaryotic cells, like bacteria, replicate through binary fission, eukaryotic cells divide through mitosis or meiosis. Only sexually-reproducing cells go through meiosis, but all eukaryotic cells use mitosis as a means of duplicating. Interphase is an integral part of the cell cycle that prepares a cell for mitosis by producing proteins and duplicating chromosomes. Interphase was once considered the “resting stage” of the cell cycle because microscopy could not detect movement in the cells. It is now known, however, that interphase is a period of great growth and essential preparation for mitosis.

Interphase begins with G1, which stands for “Gap 1.” During G1, cells grow and synthesize proteins needed for mitosis. These proteins also activate the cell’s metabolism and break down carbohydrates and lipids to transform this food into energy. Chromosomes inside the cell have not yet replicated in G1, so each chromosome contains only one DNA molecule.
Different organelles are synthesized by the cell.

S phase follows G1; its major function involves replicating the cell’s DNA. The “S” name stands for synthesis. By using enzymes, the cell copies the DNA molecules of each chromosome. After S phase completes, chromosomes have two chromatids, meaning each chromosome has two molecules of DNA. This stage is not distinctly visible through a microscope because material inside the cell is too diffuse.

After S phase, a cell enters G2, or “Gap 2,” and it involves another period of growth. The cell synthesizes more proteins, and organelles like mitochondria grow and divide. The cell also resumes normal functions like transforming food into fuel; cells stock up on this energy for its use in mitosis. G2 is the final step before a cell enters the first stage of mitosis.