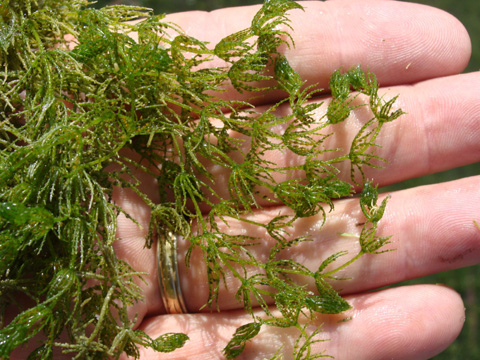 Chara often emits disagreeable onion like odour due to presence of sulphur compounds. C. hatei grows trailing on the soil C. nuda and C. grovesii are found on mountains, C. wallichii and C. liydropitys are found in plains.
The fossils of alga have been discovered from Paleozoic era. 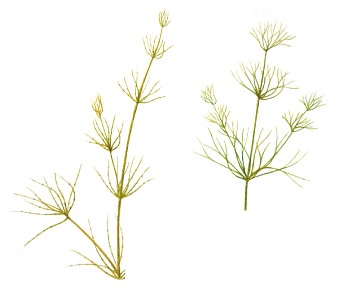 The thallus of Chara is branched, multicellular and macroscopic. The thallus is normally 20-30 cm. in height but often may be up to 90 cm to l m. Some species like C. hatei are small and may be 2-3 cm. long.
The plants in appearance resemble Equisetum hence Chara is commonly called as aquatic horsetail. The thallus is mainly differentiated into rhizoids and main axis.

The rhizoids are white, thread like, multicellular, uniseriate and branched structures. The rhizoids arise from rhizoidal plates which are formed at the base of main axis or from peripheral cells of lower nodes. The rhizoids are characterized by presence of oblique septa The tips of rhizoids possess minute solid particles which function as statoliths.

The rhizoids show apical growth. Rhizoids help in attachment of plant to substratum i.e., mud or sand, in absorption of minerals and in vegetative multiplication of plants by forming bulbils and secondary protonema. 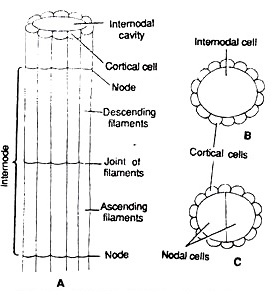 The main axis is erect, long, branched and differentiated into nodes and internodes.
The internode consists of single, much elongated or oblong cell.
The inter-nodal cells in some species may be surrounded by one celled thick layer called cortex and such species are called as corticate species.

The species in which cortical layer is absent are called ecorticate species.
The node consists of a pair of central small cells surrounded by 6-20 peripheral cells. The central cells and peripheral cells arise from a single nodal initial cell.

There are two types of branches in the Chara

(i) Branches of limited growth.

The basal node of the branches of limited growth develops short, oval, pointed single cell outgrowths called stipulodes. In most of the species of Chara e.g., C. burmanica, the number of stipulodes at each node is twice the number of primary laterals, such species are called as bi-stipulate.

If the inter-nodal cells of main axis en-sheathed by cortex cells. Such species are called corticated species.

The main axis of Chara consists of mainly two types of cells:

The nodal cells are smaller in size and isodiametric. The cells are dense cytoplasmic, uninucleate with few small ellipsoidal chloroplasts. The central vacuole is not developed instead many small vacuoles may be present. The cytoplasm can be differentiated in outer exoplasm and inner endoplasm (Fig. 5 A).

(i) Vegetative Reproduction in Chara:

The bulbils are spherical or oval tube-like structures which develop on rhizoids. C. aspora or on lower nodes of main axis e.g., C. baltica. The bulbils on detachment from plants germinate into new thallus (Fig. 6 A).

In some species of Chara e.g., C. stelligna, on the lower nodes of main axis develop multicellular star shape aggregates of cells (Fig. 6 B). These cells are full of amylum starch and hence are called Amylum stars. The amylum stars do detachment from plants develops into new Chara thalli.

The amorphous bulbils are group, many cells, irregular in shape which develop on lower node main axis e.g., C. delicatula or on rhizoids e.g., C. fragifera and C. baltica. The amorphous bulbils are perennating structures, when the main plant dies under unfavorable conditions; these bulbils survive and make Chara plants on return of favourable conditions.

The sexual reproduction in Chara is of highly advanced oogamous type. The sex organs are macroscopic and complex in organization.

The sex organs arise on the branches of limited growth or primary laterals, the nucule above the globule. The development of globule and nucule takes place simultaneously but species globule matures before nucule (Fig. 7 A, B).

The globule is large, spherical, red or yellow structure.

The middle basal node cell divides to make 5 peripheral cells. Out of these five peripheral cells, the upper one develops into oogonium, two lateral ones form unicellular bracteoles and two lower ones, one on either side of oogonium forms cortex or remains non-functional (Fig. 8 C, D).

All these four cells divide by a transverse wall to make eight cells or octant stage. Each cell of the octant divides periclinally and forms two layers of eight cells each.

At maturity the shield cells of antheridium separate from each other exposing antheridial filaments in water. The sperm mother cell gelatinizes to liberate the antherozoids.

The nucule of Chara is large, green, oval structure with short stalk. It is borne at the node of the primary lateral. It lies just above the globule in homothallic species.

The upper peripheral cell of the basal node of the antheridium functions as the oogonial initial. The oogonial initial divides by two transverse divisions to make three celled filament. It has lower pedical cell, the middle nodal cell and the upper oogonial mother cell (Fig. 10 A-C).

The five upper tier cells from coronary cells which form the corona of nucule. The five lower tier functions as tube cells, the tube cells elongate and get spirally twisted in clockwise directions on oogonium. The nucleus migrates on lower side and receptive spot develops at the tip of oogonium. Large amount of starch and oil get deposited in oogonium.

The mature nucule is attached to the node by the pedicel cell. The nucule is surrounded by five tube cells. The tips of tube cells from corona at the top of nucule. The oogonial cell possesses a single large egg or ovum. The nucule contains large amount of starch and oil. The receptive spot is present at the upper part of nucule.

When the oogonium is mature, the five tube cells get separated from each other forming narrow slits between them.

Antherozoids are chemotactically attracted towards ovum. The antherozoids enter through these slits and penetrate gelatinized wall of the oogonium. Many antherozoids enter oogonium but one of those fertilizes the egg to make a diploid zygote. The zygote secretes a thick wall around itself to make oospore.

The mature oospore is hard, oval, ellipsoid structure which may be brown e.g., C. inferma, black e.g., C. corallina or golden brown e.g., C. flauda. The oospore inside contains a diploid nucleus and many oil globules in cytoplasm.

On maturity of oospore the inner walls of tube cells get thickened, suberised and silicified. The oogonial as well as oospore walls become thick. The oospore nucleus moves towards the apical region. In advanced stage the outer walls of the envelope or sheath cells fall off and the inner parts remain attached to mature oospore in form of ridges.

The male and female sex organs are globule and nucule respectively. After fertilization a diploid spore is formed. At the time of germination diploid oospore nucleus divides to make hapoid nuclei and haploid Chara plant. Thus the life cycle of Chara a predominantly haploid type (Fig. 12, 13).