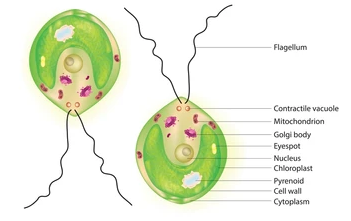 It is widely distributed unicellular algae. It is found in standing water of ponds, pools, ditches and on moist soil. A few members are present in sea.

It is a unicellular alga. Each cell is oval, spherical, oblong or pyriform (pear shape).

It is thin and occasionally possesses an outer thin mucilage sheath. It is cellulosic in nature and also contains hemicellulose and glycoproteins.

Two contractile vacuoles are present in each cell. Their main function is osmoregulation

A large cup-shaped chloroplast is present in cell. It contains matrix called stroma.

Pyrenoid: Pyrenoid consists of a central protein body surrounded by numerous minute starch grains. The number of pyrenoids is variable in different species. There may be two to any or no pyrenoid at all.

An orange-red pigment spot or eye-spot (stigma) is present near the origin of flagella. This is sensitive to light. Therefore, it directs the movement of the individual.

Nucleus: All species are uninucleate and nucleus is present in the centre of cytoplasm.

Both asexual and sexual reproductions takes place in Chlamydomonas. 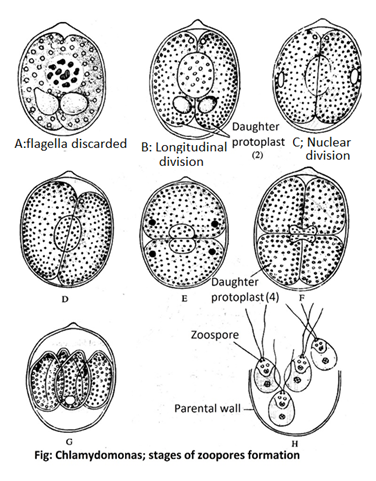 Zoospores are formed under favourable conditions.

Aplanospores are formed under dry conditions. Aplanospores germinate directly or divide to produce zoospores on the approach of favourable conditions.

These are red coloured due to the presence of a red pigment called the haematochrome.

At the time of sexual reproduction, the protoplast of a cell divides into 16, 32 or even 64 biflagellate gametes. The gametes may be naked called gymnogametes or they may be enclosed in a cell wall called calyptogametes.

The flagella disappear during fertilization. The quadriflagellate zygote may remain motile for more than

fifteen days. Then it secretes a wall and becomes zygospore.