Historical development  of the chromosome theory

The theory and practice of genetics took a major step forward in the early part of the twentieth century with the development of the notion that the genes, as identified by Mendel, are parts of specific cellular structures, the chromosomes. This simple concept has become known as the chromosome theory of heredity. Although simple, the idea has had enormous implications, providing a means of correlating the results of breeding experiments such as Mendel’s with the behavior of structures that can be seen under the microscope. This fusion between genetics and cytology is still an essential part of genetic analysis today and has important applications in medical genetics, agricultural genetics, and evolutionary genetics.

How did the chromosome theory take shape?

Evidence  accumulated from a variety of sources. One of the first lines of evidence came from observations of how chromosomes behave during the division of a cell’s nucleus.

Mendel’s results lay unnoticed in the scientific literature until 1900, when they were repeated independently by other researchers. In the late 1800s, biologists  were keenly interested in heredity, even though they  were unaware of Mendel’s work.

One key issue of that  era was the location of the hereditary material in the  cell.

An obvious place to look was in the gametes, because they are the only connecting link between generations. Egg and sperm were believed to contribute equally  to the genetic endowment of offspring, even though  they differ greatly in size. Because an egg has a great volume of cytoplasm and a sperm has very little, the cytoplasm of gametes seemed an unlikely seat of the hereditary structures. The nuclei of egg and sperm, however, were known to be approximately equal in size, so the nuclei were considered good candidates for harboring hereditary material.

What was known about the contents of cell nuclei?

It became clear that their most prominent components were the chromosomes. Between cell divisions, the contents of nuclei appear densely packed and difficult to resolve into shapes. During cell division, however, the nuclear chromosomes appear as worm–shaped structures easily visible under the microscope. Chromosomes proved to possess unique properties that set them apart  from all other cellular structures. A property that especially intrigued biologists was that the number of chromosomes is constant from cell to cell within an organism, from organism to organism within any one species, and from generation to generation within that species.

How is the chromosome number maintained? The question was first answered by

observing under the microscope the orderly behavior of chromosomes during mitosis, the nuclear division that accompanies simple cell division. These studies showed the way by which chromosome number is maintained from cell to cell.

Similarities between chromosome behavior and that of genes gave rise to the idea that chromosomes are the structures that contain the genes.

Credit for the chromosome theory of heredity—the concept that genes are parts of chromosomes—is usually given to Walter Sutton (an American who at the time was a graduate student) and Theodor Boveri (a German biologist). Working this time with meiosis, in 1902 these investigators recognized independently that the behavior of Mendel’s hypothetical particles during the production of gametes in peas precisely parallels the behavior of chromosomes at meiosis.

Both investigators reached the same conclusion, which was that the

parallel behavior of genes and chromosomes strongly suggests that genes are located on chromosomes.

It is worth considering some of the objections raised to the Sutton-Boveri theory. For example, (i) at the time, chromosomes could not be detected in interphase (the stage between cell divisions).

Boveri had to make some very detailed studies of chromosome position before and after interphase before he could argue persuasively that chromosomes retain their physical integrity through interphase, even though they are cytologically invisible at that time.

It was also pointed out that, in some organisms, several different pairs of chromosomes look alike, making it impossible to say from visual observation that they are not all pairing randomly, whereas Mendel’s laws absolutely require the orderly pairing and segregation of alleles. However, in species in which chromosomes do differ in size and shape, it was verified that chromosomes come in pairs and that these two homologous chromosomes physically pair and segregate in meiosis.

In 1913, Elinor Carothers found an unusual chromosomal situation in a certain species of grasshopper a situation that permitted a direct test of whether different chromosome pairs do indeed segregate independently. Studying grasshopper testes, she made use of a highly unusual situation to make deductions about the usual, an approach that has become standard in genetic analysis.

Other investigators argued that, because all chromosomes appear as stringy structures, qualitative differences between them are of no significance. It was suggested that perhaps all chromosomes were just more or less made of the same stuff. It is worth introducing a Random assortment demonstrated at meiosis. Two equally frequent patterns by which a heteromorphic pair and an unpaired chromosome move into gametes, as observed by Carothers.

Figure Random assortment demonstrated at meiosis. Two equally frequent patterns by which a heteromorphic pair and an unpaired chromosome move into gametes, as observed by Carothers.

In 1922, Alfred Blakeslee performed a

study on the chromosomes of jimsonweed (Datura stramonium), which has 12 chromosome pairs. He obtained 12 different strains, each of which had the normal 12 chromosome pairs plus an extra representative of one pair. Blakeslee showed that each strain was phenotypically distinct from the others. This result would not be expected if there were no genetic differences between the chromosomes.

All these results pointed indirectly to the chromosomes as the location of genes. The Sutton-Boveri theory was attractive, but there was as yet no direct evidence that genes are located on chromosomes. The argument was based simply on correlation. Further observations, however, did provide the desired evidence, and they began with the discovery of sex linkage.

Most of the early crosses analyzed gave the same results in reciprocal crosses, as shown by Mendel. The first exception to this pattern was discovered in 1906 by L. Doncaster and G. H. Raynor. They were studying wing color in the magpie moth (Abraxas) by using two different lines, one with light wings and the other with dark wings. They made the following reciprocal crosses:

All the female progeny have light wings

All the male progeny have dark wings

Hence, this pair of reciprocal crosses does not give similar results, and the wing phenotypes in the second cross are associated with the sex of the moths. Note that the female progeny of this second cross are phenotypically similar to their fathers, as the males are to their mothers.

Later William Bateson found that in chickens the inheritance pattern of a feather phenotype called barred was exactly the same as that of dark wing colour in Abraxas.

The explanation for such results came from the laboratory of Thomas Hunt Morgan, who in 1909

began studying inheritance in a fruit fly (Drosophila melanogaster). The choice of Drosophila as a research organism was a very fortunate one for geneticists and especially for Morgan, whose work earned him a Nobel prize in 1934.

The normal eye color of Drosophila is dull red. Early in his studies, Morgan discovered a male with

completely white eyes. He found that reciprocal crosses gave  different results and that phenotypic ratios differed by  sex of progeny,

Self cross of F1

But white eyed were males

In this context, Morgan constructed interpretation of his genetic data. First, it appeared that the X and

Morgan then turned to the problem of eye color. He postulated that the alleles for red or white eye

color are present on the X chromosome but that there is no counterpart for this gene on the Y chromosome. Thus, females would have two alleles for this gene, whereas males would have only one. The genetic results were completely consistent with the known meiotic behavior of the X and Y chromosomes. This experiment strongly supports the notion that genes are located on chromosomes. However, again it is only a correlation; it does not provide direct support for the Sutton-Boveri theory.

chickens and moths? You will find that it cannot. However, Richard Goldschmidt realized that these results can be explained with a similar hypothesis, if one makes the simple assumption that in these cases it is the males that have pairs of identical chromosomes, and the females that have the different pair. To distinguish this situation from the XY situation in Drosophila, Morgan suggested that the sex chromosomes in chickens and moths be called W and Z, with males being ZZ and females being ZW. Thus, if the genes in the chicken and moth crosses are on the Z chromosome. The interpretation is consistent with the genetic data. In this case, cytological data provided a confirmation of the genetic hypothesis.

In 1914, J. Seiler verified that both chromosomes are identical in all pairs in male moths, whereas females have one different pair.

The critical analysis that firmly established the chromosome theory of heredity came from one of Morgan’s students, Calvin Bridges. He was able to predict that, if genes are located on chromosomes, certain unusual and unexpected genetic results should be explained by the occurrence of abnormal chromosome arrangements.

He subsequently observed the abnormal chromosomes under the microscope, exactly as he had predicted. Bridges’s work began with a fruit fly cross that we have considered before:

However, when Bridges made the cross on a large scale, he observed a few exceptions among the

Similarly, exceptional males must get their X chromosomes from their fathers because these chromosomes carry w+.

Bridges hypothesized rare mishaps in the course of meiosis in the female whereby the paired X chromosomes failed to separate in either the first or the second division. This failure would result in meiotic nuclei containing either two X chromosomes or no X at all. Such a failure to separate is called nondisjunction. Fertilization of an egg having this type of nucleus by sperm from a wild-type male produces four zygotic classes-XXX, XXY, XO, and YO.

complete, so the two types of viable exceptional progeny are expected to be XwXwY (white-eyed female) and Xw+ О (red-eyed sterile male). What about the sterility of the primary exceptional males? This sterility makes sense if we assume that a male must have a Y chromosome to be fertile.

To summarize, Bridges explained the primary exceptional progeny by postulating rare abnormal meioses that gave rise to viable XXY females and XO males. To test this model, he examined microscopically the chromosomes of the primary exceptional progeny, and indeed they were of the type that he had predicted, XXY and XO. Therefore, by assuming that the eye-color gene was located on the chromosomes, Bridges was able to accurately predict several unusual chromosome rearrangements as well as a previously unknown genetic process, nondisjunction. 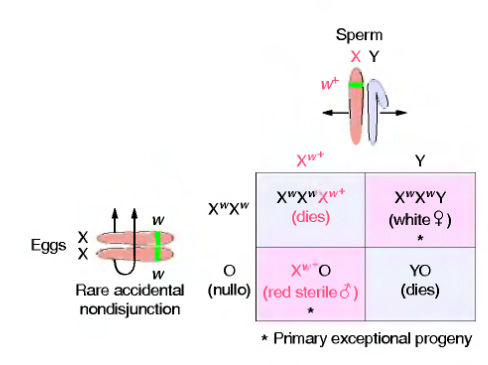