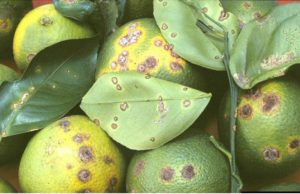 Citrus canker is one of the most feared of citrus diseases, affecting all types of important citrus crops. The disease causes extensive damage to citrus and severity of this infection varies with different species and varieties and the prevailing climatic conditions.

Citrus canker presently occurs in over thirty countries in Asia, the Pacific and Indian Ocean islands, South America, and the South eastern USA. When citrus infection occurs in the early growing stage, the fruits crack or become malformed as they grow, and the heavily infected ones fall prematurely. Light infection in later growth stages may cause only scattered canker lesions on the surface of fruits but makes fresh fruits unacceptable for market. The severity of fruit infection usually parallels that of foliage infection. Eighty to ninety percent of fruit infection is not uncommon in susceptible citrus trees that have already sustained severe foliage infection. Such heavy foliage infection often causes severe defoliation, leaving only bare twigs. 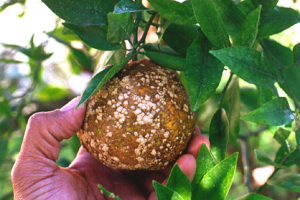 The diseased plants are characterized by the occurrence of conspicuous raised necrotic lesions that develop on leaves, twigs and fruits. Lesions can be detected by drawing the fingers over the surface of infected tissues. On leaves, first appearance is as oily looking, 2-10 mm circular spots, usually on the abaxial surface (reflecting stomatal entry following rain dispersal). Lesions are often similarly sized. Later, both epidermal surfaces may become ruptured by tissue hyperplasia induced by the pathogen. On leaves, stems, thorns and fruit, circular lesions become raised and blister-like, growing into white or yellow spongy pustules. These pustules then darken and thicken into a light tan to brown corky canker, which is rough to the touch. Often a water-soaked margin develops around the necrotic tissue and is easily viewed with transmitted light.  Older lesions on leaves and fruit tend to have more elevated margins and are at times surrounded by a yellow chlorotic halo (that may disappear as canker lesions age) and a sunken center. Sunken centers are especially noticeable on fruits, but the lesions do not penetrate far into the rind thereby not affecting internal quality. Severe infection results in defoliation, die-back, deformation of fruit and premature fruit drop. Canker causes fruit losses ranging from premature fruit drop due to abscission to non marketable quality due to lesions. Disease of the fruit is probably the most economically important damage since fruits with canker lesion are not acceptable for fresh market and fetch very little price. An essential diagnostic symptom of the disease is citrus tissue hyperplasia (excessive mitotic cell divisions),resulting in cankers. 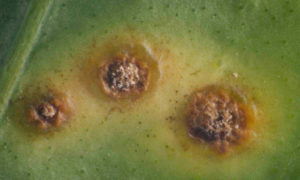 Among commercial citrus varieties and rootstocks, Asiatic citrus canker is most severe on grapefruit (C. paradisi), limes (C. aurantifolia, C. limettioides), trifoliate orange (Poncirus trifoliata) and their hybrids because of their high susceptibility.

Based on currently available information, at least three pathovars (sometimes called strains) of Xanthomonas axonopodis have been recognized. These pathogens are distinguished from one another by geographical distribution and by different pathogenicity to members of genus Citrus.The pathogen for canker A was first identified and described as Pseudomonas citri.

The bacterium (Xac) is rod-shaped. Gram-negative, and has a single polar flagellum. Growth is obligately aerobic. Colonies on culture media are usually yellow as a result of xanthomonadin pigment production. When glucose or other sugars are added to the culture medium, colonies become very mucoid due to the production of an extracellular polysaccharide slime. The optimum temperature range for growth is 28 to30°C(82 to86 0F), and the maximum temperature range for growth is 35 to 390C(95 to 1020F). Bacterial cells are positive for hydrolysis of starch, aesculin, casein, liquefaction of gelatin, and production of tyrosinase, catalase, reducing substance from sucrose, and hydrogen sulfide.

Xac survives primarily in naturally occurring lesions. Cankerousleaves, twigs and branches constitute the main source ofinoculum. Since affected leaves drop early, they may not serve as the main source of inoculum but  bacterium survives upto 6 months in the infected leaves. The disease is carried from season to season mainly in the cankers on twigs and branches. The pathogen can survive in diseased twigs upto 76 months.

The bacterium also survives epiphytically at lower population levels on citrus hosts without symptom development, in association with non-citrus weed and grass hosts and also in soil.

Bacterial cells ooze from existing lesions during wet weather to provide inoculum for further disease development. Infection by Xac occurs, like many other bacterial diseases, primarily through stomata, and wounds produced during strong winds and by insects. Resistance of leaves, stems and fruits generally increases with tissue maturation. The period of susceptibility to wound infection may be longer than that for stomatal infection, depending on the cultivar. Lesion development and bacterial multiplication maybe directly related to host resistance.  Presence of free moisture on the host surface for 20 min. is essential for successful infection. Leaves, stems, and fruit become resistant to infection as they mature. Almost all infections occur on leaves and stems within the first 6 weeks after initiation of growth.

Since Xanthomonads have mucilaginous coat, they easily suspend in water and are dispersed in droplets. Spread of canker bacteria by wind and rain is mostly over short distances, i.e., within trees or to neighbouring trees. Cankers develop more severely on the side of the tree exposed to wind-driven rain.
There is no record of seed transmission.
Nursery workers can carry bacteria from one nursery to another on hands, clothes, and equipment. Similarly,spread can also result from movement of contaminated bud wood or contaminated budding equipment

Pruning, hedging, and spray equipment have been demonstrated to spread the bacteria within and among plantings.

Wooden harvesting boxes that contained diseased fruit and leaves have also been implicated in long-distance spread.

Temperature between 200  to 300C with evenly distributed rains are most suitable for the disease.

Commercially acceptable management of canker, especially on susceptible cultivars under favourable disease development conditions, is generally difficult. The most effective management of canker is by supplementing the use of resistant cultivars with integrated systems of compatible cultural practices and phytosanitary measures.

The basic strategies of the specific methods are to avoid, exclude, or eradicate the pathogen, to reduce the amount of inoculum available for infection, to minimize dissemination of the pathogen, and to protect susceptible tissue from infection.

But under endemic condition such an eradication measure is considered not feasible. Hence effective control of this disease depends on the continuous care and attention paid by the grower. Canker incidence under these conditions can be reduced considerably by taking integrated management approach consisting of

(i) using canker-free nursery stock,
(ii) Pruning all the infected twigs before monsoon and burning them,
(iii)periodical spraying of suitable copper-based bactericides (to reduce inoculum build-up on new flushes and to protect expanding fruit surfaces from infection) along with an insecticide (to control insect injury),
(iv) taking some precautions to reduce the risk of spread of disease in orchards and nurseries and
(v) by spraying the some antibiotics such as streptomycin, streptocycline in combination with Bordeaux mixture.