In many ascomycetes, studies of the fine structure of asci

during cleavage of the ascospores have shown that a system of double membranes continuous with the endoplasmic reticulum extends from the envelope of the diploid fusion nucleus.

The double membrane develops to form a cylindrical envelope lining the young ascus.

This peripheral membrane cylinder or lining layer is termed the ascus vesicle or ascospore-delimiting membrane.

The ascospores are cut out from the cytoplasm within the ascus by infolding and fusion of the inner edges of the double membrane around a portion of cytoplasm and a nucleus.

In some ascomycetes, e.g. Taphrina, a peripheral membrane cylinder has not been observed and the nuclei within the ascus become enveloped by ascospore-delimiting membranes formed by direct invagination of discrete parts of the ascus plasma membrane.

Between the two layers of the ascospore delimiting membrane enclosing the ascospores, the primary spore wall is secreted.

The inner membrane forms the plasma membrane of the ascospore and the outer membrane becomes the spore-investing membrane.

Secondary wall material is secreted within the primary wall. There may be several such layers. In Sordaria humana a total of four spore wall layers have been distinguished, a primary wall layer and three secondary layers.

The spore wall may be smooth or extended to form a variety of ornamentations such as spines, ridges or reticulations.

The ascus epiplasm, i.e. the residual cytoplasm remaining outside the spores after these have become cleaved out, may continue to play a part in the formation of the ascospore wall.

This secondary wall material ornaments the ascospore wall but is not involved in the formation of the purple pigment characteristic of Ascobolus ascospores. In many ascomycetes the outermost layer of the ascospore wall, the perispore, is mucilaginous, as seen for example in Ascobolus immersus.

The properties of this outer wall layer may aid in the lubrication of the spore and also enable it to be compressed as it emerges from the ascus. Further, it may aid in the attachment of ascospores to substrata.

It may also cause ascospores to stick together to form multisporous projectiles, an adaptation which results in an increased distance of ascospore discharge as compared with singlespored projectiles.

Germ pores or germ slits, through which germ tubes emerge on spore germination, are found in many ascomycetes, especially those with thick dark-pigmented walls.

Germ pores, representing thin areas in the spore wall, occur at each end of the spore in Neurospora and germination may occur at either or at both ends. In Sordaria humana there is a single germ pore at the lower end of the ascospore plugged by a pore plug. 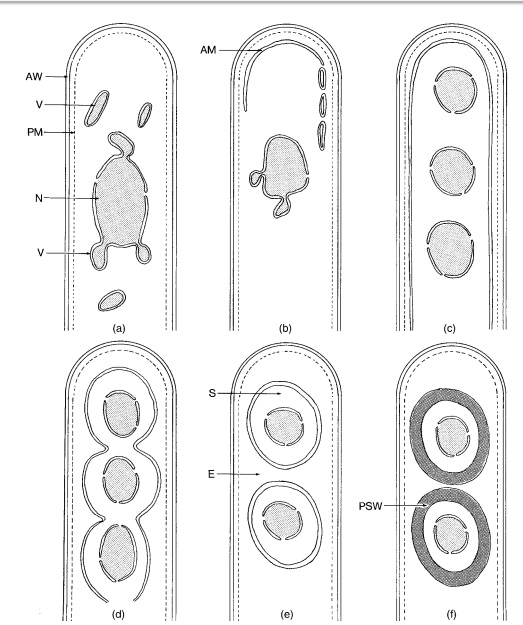