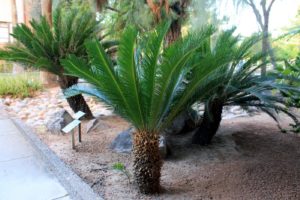 Cycas has a limited distribution. It is found in south East Asia, South China, Southren India, South Japan and Australia. The plants grow under xerophytic conditions. Cycas is also cultivated as an ornamental plant in the gardens and parks. Cycas plants live upto hundred years or more. Cycas is called a living fossil.

The plant body is a sporophyte. It is differentiated into root, stem and leaves. 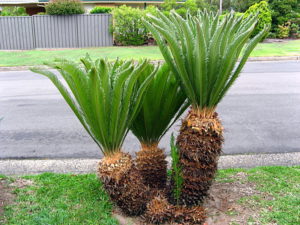 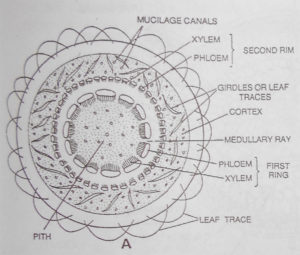 Fig: T.S of Stem of cycas 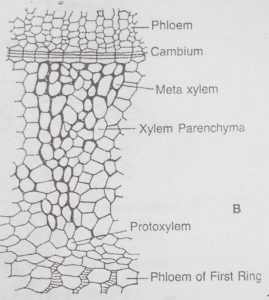 Internal Structure of the Leaf

Each pinna of leaf has typical bifacial structure in transverse section.

Fig A: TS of leaf of Cycas 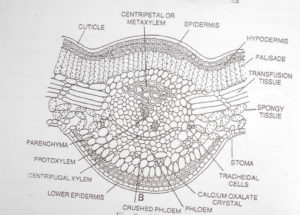 Fig B: T.S of leaf of Cycas

The structure is similar to that of primary root. In addition there is a conspicuous broad blue green zone in middle cortex. This is the algal zone. It lies midway between the vascular bundle and epiblemma. The cortical cells in this region get disorganized and are inhibited by blue green algae such as Nostoc and Anabaena.

In coralloid root the cortex is divided into three zones;Outer cortex, Middle cortex and Inner cortex.

The stele is diarch, triarch or tetrarch and surrounded by an endodermis which is followed by pericycle.

Cycas is dioecious. The male and female plants are separate. Sometimes, Cycas plants also reproduce vegetatively. It produces buds on the stem. These buds grow to form new plant. 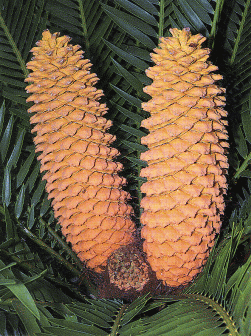 Development of the sporangium

The female cones are produced on the female plants. Female cones of Cycas are very large. It is formed of megasporophylls.
Megasporophylls are loosely arranged to form crowns.
Each megasporophyll is leaf like in form.
The upper portion of the sporophyll is pinnate.
Ovules (megasporangium) are arranged in two rows in the basal half of the sporophyll.
The whole sporophyll and young ovules are covered by a dense mat of hairs.
The ovules loose this hairy covering on maturity.
Each ovule is covered by a single massive integument. It has a narrow micropyle at the tip. Integument projects around the micropyle to form a small beak. Nucellus projects into the micropyle. But later the nucellar cells in this region disorganize to form a small cavity called pollen chamber. It plays an important part in early stages of fertilization. One of the nucellar cells increases in size and becomes megaspore mother cell. It undergoes meiosis to form four megaspores. Three megaspores degenerate. Only one becomes functional megaspore.

The pollen grain resumes its development after pollination.

Development of Embryo and Seed

Oospore divides into 200-300 cells. The cells of the central region disorganize to produce a cavity. This cavity is surrounded by two to three layers of cells. The cells in the lower region elongate very much to form suspensor. The cells at the tip of the suspensor develop into the embryo. The elongating suspensor pushes the developing embryo deep into the prothalial tissue. These tissues provide nutrition to the developing embryo. Whole of the nucellus is consumed during the development of the embryo. Some prothalial tissue persists in the seed and form endosperm. A thick pad of tissue develops near the micropylar end. It functions as coleorhiza. Coleorhiza protects the radical of the embryo. Ovule is transformed into the seed. Embryo has two cotyledons. They occupy the whole seed. The seeds germinate immediately. Cotyledons remain within the seed on germination. It .absorbs nutrients for the developing embryo