About one in 2000 white children suffer from cystic fibrosis . This condition is due to homozygous recessive mutations. In other words two defective copies of the gene, one from each parent, must be inherited for the child to suffer from the disease. Humans with a single defective allele are carriers but do not show symptoms, as a single wild-type version of the gene is sufficient for normal health.

The protein encoded by the cystic fibrosis gene is referred to as the CFTR protein (for cystic fibrosis transporter) and is found in the cell membrane where it acts as a channel for chloride ions. In healthy people, this channel can be opened or shut as needed by the cell. The CFTR protein consists of a series of membrane-spanning segments with a central control module.   If the control module has a phosphate group attached, the channel is open, and when the phosphate group is removed, it shuts.

In cystic fibrosis patients, control of the chloride channel is defective. This, in turn, affects a variety of other processes. The most harmful is that the mucus that lines and protects the lungs is abnormally thick.
Lack of chloride ions leads to lack of sufficient water accompanying the mucus. This not only causes obstructions but also allows the growth of harmful microorganisms.
Cells lining the airways of the lungs are killed and replaced with fibrous scar tissue—hence the name of the disease. Eventually the patient succumbs to respiratory failure. 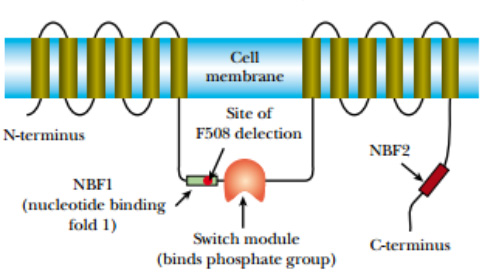 FIGURE: Cystic Fibrosis Protein Transports Chloride
The CFTR protein has 12 hydrophobic segments that span the
cell membrane. Small loops connect the 12 transmembrane segments,
except for segments 6 and 7, which are linked by a large protein loop. In the
three-dimensional configuration the 12 transmembrane segments
organize to form a channel, and the large protein loop regulates
whether the channel is open or shut.

The general location of the cystic fibrosis gene (to within 2 million base pairs) was found by screening large numbers of genetic markers (RFLPs) in members of families with a cystic fibrosis patient.

The gene was found on the longer (q) arm of chromosome 7 between bands q21 and q31. After subcloning this region of the chromosome in large segments, the cystic fibrosis gene was found to occupy 250,000 base pairs and have 24 exons, encoding a protein of 1480 amino acids.
Because 1480 amino acids need only 4440 base pairs to encode them, this means that scarcely 2% of the cystic fibrosis gene is actually coding DNA. The rest consists of introns.

About 70% of the cystic fibrosis victims in North America share the same genetic defect. They all have a small deletion of three bases that code for the amino acid phenylalanine at position 508 of the normal protein. 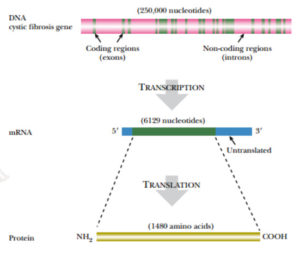 FIGURE:Cystic Fibrosis Gene
The cystic fibrosis gene covers an extremely large region of DNA (250,000 nucleotides) and has 24 exons. After transcription
and splicing, the mRNA is only 6129 nucleotides; thus the majority of the
gene consists of introns.

In Denmark, 90% of cystic fibrosis cases are due to this ΔF508 deletion (F = phenylalanine in single-letter code), whereas in the Middle East it accounts for only 30%. The other cystic fibrosis cases are the result of more than 500 different mutations, which makes genetic screening difficult. The distribution and relatively high frequency of the ΔF508 deletion suggest that it originated in Western Europe, perhaps around 2000 years ago, and has been positively selected.

Although two defective copies of the CFTR gene are highly detrimental, heterozygotes with one ΔF508 allele and one normal allele show only moderate reduction of ion flow and water movement. This does not cause cystic fibrosis but is sufficient to significantly reduce the loss of fluids during diarrhea. Such heterozygotes are more resistant to the effects of enteric infections such as typhoid and cholera that cause dehydration via extensive diarrhea.

In some instances the healthy cystic fibrosis gene was expressed and normal chloride ion movements were also restored.

Unfortunately, expression falls off over a 30-day period and repeated doses of virus have little effect, largely because of recognition and destruction of the virus by the immune system. It is hoped that in the near future, improved vectors will allow cystic fibrosis to be cured by nasal sprays containing genetically engineered viruses. Note, however, that this sort of gene therapy cures only the symptoms in the lungs; it does not correct the genetic defect in the germline cells. The defect will still be passed on to the next generation.