Before we see how Watson and Crick solved the structure of DNA, let’s review what was known about genes and DNA at the time that they began their historic collaboration:

postulated that genes control the structure of proteins.

3. Genes were known to be carried on chromosomes.

4. The chromosomes were found to consist of DNA and protein.

Frederick Grifﬁth made a puzzling observation in the course of experiments on the bacterium Streptococcus pneumoniae performed in 1928.

This bacterium, which causes pneumonia in humans, is normally lethal in mice. However, some strains of this bacterial species have evolved to be less virulent (less able to cause disease or death).  In these experiments, Grifﬁth used two strains that are distinguishable by the appearance of their colonies when grown in laboratory cultures.

He then injected the heat-killed cells into mice. The mice survived, showing that the carcasses of the cells do not cause death. However, mice injected with a mixture of heat-killed virulent cells and live nonvirulent cells did die. Furthermore, live cells could be recovered from the dead mice; these cells gave smooth colonies and were virulent on subsequent injection. Somehow, the cell debris of the boiled S cells had converted the live R cells into live S cells. The process, already discussed in Chapter 5, is called transformation. 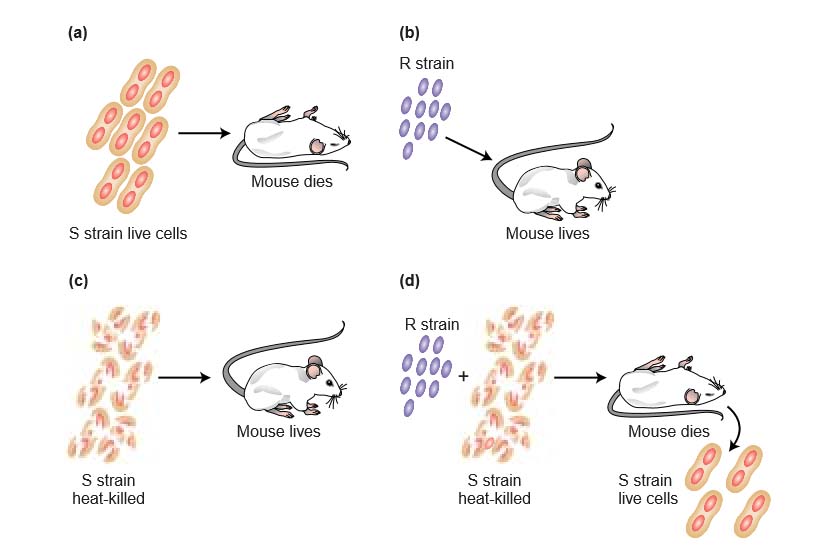 The next step was to determine which chemical component of the dead donor cells had caused this transformation. This substance had changed the genotype of the recipient strain and therefore might be a candidate for the hereditary material.

This problem was solved by experiments conducted in 1944 by Oswald Avery and two colleagues, C. M. MacLeod and M. McCarty . Their approach to the problem was to chemically destroy all the major categories of chemicals in the extract of dead cells one at a time and ﬁnd out if the extract had lost the ability to transform.The virulent cells had a smooth polysaccharide coat, whereas the nonvirulent cells did not; hence, polysaccharides were an obvious candidate for the transforming agent. However, when polysaccharides were destroyed, the mixture could still transform. Proteins, fats, and ribonucleic acids (RNA) were all similarly shown not to be the transforming agent.

The mixture lost its transforming ability only when the donor mixture was treated with the enzyme deoxyribonuclease (DNase), which breaks up DNA. These results strongly implicate DNA as the genetic material. It is now known that fragments of the transforming DNA that confer virulence enter the bacterial chromosome and replace their counterparts that confer nonvirulence. 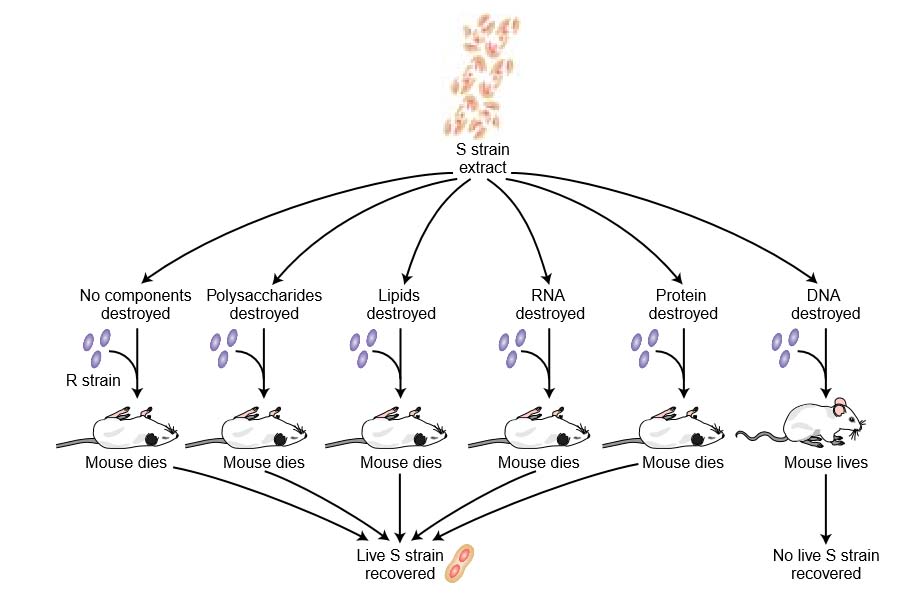 Fig: DNA is the agent transforming the R strain into virulence. If the DNA in an extract of heat-killed S strain cells is destroyed, then mice injected with a mixture of the heat-killed cells and the live nonvirulent strain R are no longer killed.

The experiments conducted by Avery and his colleagues were deﬁnitive, but many scientists were very reluctant to accept DNA (rather than proteins) as the genetic material. Additional evidence was provided in 1952 by Alfred Hershey and Martha Chase. Their experiment made use of phage T2, a virus that infects bacteria. They reasoned that infecting phage must inject into the bacterium the speciﬁc information that dictates the reproduction of new viral particles. If they could ﬁnd out what material the phage was injecting into the phage host, they would have determined the genetic material of phage.

The phage is relatively simple in molecular constitution. Most of its structure is protein, with DNA contained inside the protein sheath of its “head.”

Hershey and Chase decided to label the DNA and protein by using radioisotopes so that they could track the two materials during infection. Phosphorus is not found in proteins but is an integral part of DNA; conversely, sulfur is present in proteins but never in DNA. Hershey and Chase incorporated the radioisotope of phosphorus (32P) into phage DNA and that of sulfur (35S) into the proteins of a separate phage culture. 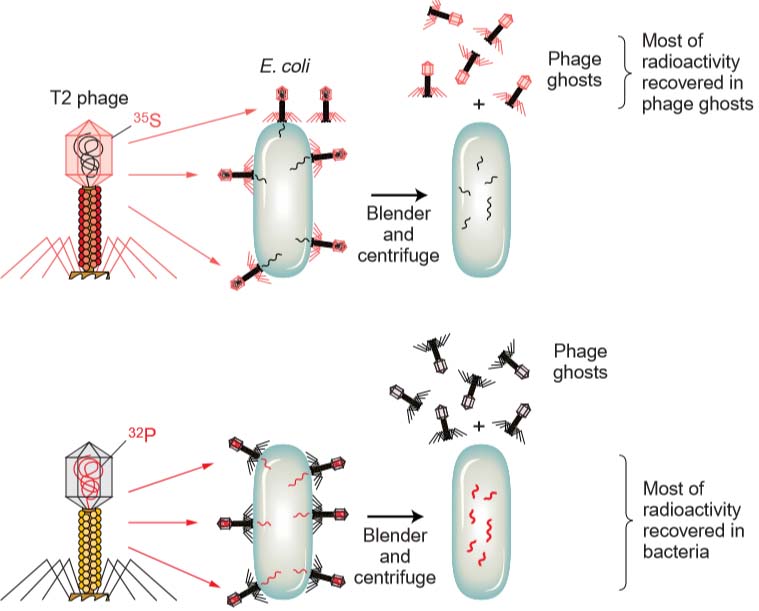 Fig: The Hershey–Chase experiment demonstrated that the genetic material of phage is DNA, not protein. The experiment uses two sets of T2 bacteriophage. In one set, the protein coat is labeled with radioactive sulfur (35S), not found in DNA. In the other set, the DNA is labeled with radioactive phosphorus (32P), not found in protein. Only the 32P is injected into the E. coli, indicating that DNA is the agent necessary for the production of new phage.