The transverse septa which divide both monokaryotic and dikaryotic hyphae into segments are incomplete; they contain a central pore which permits cytoplasmic continuity between adjacent segments. The septal pore is surrounded by a barrel-shaped flange of thickened wall material. Such septa, which are characteristic of basidiomycete mycelia, are known as dolipore septa (Lat. dolium= large jar, cask).  Septal development begins by centripetal ingrowth of a membrane on which wall material (glucan and chitin) is deposited at both faces from associated vesicles. The thickening surrounding the pore results from more rapid deposition of wall material, but there is evidence that very thick pore rims may be an artefact associated with chemical fixation. 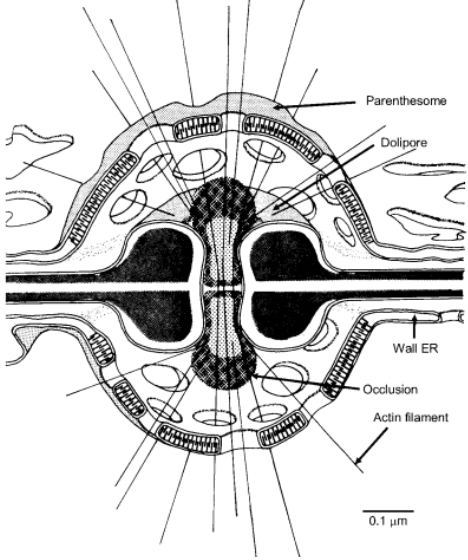 The pore itself may be blocked by an occlusion shaped like two champagne corks attached end to end, but blockage of the pore is not a permanent feature. In some cases there is a transverse central plate in the pore canal. Overarching the septal pore on each side of the septum is a specialized portion of endoplasmic reticulum known as the septal pore cap or parenthesome (parenthesis =round bracket, Gr. soma= body).

In some cases a second parenthesome (outer cap) has been reported. In many basidiomycetes with holobasidia (i.e. Homobasidiomycetes), the parenthesomes are perforated (fenestrated), but in many Heterobasidiomycetes, e.g. Auricularia, there is only a single perforation or none. Other variations in ultrastructure are known and can be characteristic of different groups of basidiomycetes, so that the dolipore/parenthesome complex is considered to be of taxonomic significance.

An important role of the dolipore/parenthesome complex is to secure the integrity of hyphal cells and to maintain intercellular communication and transport of some organelles. A variety of cytoplasmic structures has been reported from within the pores of Rhizoctonia solani. These include small tubular and filamentous structures, small vesicles, tubular endoplasmic reticulum and other plugging material. The movement of mitochondria through the septal pore cap has also been documented.

Whilst the movement of most organelles through the septal pore is permitted, the passage of nuclei is not, and this is possibly a consequence of their larger size. The migration of nuclei following plasmogamy between two sexually compatible monokaryotic mycelia is associated with enzymatic dissolution of the dolipore.

Another important function of dolipores is the repair of hyphal damage, the septal pore being rapidly plugged by electrondense material in the compartment of a hypha.