Ectocarpus is a brown alga. It is abundantly found throughout the world in cold waters.
A few species occur in fresh waters.
The plant grows attached to rocks and stones along coasts.
Some species are epiphytes on other algae like members of Fucales and Laminaria.
Ectocarpus fasciculatus grows on the fins of certain fish in Sweden.
Ectecarpus dermonemcnis is endophytic.
Ectocarpus carver and Ectocarpus spongiosus are free- floating. 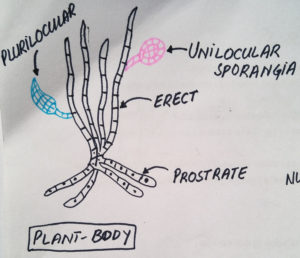 The prostrate system consists of creeping, septate, irregularly branched filaments.
These filaments are attached to the substratum with the help of rhizoids.
This system penetrates the host tissues in epiphytic conditions.
Prostrate system is poorly developed in free floating species.

The projecting system arises from the prostrate system.
It consists of well branched filaments.
Each branch arises beneath the septa.
The main axis and the branches of the projecting system are uniseriate.
In this case, cells are joined end to end in a single series.
The branches terminate into an acute point to form a hair.
In some species the older portions of main axis are ensheathed (corticated).
This sheath is formed of a layer of descending rhizoidal branches. 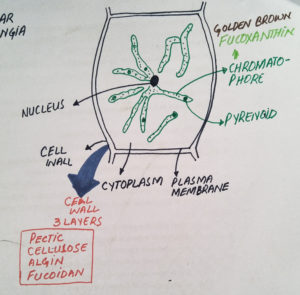 The cells are small. They are cylindrical or rectangular and uninucleate.

The growth in the prostrate system is apical

Ectocarpus reproduces by both asexual and sexual methods. 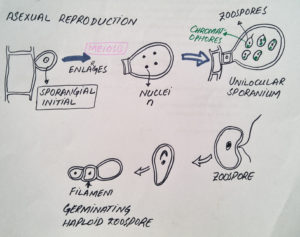 A unilocular sporangium develops from a terminal cell of a short lateral branch. 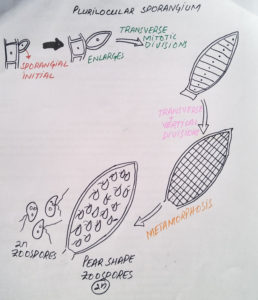 The plurilocular sporangia are stalked or sessile.
These are elongated, cone-like multicellular structures.
These also develop from a terminal cell of a short lateral branch.

The zoospores formed in unilocular sporangia (meioszoospores) swarm for sometime.
They then come to rest on some solid object.
They withdraw their flagella and secrete a membrane around then.
They germinate and form a small germ tube.
This tube is separated prom the meiozoospore cell through a septum.
This germ tube divides and redivides. It forms the prostrate system of plant.
The projecting system arises from the filaments of the prostrate system.
The new plant form is haploid. Therefore, it is gametophyte. The meiozoospores develop into a gametophytic plant. Therefore, these spores are also called as gonozoospores.

Sexual reproduction takes place by isogamy or anisogamy.
Majority of the species are isogamous and homothallic.
Some species are anisogamous.
Ectocarpus secundus is heterothallic and anisogamous.
The gametes are produced in plurilocular gametangia.
These gametangia are many-celled, elongated, and sessile or shortly stalked conical structures.
These gametangia are produced on the haploid plants developing from the meiozoospores.
The development of gametangia is similar to that of plurilocular sporangia. 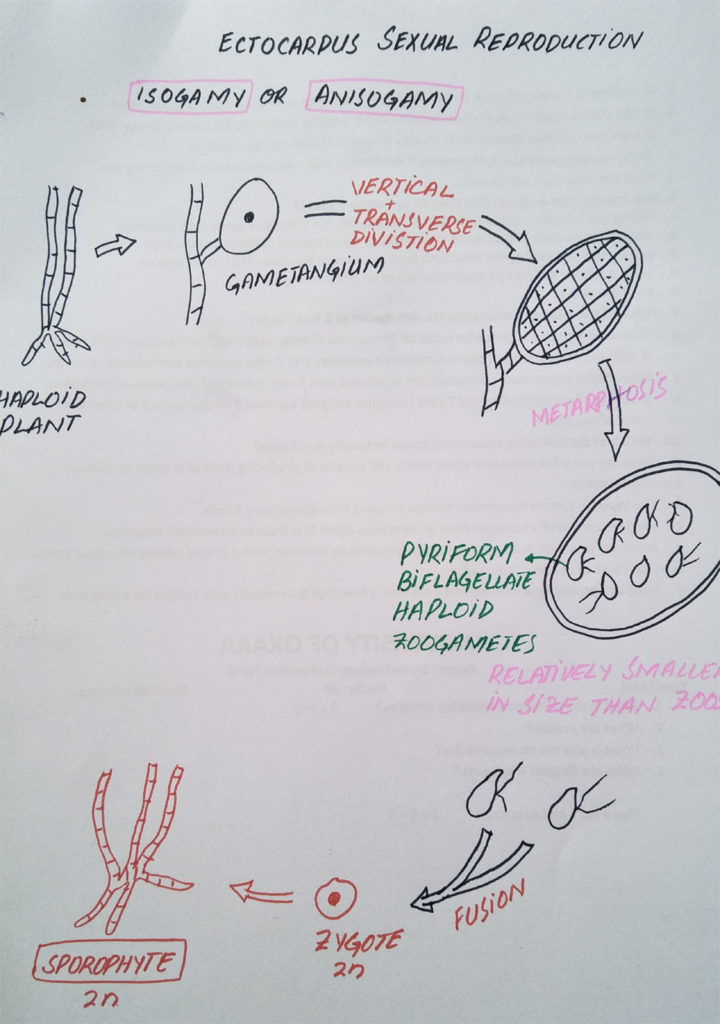 I. These develop from terminal cell of a lateral branch.
The gametangial initial gets inflated.
It divides mitotically by repeated transverse divisions.
It produces a vertical row of flat cells.

Fertilization occurs and diploid zygote is formed. There is no zygotic meiosis. The zygote germinates into a diploid sporophyte.