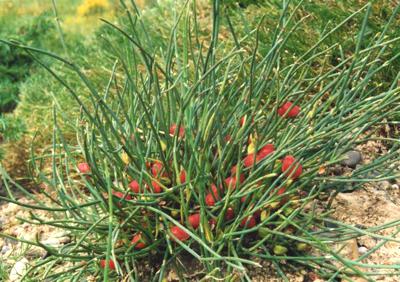 Ephedra is an arid plant. It is found in Europe, Western and Central Asia and Central and South America. It is also found in arid areas of Pakistan. Ephedra is source of drug Ephedrine. It is used for the treatment of asthma, cough and hay-fever.

The plant body of Ephedra is sporophyte. It is a bushy plant. Sometimes, it becomes a climber. It height is ranging from I to 25 feet. The body is divided into root stems and leaves.

1. Stem:
Stem and branches are slender and green in colour. It has longitudinal ridges and furrows.
Stem becomes woody due to the limited secondary growth. In some cases, underground rhizomes are also produced. The branches arise from axillary buds. Their arrangement gives the plants characteristic bushy and broom-like appearance. Apical meristem produces nodes and internodes. Meristematic tissues are also present at the base of each internode. Their activity further increases the length of stem. Sometimes, meristematic tissue becomes hard at the end of the growing season. Thus many branches fall. These branches are replaced by axillary shoot. It gives bushy appearance to the plants. The ridges and furrows of the successive internodes alternate with each other.

2. Leaves:
The leaves are scale like. They are opposite and arranged in pairs. The leaves of each pair are joined with each other at their bases. It forms a small sheath around the stem.

3. Roots:
The primary root grows deep in the soil. It develops many secondary roots. 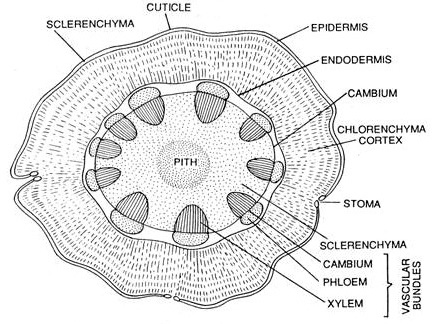 Fig: T.S of stem of ephedra

The stem has ridges and furrows. So it has a wavy outline in transverse section.

3. Stele: The central part of the stem is stele. It is surrounded by endodermis. Wide pith is present in the centre of the stele. The vascular bundles are collateral and endarch. They form a ring around the pith. The vascular bundles form a continuous ring due to narrowness of medullary rays. The xylem in Ephedra has true vessels like Angiosperms. Phloem consists of the usual phloem parenchyma and the sieve tubes. But they are without any companion cells. Secondary growth occurs due to the activity of cambium. It produces prominent annual rings.

4. Cork: Phellogen (cork cambium) is produced in the older stem. It forms periderm. The outer tissues of periderm are transformed into the bark. 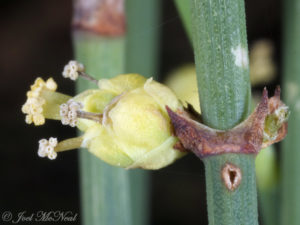 Each male cone arises in the axil of a leaf. The male cones are small. They are 1-2 cm in length. Each cone has a central axis. This axis bears 2-12 pairs of thick bracts. Bracts are arranged in an opposite manner. These bracts are closely set on the axis. A single male microsporophyll is present in the axil of each bract. Two small scales are present at the base of each sporophyll. It has a single stamen. Stamen has short stalk (filament). This stalk bears two to six microsporangia (anthers) at the top. The anthers are united in a Each anther has two or three lobes. Each lobe has a pore at its tip for releases of microspore (pollen grain).

Germination of pollen grain started before the release of pollen grain. Pollen grain divides into two cells. The smaller cell again divides to form two prothalial cells. The larger cell becomes generative cell. Generative cell divides into lower stalk and upper body cell. The upper cell divides to form two male gametes. Pollen grain is released at this stage. Two prothalial cells disintegrate just after the release of pollen grains. The pollen grains are dispersed by wind and insects. Pollen grains lodge on the ovule. It grows rapidly. A pollen tube is produced. This tube carries the two male gametes, the tube nucleus and the nucleus of the stalk cell on its tip. Pollen tube passes through the neck cells and reaches the oosphere. It releases male gametes and one of them enters the oosphere. It fuses with the Ooshere.