are separated from the cytoplasm by the nuclear envelope. The nucleus was once thought to be a fluid-filled bag in which the chromosomes floated, but we now know that the nucleus has a highly organized internal scaffolding called the nuclear matrix. This matrix consists of a network of protein fibers that maintains precise spatial relations among the nuclear components and takes part in DNA replication, the expression of genes, and the modification of gene products before they leave the nucleus.

The two chromosomes of a homologous pair are usually alike in structure and size, and each carries genetic information for the same set of hereditary characteristics.

For example, if a gene on a particular chromosome encodes a characteristic such as hair color, another gene (called an allele) at the same position on that chromosome’s homolog also encodes hair color. However, these two alleles need not be identical: one might produce red hair and the other might produce blond hair. Thus, most cells carry two sets of genetic information; these cells are diploid. But not all eukaryotic cells are diploid: reproductive cells (such as eggs, sperm, and spores) and even nonreproductive cells in some organisms may contain a single set of chromosomes. Cells with a single set of chromosomes are haploid. Haploid cells have only one copy of each gene. 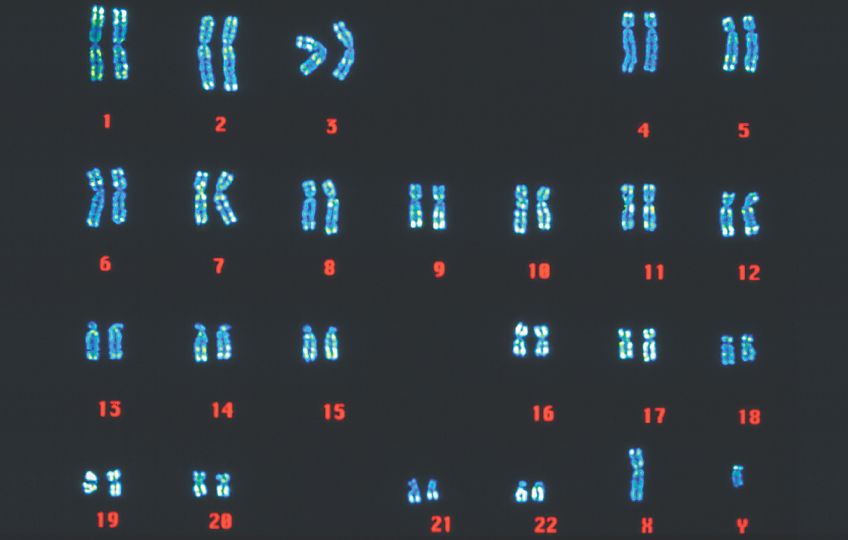 The chromosomes of eukaryotic cells are larger and more complex than those found in prokaryotes, but each unreplicated chromosome nevertheless consists of a single molecule of DNA. Although linear, the DNA molecules in eukaryotic chromosomes are highly folded and condensed; if stretched out, some human chromosomes would be several centimeters long—thousands of times longer than the span of a typical nucleus. To package such a tremendous length of DNA into this small volume, each DNA molecule is coiled again and again and tightly packed around histone proteins, forming the rod-shaped chromosomes. Most of the time the chromosomes are thin and difficult to observe but, before cell division, they condense further into thick, readily observed stru

ctures; it is at this stage that chromosomes are usually studied.

A functional chromosome has three essential elements: a centromere, a pair of telomeres, and origins of replication. The centromere is the attachment point for spindle microtubules, which are the filaments responsible for moving chromosomes during cell division. The centromere appears as a constricted region that often stains less strongly than does the rest of the chromosome. Before cell division, a protein complex called the kinetochore assembles on the centromere, to which spindle microtubules later attach.

Chromosomes without a centromere cannot be drawn into the newly formed nuclei; these chromosomes are lost, often with catastrophic consequences to the cell.

On the basis of the location of the centromere, chromosomes are classified into four types: metacentric, submetacentric, acrocentric, and telocentric. 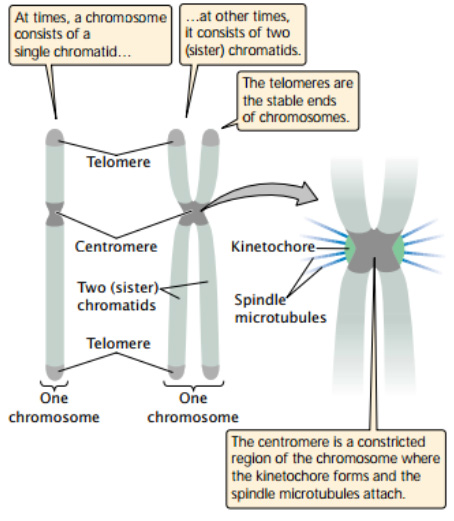 Telomeres are the natural ends, the tips, of a linear chromosome ; they serve to stabilize the chromosome ends. If a chromosome breaks, producing new ends, these ends have a tendency to stick together, and the chromosome is degraded at the newly broken ends. Telomeres provide chromosome stability. The results of research suggest that telomeres also participate in limiting cell division and may play important roles in aging and cancer.

Origins of replication are the sites where DNA synthesis begins; they are not easily observed by microscopy.

In preparation for cell division, each chromosome replicates, making a copy of itself. These two initially identical copies, called sister chromatids, are held together at the centromere.

Each sister chromatid consists of a single molecule of DNA.