About 80 000 to 120 000 species of fungi have been described to date, although the total number of species is estimated at around 1.5 million This would render fungi one of the least-explored biodiversity resources of our planet.

Almost all of us encounter fungi in our daily life, although some of us may not know much about them. The child is familiar with puff balls, mushrooms, toadstools growing outside and the housewife is familiar with them as these often grow in jams, jellies, pickles or bread, farmers are familiar with because they often cause diseases such as rusts, smuts, blights ect.

Fungi are found in wide variety of habitats. These habitats are water, soil, dead and decaying organic matter. Fungi are heterotrophic. They cannot synthesize their food. Therefore, they get their food from different sources. Fungi may be:

These fungi get their food from dead organic matter. They secretes enzyme in their substratum. These enzymes break the organic matter into simple compounds. Then fungi absorb these substances.

The live on their host and get their food from them. These fungi cause some serious diseases.

These fungi develop relation with other organisms.examples are mycorrhizae and lichens. General structureStructure of thallus

The body of fungi consists of hyphae. Hyphae  minute, thread like tubular structure. The group or mass of hyphae is called mycelium. Each hypha has cell wall. In lower fungi cellulose is the chief component. But cell walls of higher fungi have chitin in their cell wall.

With photosynthetic pigments being absent, fungi have a heterotrophic mode of nutrition. In contrast to animals which typically feed by ingestion, fungi obtain their nutrients by extracellular digestion due to the activity of secreted enzymes, followed by absorption of the solubilized breakdown products. The combination of extracellular digestion and absorption can be seen as the ultimate determinant of the fungal lifestyle. The conquest of new, often patchy resources is greatly facilitated by the production of numerous small spores rather than a few large propagules, whereas the colonization of a food source, once reached, is achieved most

efficiently by growth as a system of branching tubes, the hyphae, which together make up the mycelium. Hyphae are generally quite uniform in different taxonomic groups of fungi. One of the few features of distinction that they do offer is the presence or absence of cross-walls or septa. Oomycota and Zygomycota generally have aseptate hyphae in which the nuclei lie in a common
mass of cytoplasm . Such a condition is described as coenocytic (Gr. koinos , in common; kytos a hollow vessel, here meaning cell).

In contrast, Asco- and Basidiomycota and their associated asexual states generally have septate hyphae, ) in which each segment contai

Not all fungi grow as hyphae. Some grow as discrete yeast cells which divide by fission (Fig. 1.1c) or, more frequently, buddingns one, two or more nuclei. If the nuclei are genetically identical, as in a mycelium derived from a single uninucleate spore, the mycelium is said to be homokaryotic, but where a cell or mycelium contains nuclei of different genotype, e.g. as a result of fusion (anastomosis) of genetically different hyphae, it is said to be heterokaryotic. A spe

cial condition is found in the mycelium of many Basidiomycota in which each cell contains two genetically distinct nuclei. This condition is dikaryotic, to distinguish it from mycelia which are monokaryotic. It should be noted that septa, where present, are usually perforated and allow for the exchange of cytoplasm or organelles. 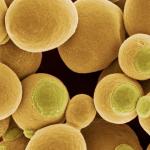 Not all fungi grow as hyphae. Some grow as discrete yeast cells which divide by fission  or, more frequently, budding. A few species, including certain pathogens of humans and animals, are dimorphic, i.e. capable of switching between hyphal and yeast-like growth forms. Intermediate stages between yeast cells and true hyphae also occur and are termed pseudohyphae. Some lower fungi grow as a thallus, i.e. a walled structure in which the protoplasm is concentrated in one or more centres from which root-like branches (rhizoids) ramify (Fig. 1.1f). Certain obligately plant-pathogenic fungi and fungus-like organisms grow as a naked plasmodium , a uni- or multinucleate mass of protoplasm not surrounded by a cell wall of its own, or as a pseudoplasmodium of amoeboid cells which retain their individual plasma membranes.

In most of the fungi, the thallus is differentiated into a vegetative part which absorbs nutrients and a reproductive part which forms reproductive structures. Such thalli are called eucarpic (Gr. Eu=good + karpos= fruit).
In some, however, the thallus does not show this differentiation and after a phase of vegetative growth, changes into one or more reproductive structures. Such thalli are called holocarpic ( Gr. Holos=entirely + karpos=fruit).

Fungi are Eukaryotes and lack chlorophyll.

The cell wall of fungus is mostly composed of Chitin (a polysachharide of glucosamine- a nitrogen containing sugar) along with pectin, protein, lipids, cellulose and minerals.