Genetic engineering means that we alter an organism permanently so that the changes will be stably inherited. For multicellular organisms this implies deliberate alteration of the DNA in the germline cells. In contrast, gene therapy (occasionally called genetic surgery ) is less permanent.
The patient is cured, more or less, by altering the genes in only part of the body. For example, cystic fibrosis patients might be partially cured by introducing the wild-type gene into the lungs. However, these changes are not inherited, and the alleles in the germline cells remain defective.

Eugenics refers to deliberate improvement of the human race by selective breeding. Early eugenic proposals were based on choosing superior parents by visual inspection or medical screening and breeding them in much the same way as for prize pigs and pedigreed dogs. Today we have reached the position where direct alterations of the human genome at the DNA level are technically feasible, although still clumsy.

The most straightforward use of gene therapy is to deal with a hereditary defect due to a single gene and that occurs only when both copies of the gene are defective—that is, a recessive condition. Introducing a single good copy of the gene can then cure the defect. This is sometimes known as replacement gene therapy . Furthermore, it would obviously simplify treatment if the disease mostly affects just one or a few organs.

The main steps involved in replacement gene therapy are as follows:
(a) Identification and characterization of gene
(b) Cloning of gene
(c) Choice of vector
(d) Method of delivery
(e) Expression of gene 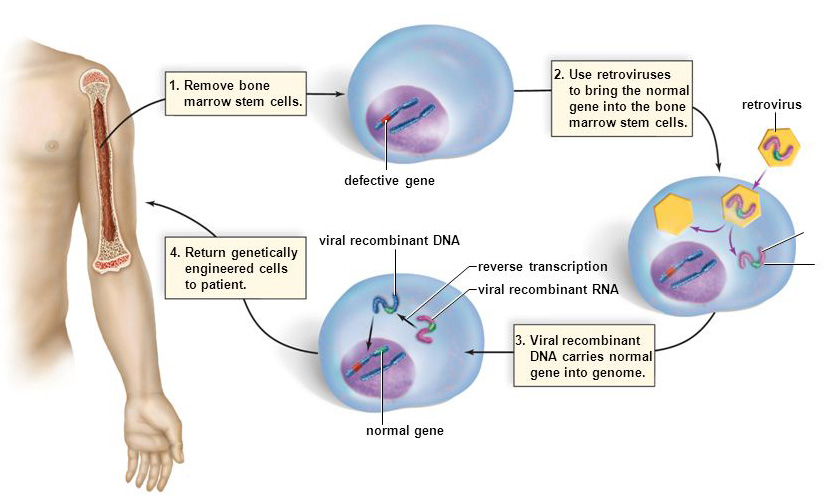 The first step is to identify the genetic defect and to clone a good copy of the gene involved. The gene must then be delivered to the patient. This involves choosing a vector together with a suitable method of delivery. In addition, the vector/gene construct must be designed to allow proper expression of the gene, once inside the patient. Delivery may be performed in a variety of ways. The vector/gene construct may be injected into the bloodstream or other tissue. It may be aerosolized and sprayed into the nose and airways. In some cases, cells are removed from the patient, engineered while growing in culture, and then returned to the patient. This approach is known as ex vivo gene therapy because the actual genetic engineering takes place outside the patient. (The direct delivery of the vector/ gene construct to the patient is sometimes called “ in vivo gene therapy” to contrast with this.)

In the laboratory, most manipulations are done with genes carried on bacterial plasmids. Although gene therapy has occasionally been performed directly with plasmid DNA carrying a therapeutic gene, more often specialized delivery systems are used. In most cases a modified virus is used as the vector. Because viruses cause disease, they first need to be genetically disarmed in order to be used in gene therapy. About 70% of human gene therapy trials have used viral vectors  Two main groups of viruses have been used, retroviruses and adenoviruses. In addition, in a smaller proportion of cases DNA has been delivered inside liposomes or projected into tissues by the gene gun.