How does the DNA sequence dictate the protein sequence?

Most  of  the  amino  acids  are  specified  by  more  than  one  code .  The  reading  occurs  continuously  without  punctuation  between  the  three  nucleotide  units .

After  Cricks  initial  experiments ,  Marshall  Nirenberg ,  Philip  Leader  and  Har  Gobind  Khorana  tested  all  the  64  codons  by  making  artificial  mRNAs  and  triplet  codons  and  using  them to  synthesize  a  protein  or  aminoacyl-tRNA  complexes  in  cell  free  systems.  The full genetic code was determined during mid 1960s.

Consider the following example in which three-letter English words are used to represent the codons:

Every  gene  starts  with  codon  AUG , which  normally  encodes  the  amino  acid

The code is degenerate which means that the same amino acid is coded by more than one codes. For example, the three amino acids arginine, alanine and leucine each have six synonymous codons.

The genetic code is non-overlapping, i.e. the adjacent codons do not overlap. A nonoverlapping code means that the same letter is not used for two different codons. In other words, no single base can take part in the formation of more than one codon. 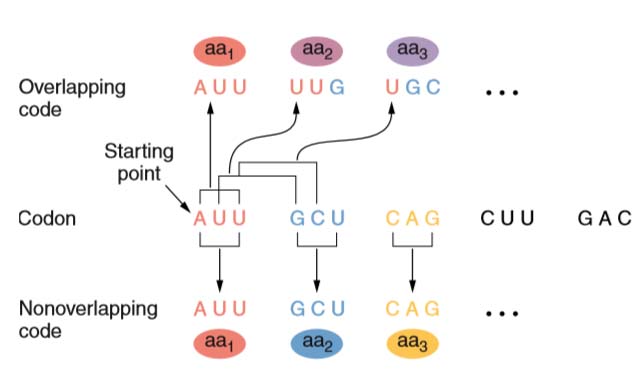 there is no signal to indicate the end of one codon and the beginning of the next. The genetic code is commaless (or comma-free).

Deletion of a single base in a commaless code alters the entire sequence of amino acids after the point of deletion as given below.

The deletion of base C from leucine will change the genetic message in the following manner:

the same codon shall not code for two or more different amino acids (non-ambiguous).

The genetic code has polarity, that is, the code is always read in a fixed direction, i.e., in the 5′ → 3′ direction.

The genetic code is almost universal. The same codons are assigned to the same amino acids and to the same START and STOP signals in the vast majority of genes in animals, plants, and microorganisms. However, some exceptions have been found.

Most of these involve assigning one or two of the three STOP codons to an amino acid instead. Some exceptions have been reported for mitochondrial genome and in unicellular eukaryotes for synthesis of nonstandard proteins such as selenocysteine and pyrolysine. 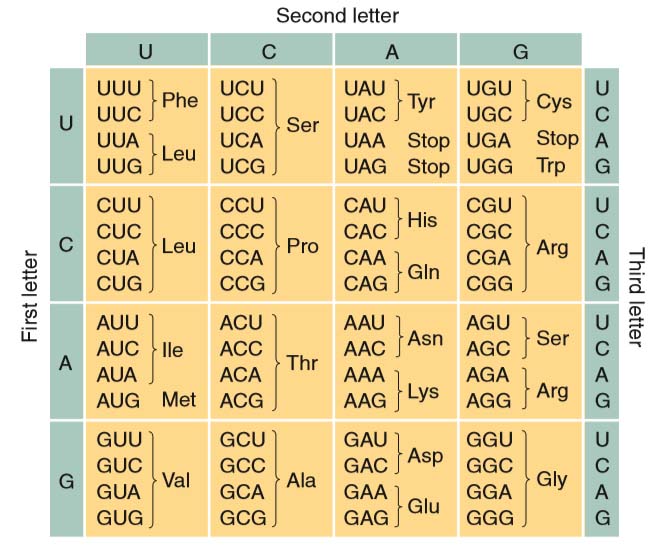