The ﬁrst stage of respiratory carbon metabolism is a group of reactions by which hexose sugars undergo a partial oxidation to the three-carbon acid pyruvic acid or pyruvate.

These reactions, collectively known as glycolysis, are catalyzed by enzymes located in the cytosol of the cell. Parallel reactions occur independently in plastids, in particular amyloplasts and some chloroplasts.

Thus, unlike animal cells, glycolysis in plants is not restricted to the cytosol.

The reaction of glycolysis, which literally means the lysis or breakdown of sugar, was originally worked out by Meyerhof and others in Germany during the early part of the twentieth century, in order to explain fermentation in yeasts and the break down of glycogen in animal muscle tissue.

(i) The ﬁrst is a set of reactions by which the several forms of glucose and fructose derived from storage carbohydrate are converted to the common intermediate triose-phosphate(triose-P)viathehexose-phosphate pool.

(ii) Triose-P is then converted to pyruvate, the end product of glycolysis.

The glucose and fructose derived from hydrolysis of starch, sucrose, or fructans must ﬁrst be converted to hexose phosphates.

The glucose converted to glucose-6-phosphate by hexokinase enzyme

These phosphorylated intermediates are subsequently converted to fructose-1,6-bisphosphate(FBP).

Note that the conversion of glucose and fructose to fructose-1,6-bisphosphate  requires an initial expenditure of energy in the form of ATP. Two molecules of ATP are consumed for each molecule of sucrose that enters glycolysis

This highly phosphorylated fructose-1,6-bisphosphate is broken down to Glyceraldehyde-3-phosphate and dihydroxy acetone phosphate.

The triose phosphates, dihydroxyacetone phosphate and glyceraldehyde-3-phosphate, are readily interconvertible (reaction 1), which means that all of the carbon in the original hexose molecule will eventually be converted to pyruvate.

In other words, one molecule of hexose phosphate will yield two molecules of pyruvate.

phosphate group from 1, 3-PGA is used to form an ATP molecule by phosphoglycerokinase.

So during the process of glycolysis a molecule of glucose (6C) is converted into two molecules of pyruvate (3C). 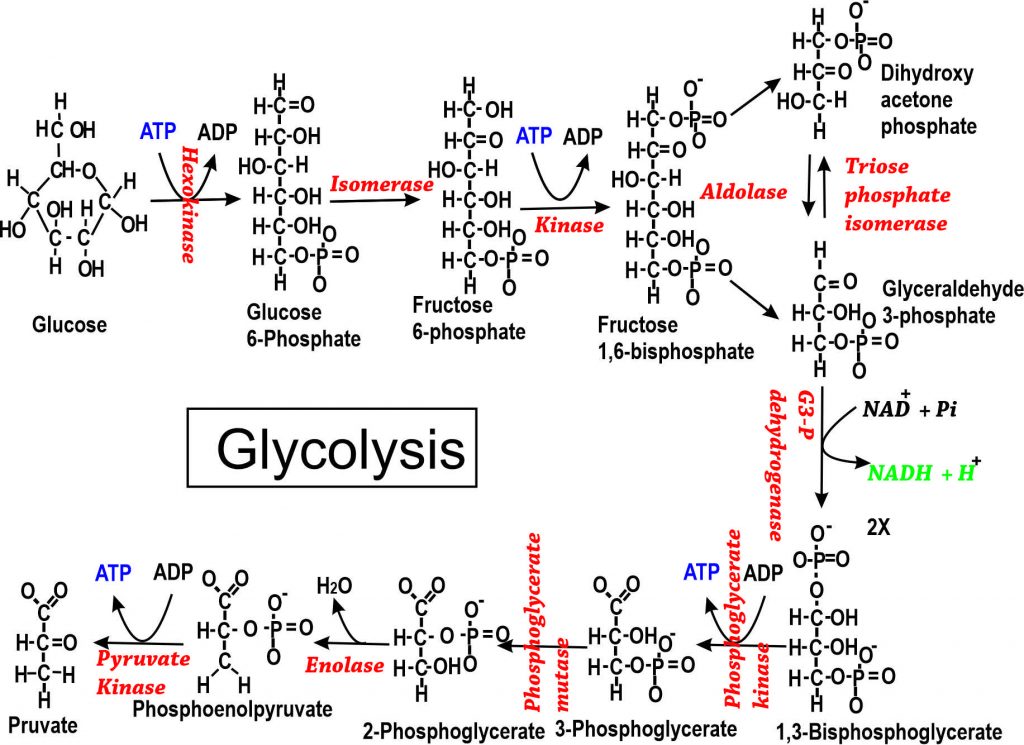