Herbicides cost the world’s farmers more than $12 billion each year. Yet despite this, around 10% of the crop is lost due to weeds. One problem is that many of the chemicals used do not discriminate between crops and weeds. So they kill any plant they touch. One solution is to make the crop plants resistant to the herbicide by genetic engineering and then spray both weeds and crop together. The weeds are killed, but the crop survives.

One of the best herbicides on the market is glyphosate , sold by Monsanto under the trade name Round-Up. Glyphosate is environmentally friendly because it quickly breaks down to nontoxic compounds in the soil.

The glyphosate molecule is an amino acid phosphate derivative related to glycine. Glyphosate kills plants by blocking the synthetic pathway for the essential aromatic amino acids phenylalanine, tyrosine, and tryptophan. 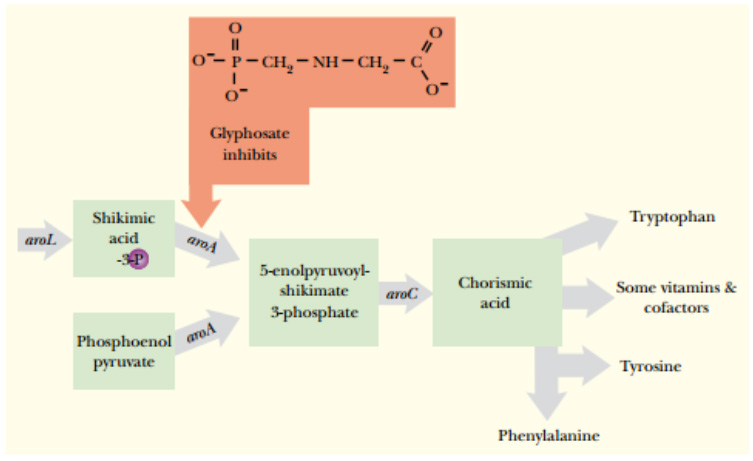 Glyphosate inhibits one particular enzyme in this pathway, EPSPS (5-enolpyruvoylshikimate-3-phosphate synthase), the product of the aroA gene, which is localized to the chloroplast.

This enzyme is found naturally in all plants, fungi, and bacteria but is not present in animals; thus, the glyphosate target enzyme does not even exist in humans.Animals, including humans, must ingest aromatic amino acids because we cannot make them ourselves.

When glyphosate is sprayed onto plants, it gets into the chloroplasts and binds to the EPSPS protein and blocks the pathway for aromatic amino acids. The plant essentially starves to death.

Because developing resistance directly in plants is difficult, scientists took a different route.

This glyphosate-resistant version of the aroA gene was cloned and modified for expression in plants. The bacterial promoter and terminator sequences were replaced with plant promoters and terminators. An antibiotic resistance gene was also added to the construct to allow selection.

The glyphosate-resistant aroA gene from Agrobacterium has been transformed into several different crops, including soybean, cotton, and canola. Canola and cotton plants were engineered using the Ti-plasmid method of gene transfer. Soybean was modified using the gene gun approach. The resulting herbicide-resistant crops were easy to identify after regenerating the plants from tissue culture.

Other herbicide tolerance genes have also been used to make transgenic crops, although these are not as widely used as the Round-Up–resistant transgenic plants. An example is resistance to sulfonylureas and imidazolinones, which inhibit an enzyme in the pathway that synthesizes the branched amino acids leucine, isoleucine, and valine.

FIGURE: Expression of the Agrobacterium aroA Gene in Plants
The bacterial aroA gene must be placed under control of a promoter active in plants.  Correct localization of the AroA protein (EPSPS) into the chloroplast requires addition of a chloroplast transit peptide at the N-terminus of the protein.

Another example is resistance to glufosinate, an herbicide that blocks synthesis of glutamine. Glufosinate was originally discovered as an antibiotic produced by Streptomyces . Scientists therefore identified the enzyme that prevented Streptomyces from being harmed by its own antibiotic. This gene was cloned and transformed into crop plants.