Such a scrutiny of records of matings is called pedigree analysis. A member of a family who first comes to the attention of a geneticist is called the propositus. Usually, the phenotype of the propositus is exceptional in some way; for example, the propositus might have some type of medical disorder. The investigator then traces the history of the phenotype through the history of the family and draws a family tree, or pedigree, by using the standard symbols given in Figure 1.0.

To see single-gene inheritance, the patterns in the pedigree have to be interpreted according to Mendel’s law of equal segregation, but humans usually have few children and so, because of this small progeny sample size, the expected 3 : 1 and 1 : 1 ratios are usually not seen unless many similar pedigrees are combined. The approach to pedigree analysis also depends on whether one of the contrasting phenotypes is a rare disorder or both phenotypes of a pair are common (in which case they are said to be “morphs” of a polymorphism). Most pedigrees are drawn for medical reasons and therefore concern medical disorders that are almost by definition rare. In this case, we have two phenotypes: the presence and the absence of the disorder. 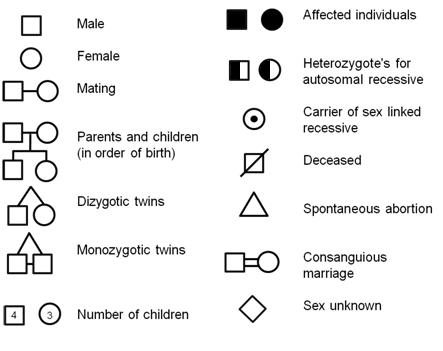 It is inherited in a simple Mendelian manner as a recessive phenotype, with PKU determined by the allele p and the normal condition determined by P. Therefore, people with this disease are of
genotype p/p, and people who do not have the disease are either P/P or P/p.

Recall that the term wild type and its allele symbols are not used in human genetics because wild type is impossible to define.
What patterns in a pedigree would reveal autosomal recessive inheritance?

The two key points are that
(1) generally the disorder appears in the progeny of unaffected parentsand
(2) the affected progeny include both males and females.
When we know that both male and female progeny are affected, we can infer that we are most likely dealing with simple Mendelian inheritance of a gene on an autosome, rather than a gene on a sex chromosome. The following typical pedigree illustrates the key point that affected children are born to unaffected parents: 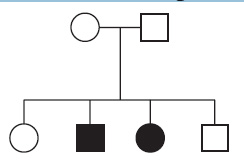 From this pattern, we can deduce a simple monohybrid cross, with the recessive allele responsible for the exceptional phenotype (indicated in black). Both parents must be heterozygotes—say, A/a; both must have an a allele because each contributed an a allele to each affected child, and both must have an A allele because they are phenotypically normal. We can identify the genotypes of the children (shown left to right) as A/−, a/a, a/a, and A/−. Hence, the pedigree can be rewritten as follows: 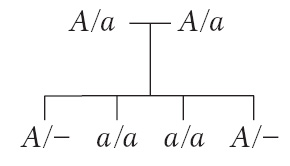