The second stage of respiration is the complete oxidation of pyruvate to CO2 and water through a series of reactions known as the citric acid cycle (CAC).

The citric acid cycle is also known as the tricarboxylic acid (TCA) cycle or the Krebs cycle, in honor of Hans Krebs, whose research in the 1930s was responsible for elucidating this central metabolic process. Krebs was awarded the Nobel Prize in medicine in 1954 for his outstanding contribution.

Entry of Pryvate into Krebs cycle:

Schemes for the citric acid cycle invariably begin with pyruvate.

Although pyruvate is technically not a part of the cycle, it does provide the major link between glycolysis and subsequent carbon metabolism.

Note that pyruvate is produced in the cytosol while the enzymes of the citric acid cycle are located in the matrix space of the mitochondrion.

Thus in order for pyruvate to be metabolized by the citric acid cycle, it must ﬁrst be translocated through the inner membrane.

Once inside the matrix, pyruvate is oxidized and decarboxylated by a large multienzyme complex pyruvate dehydrogenase.

Pyruvate dehydrogenase catalyzes a series of ﬁve linked reactions, the over all effect of which is to oxidize one molecule of pyruvate to a two-carbon acetate group:

The resulting two-carbon acetyl group is ﬁnally linked via a thioester bond to a sulphur-protein coenzyme A(CoA).

In the process, NAD+ is reduced to NADH. The CO2 given off represents the ﬁrst of three carbon atoms in the degradation of pyruvate. (Reaction 1 in fig)

The citric acid cycle proper begins with the enzyme citrate synthase, which condenses the acetyl group from acetyl-CoA with the four-carbon oxaloacetate to form the six-carbon, tricarboxyliccitric acid(hence the designation citric acid cycle, CAC). (Reaction 2 in fig). 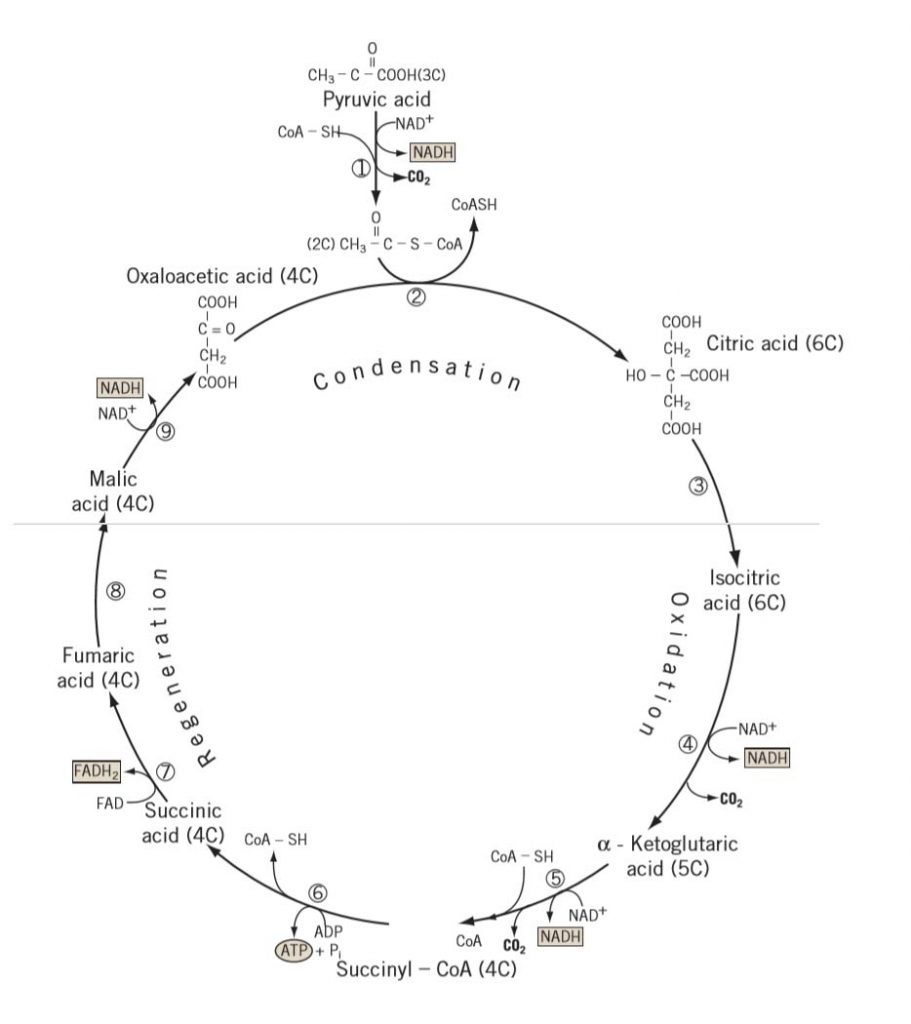 The next step is an isomerization of citrate to isocitrate (Fig, reaction 3), by enzyme aconitase.

Oxidative decarboxylations (Fig reactions 4) of isocitrate produces alpha ketogluterate. With the formation of NADH from NAD and a molecule of CO2 is given off.

Oxidative decarboxylations (Fig reactions 5) of alpha ketogluterate produces Succinyle CoA . With the formation of NADH from NAD and a molecule of CO2 is given off.

A molecule of ATP is formed when Succinyle CoA is transformed to succinate. (reaction 6)

Succinate then oxidized to fumerate with the formation of FADH2 form FAD. (Reaction 7)

Malate is formed from succinate with the utilization of water molecule. (reaction 8)

In summary, the citric acid cycle consists of eight enzyme-catalyzed steps, beginning with the condensation of a two-carbon acetyl group with the four-carbon oxaloacetate to form a molecule of the six-carbon citrate. The acetyl group is then degraded to two molecules of CO2. The cycle includes four oxidations, which yield NADH at three steps and FADH2 at one step. One molecule of ATP is formed by substrate-level phosphorylation. Finally, the oxaloacetate is regenerated, which allows the cycle to continue.

The Citric Acid Cycle of Plants Has Unique Features: