The genes which reside on the same chromosome are said to be linked, and this phenomenon is called linkage.

Linkage groups: All those genes which are located on the same chromosomes constitute a linkage group. For example, there are four (4) linkage groups in Drosophila melanogaster, 7 in Pisum sativum and 23 in man.

Each organism has thousands of genes but the number of chromosomes is limited .For example in man, there are more than twenty thousand genes on only 23 pairs of chromosomes. Therefore many genes must be present on each chromosome.

In 1906 W. Bateson and R.C. Punnet were study two characters of sweet pea, flower colour and shape of pollen.

The F2 phenotypes deviated strikingly from the expected 9:3:3:1 ratio

F2 shows large number of parental combinations (purple long and red round) than recombinants (purple round and red long).

As a possible explanation of this, they proposed that the F1 had actually produced more parental gametes( PL & pl) then would be produced by Mendelian independent assortment because these were the gametic type in the original pure lines, the researchers thought that physical

(The tendency of the two dominant genes to remain together during gamete formation on F1 generation, when they come from the same parent, is called as coupling phase.) between dominant allele P and L and between the recessive alleles p and l might have prevented their independent assortment in the F1.

The tendency of the two dominant genes to separate out during gamete formation, when they come from two different parents, is called as repulsive phase. Bateson and Punnet had crossed a plant having purple flowers and round pollen with a plant having a red flowers and long pollen. The F1 off springs showed purple flowers with long pollen having genotype PpLl. The F2 off springs showed purple long, purple round, red long and red round plants. the percentage of purple round and red long was more than expected ratios. It  is obtained because F1 forms gametes with PL or pl with lesser percentage than those with Pl and pL genes.

He found a similar deviation from Mendel’s second law while studying two autosomal genes in Drosophilla. One of these genes affects eye colour (pr, purple, and pr+, red) and the other affects wing length (vg, vestigial, and vg+, normal). The wild type alleles of both genes are dominant. Morgan crossed prprvgvg flies with pr+pr+vg+vg+ and then test crossed doubly heterozygous F1 females.

Obviously, these numbers deviate drastically from the Mendelian predictions of a 1:1:1:1 ratio, and they indicate the coupling of genes.

Morgan concluded that the genes for wing shape and eye colour are located on the same chromosome. The new combinations of the two characters were formed by crossing over. 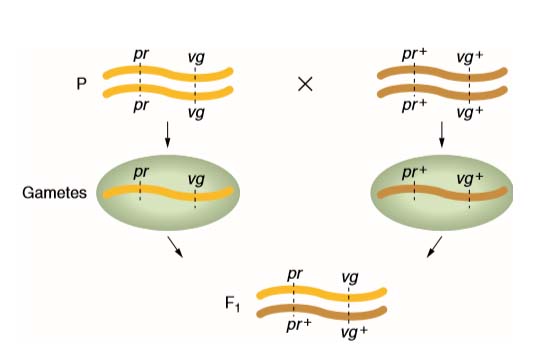 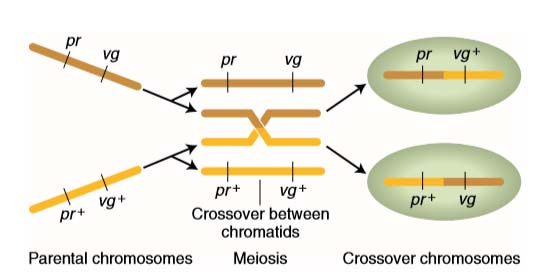 The linkage hypothesis explains why allele combinations from the parental generations remain together— because they are physically attached by the segment of chromosome between them. But how do we explain the appearance of the minority class of nonparental combinations? Morgan suggested that when homologous chromosomes pair in meiosis, the chromosomes occasionally break and exchange parts in a process called crossingover. Fig 2 illustrates this physical exchange of chromosome segments. The two new combinations are called crossover products.