About 10% of gene therapy trials have used liposomes . These are hollow microscopic spheres of phospholipid, and can be filled with DNA or other molecules during assembly. The liposomes will merge with the membranes surrounding most animal cells and the contents of the liposome end up inside the cell, a process known as lipofection . Although lipofection works reasonably well, it is rather nonspecific, because liposomes tend to merge with the membranes of any cell. 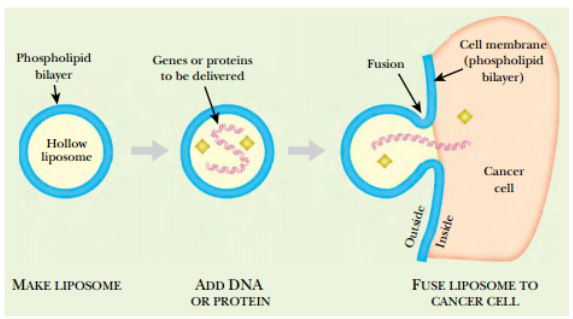 FIGURE:Delivery of Anticancer Agent by Lipofection
Liposomes are hollow spheres surrounded by a lipid bilayer. They can be filled with DNA or proteins such as TNF. Liposomes interact with cell membranes because both have hydrophobic lipid layers. Once in contact, the liposome merges with the cell membrane, delivering its payload into the cell.

A formidable problem during anticancer gene therapy is how to get foreign DNA specifically into cancer cells (Click Here for More). Lipofection is a promising approach because “armed” liposomes can be injected directly into tumor tissue. In fact, liposomes are probably of more use in delivering proteins than DNA, something not feasible when using viruses as genetic engineering vectors. For example, toxic proteins such as tumor necrosis factor (TNF) can be packaged inside liposomes and injected into tumor tissue. The liposomes merge with the cancer cell membranes, and the lethal proteins are then released inside the cancer cells.