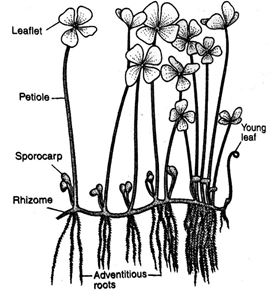 Marsilea is world-wide in distribution. Most abundantly found in tropical parts of world. The species of Marsilea are generally aqua­tic or amphibious in nature with their roots embedded in mud or damp soil.

The vegetative plant is a sporophyte. It is differentiated into roots, rhizome and leaves.

The stem is long and slender.

Rhizome:  is freely-branched underground of indefinite growth that grows on or just below the soil surface. It is differentiated into nodes and internodes.

Stolon: If stem is creeping on the surface of soil.

Leaves: The leaves are compound. Each leaf has a long petiole and four leaflets (quardifoliate). Each leaflet is triangular. Stomata are located on the dorsal side and ventral side of the leaflets.

INTERNAL STRUCTURE OF THE RHIZOME:

Internally the rhizome is composed of epidermis, cortex and central stele.

It is differentiated into three regions

Outer cortex: it is parenchymatous with large air spaces.

Middle cortex: it is sclerenchymatous.

It is present inner side of the cortex.

Is of amphiphloic (phloem is on both sides of ring shaped xylem) siphonostele. Both the inner and outer phloem are covered by Pericycle which is single layered. It has pith in the centre. Protoxylem groups are exarch in position. 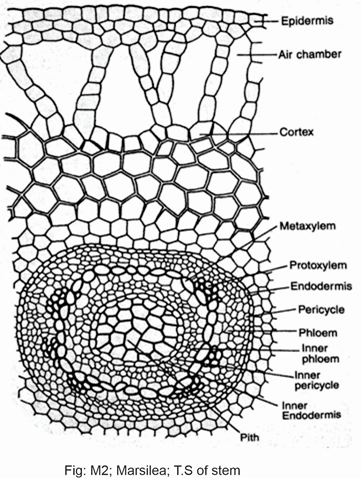 Both surfaces of the leaf are bound by epidermis.

Epidermis is covered by cuticle. It has sunken stomata. In hydrophytic species with floating leaves the stomata are restricted to the upper epidermis only.

Vascular bundle: Single vein passes through each leaf. They are concentric in nature. Each bundle has a central core of xylem surrounded by phloem. Externally vascular bundle is bound by endodermis. 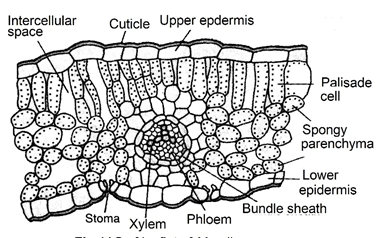 Marsilea plant is heterosporous. The micro and megasporangia are borne in special bean shaped bodies called the sporocarp.

The sporocarps are bisporangiate and are borne on short or long stalks called the peduncles or pedicels.

Both types of sporangia (micro and mega) are found within the same sorus.

Wall of the sporocarp: Wall is thick and three layered.

The sori: These are elongated and arranged in two alternating rows in the cavity.  The wall of each sorus is formed by its own indusium. Each sorus contains a row of megasporangia and several microsporangia. 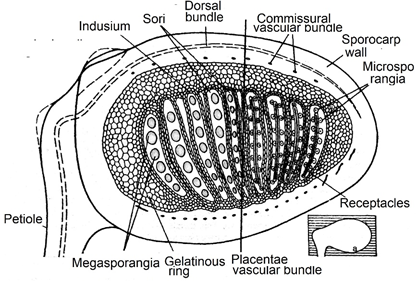 DEVELOPMENT OF THE SPORANGIUM:

Sporangial initials are present on the placenta or receptacle of sporocarp. 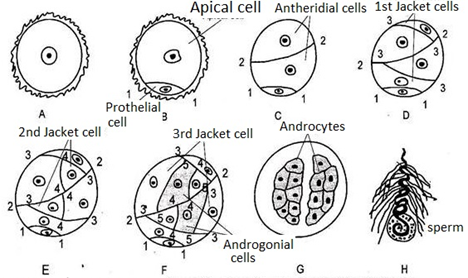 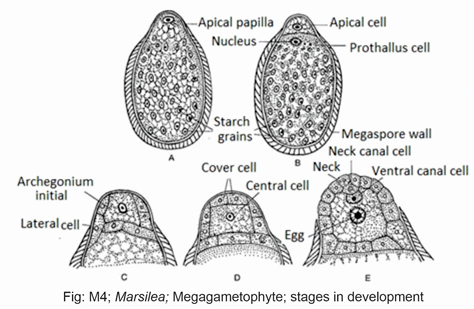 DEVELOPMENT OF THE MALE GAMETOPHYTE:

The microspore germinates to produce male gametophyte. It completes its whole development within the wall of the microspore.

Thus the antherozoids become free in the surrounding water.

DEVELOPMENT OF THE FEMALE GAMETOPHYTE:

Each mature megaspore has a dome shaped projection or beak at one end.

The nucleus of the megaspore lies, in this beak region. It is surrounded by dense granular cytoplasm.

Each megaspore is enveloped by a layer of mucilage. One of these antherozoids enters the archigonium fertilize the egg to produce oosphere.

Development of the Sporophyte

The other two cells develop into foot and root. The vegetative cells of the gametophyte form a calyptra. The surface cells of the calyptra produce long rhizoids. The root enters the soil. Cotyledon expands to form the first simple leaf. Primary root is replaced by adventitious roots. The stem grows horizontally on the soil and form the rhizome. 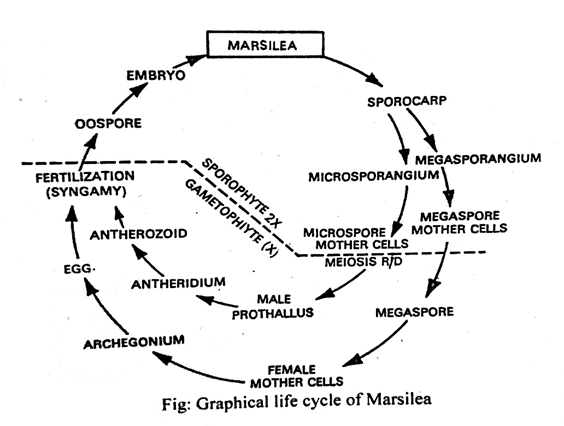