Mendel’s model for the pea-color example, translated into modern terms, was as follows

1. A hereditary factor called a gene is necessary for producing pea color.
2. Each plant has a pair of this type of gene.
3. The gene comes in two forms called alleles. If the gene is phonetically called a “wye” gene, then the two alleles can be represented by Y (standing for the yellow phenotype) and y (standing for the green phenotype).
4. A plant can be either Y/Y, y/y, or Y/y. The slash shows that the alleles are a pair.
5. In the Y/y plant, the Y allele dominates, and so the phenotype will be yellow. Hence, the phenotype of the Y/y plant defines the Y allele as dominant and the y allele as recessive.
6. In meiosis, the members of a gene pair separate equally into the cells that become eggs and sperm, the gametes. This equal separation has become known as Mendel’s first law or as the law of equal segregation. Hence, a single gamete contains only one member of the gene pair.
7. At fertilization, gametes fuse randomly, regardless of which of the alleles they bear.

The pure-breeding lines are homozygous, either Y/Y or y/y. Hence, each line produces only Y gametes or only y gametes and thus can only breed true. 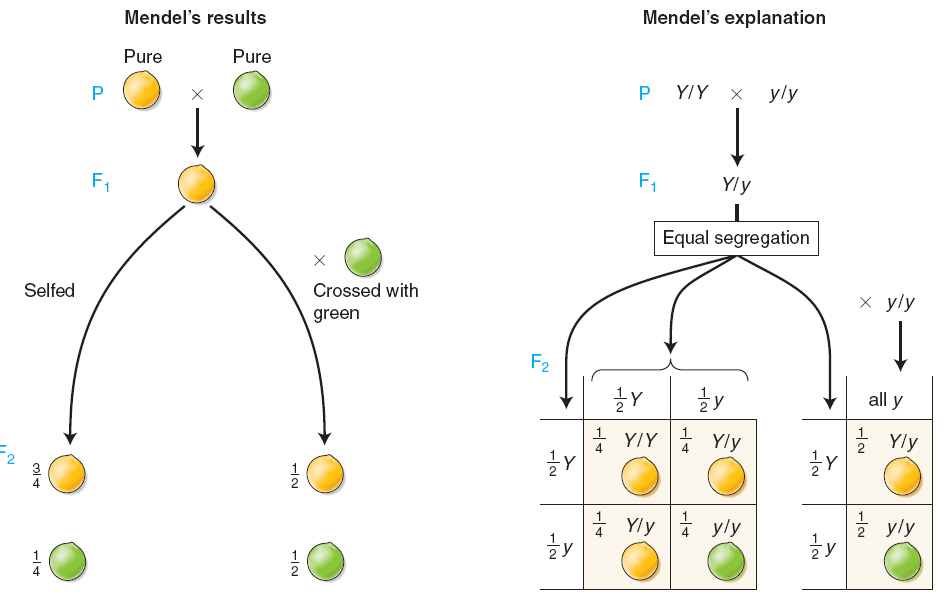 When crossed with each other, the Y/Y and the y/y lines produce an F1 generation composed of all heterozygous individuals (Y/y). Because Y is dominant, all F1 individuals are yellow in phenotype. Selfing the F1 individuals can be thought of as a cross of the type Y/y × Y/y, which is sometimes called a monohybrid cross. Equal segregation of the Y and y alleles in the heterozygous F1 results in gametes, both male and female, half of which are Y and half of which are y. Male and female gametes fuse randomly at fertilization, with the results shown in the grid in Figure 1.

The composition of the F2 is three-fourths yellow seeds and one-fourth green, a 3 : 1 ratio.

The one-fourth of the F2 seeds that are green breed true as expected of the genotype y/y.

However, the yellow F2 seeds (totaling three-fourths) are of two genotypes: two-thirds of them are clearly heterozygotes Y/y, and one-third are homozygous dominant Y/Y.

The general depiction of an individual expressing the dominant allele is Y/−;the dash represents a slot that can be filled by either another Y or a y .

Note that equal segregation is detectable only in the meiosis of a heterozygote.

Hence, Y/y produces one-half Y gametes and one-half y gametes. Although equal segregation
is taking place in homozygotes too, neither segregation 1/2 Y : 1/2 Y nor segregation 1/2 y : 1/2 y is meaningful or detectable at the genetic level.
We can now also explain results of the cross between the plants grown from F1 yellow seeds (Y/y) and the plants grown from green seeds ( y/y).
In this case, equal segregation in the yellow heterozygous F1 gives gametes with a 1/2 Y : 1/2 y ratio. The y/y parent can make only y gametes, however; so the phenotype of the progeny depends only on which allele they inherit from the Y/y parent.
Thus, the 1/2 Y : 1/2 y gametic ratio from the heterozygote is converted into a 1/2 Y/y : 1/2 y/y