The first-ever analysis of single-gene inheritance as a pathway to gene discovery was carried out by Gregor Mendel. His is the analysis that we shall follow as an example. Mendel chose the garden pea, Pisum sativum, as his research organism.
The choice of organism for any biological research is crucial, and Mendel’s choice proved to be a good one because peas are easy to grow and breed. Note, however, that Mendel did not embark on a hunt for mutants of peas; instead, he made use of mutants that had been found by others and had been used in horticulture.
Moreover, Mendel’s work differs from most genetics research undertaken today in that it was not a genetic dissection; he was not interested in the properties of peas themselves, but rather in the way in which the hereditary units that influenced those properties were inherited from generation to generation. Nevertheless, the laws of inheritance deduced by Mendel are exactly those that we use today in modern genetics in identifying single-gene inheritance patterns.

Mendel chose to investigate the inheritance of seven properties of his chosen pea species: pea color, pea shape, pod color, pod shape, flower color, plant height, and position of the flowering shoot. In genetics, the terms character and trait are used more or less synonymously; they roughly mean “property.” For each of these seven characters, he obtained from his horticultural supplier two lines that showed distinct and contrasting phenotypes. These contrasting phenotypes are illustrated in fig 1 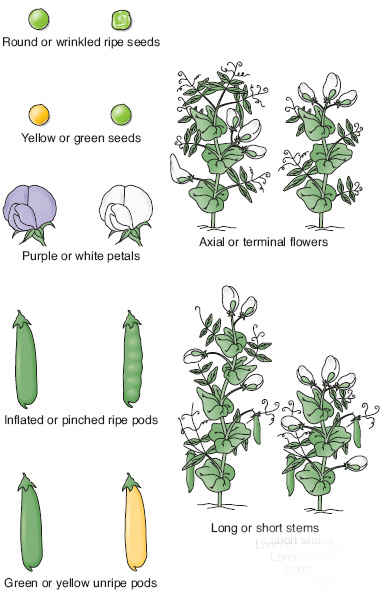 His results were substantially the same for each character, and so we can use one character, pea seed color, as an illustration. All of the lines used by Mendel were pure lines, meaning that, for the phenotype in question, all offspring produced by matings within the members of that line were identical. For example, within the yellow-seeded line, all the progeny of any mating were yellow seeded.

Mendel’s analysis of pea heredity made extensive use of crosses. To make a cross in plants such as the pea, pollen is
simply transferred from the anthers of one plant to the stigmata of another. A special type of mating is a self (selfpollination), which is carried out by allowing pollen from a flower to fall on its own stigma. Crossing and selfing are illustrated in Figure 2. 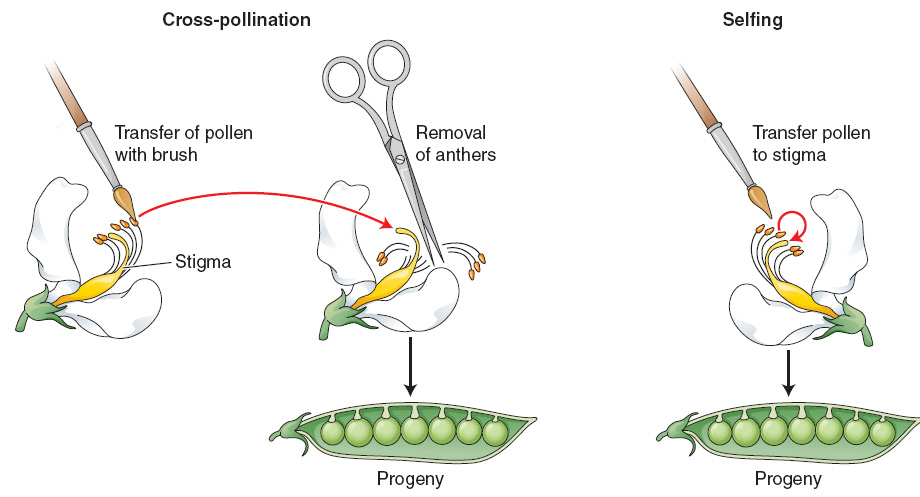 The first cross made by Mendel mated plants of the yellow-seeded lines with plants of the green-seeded lines. In his overall breeding program, these lines constituted the parental generation, abbreviated P. In Pisum sativum, the color of the seed (the pea) is determined by the seed’s own genetic makeup; hence, the peas resulting from a cross are effectively progeny and can be conveniently classified for phenotype without the need to grow them into plants. The progeny peas from the cross between the different pure lines were found to be all yellow, no matter which parent (yellow or green) was used as male or female. This progeny generation is called the first filial generation, or F1. The word filial comes from the Latin words filia (daughter) and filius (son). Hence, the results of these two reciprocal crosses were as follows, where × represents a cross:

The results observed in the descendants of both reciprocal crosses were the same, and so we will treat them as
one cross. Mendel grew F1 peas into plants, and he selfed these plants to obtain the second filial generation, or F2. The F2 was composed of 6022 yellow peas and 2001 green peas. In summary,

However, plants grown from the F2 yellow seeds, when selfed, were found to be of two types: one-third of them were pure breeding for yellow seeds, but two-thirds of them gave mixed progeny: three-fourths yellow seeds and one-fourth green seeds, just as the F1 plants had. In summary,

1/4 of the F2 were green, which when selfed gave all greens
3/4 of the F2 were yellow; of these 1/3 when selfed gave all yellows
2/3 when selfed gave 3/4 yellow and 1/4 green
Hence, looked at another way, the F2 was comprised of
1/4 pure-breeding greens
1/4 pure-breeding yellows
1/2 F1-like yellows (mixed progeny)
Thus, the 3 : 1 ratio at a more fundamental level is a 1 : 2 : 1 ratio.
Mendel made another informative cross between the F1 yellow-seeded plants
and any green-seeded plant. In this cross, the progeny showed the proportions of
one-half yellow and one-half green. In summary:
F1 yellow × green → 1/2 yellow
1/2 green.

These two types of matings, the F1 self and the cross of the F1 with any greenseeded
plant, both gave yellow and green progeny, but in different ratios.
The 3 : 1 and 1 : 1 ratios found for pea color were also found for comparable
crosses for the other six characters that Mendel studied