Although Fracastoro and a few others had suggested that invisible organisms produced disease, most people believed that disease was caused by supernatural forces, poisonous vapors called miasmas, and imbalances among the four humors thought to be present in the body. The role of the four humors (blood, phlegm, yellow bile [choler], and black bile [melancholy]) in disease had been widely accepted since the time of the Greek physician Galen (129-199).
Support for the idea that microorganisms cause disease-that is, the germ theory of disease-began to accumulate in the early nineteenth century from diverse fields. Agostino Bassi (1773-1856) demonstrated in 1835 that a silkworm disease was due to a fungal infection. He also suggested that many diseases were due to microbial infections. In 1845 M. J. Berkeley (1803-1889) proved that the great potato blight of Ireland was caused by a water mold (then thought to be a fungus), and in 1853 Heinrich deBary (1831-1888) showed that smut and rust fungi caused cereal crop diseases.

Pasteur also contributed to this area of research in several ways. His contributions began in what may seem an unlikely way. Pasteur was trained as a chemist and spent many years studying the alcoholic fermentations that yield ethanol and are used in the production of wine and other alcoholic beverages. When he began his work, the leading chemists were convinced that fermentation was due to a chemical instability that degraded the sugars in grape juice and other substances to alcohol. Pasteur did not agree; he believed that fermentations were carried out by living organisms.

In 1856 M. Bigo, an industrialist in Lille, France, where Pasteur worked, requested Pasteur’s assistance. His business produced ethanol from the fermentation of beet sugars, and the alcohol yields had recently declined and the product had become sour. Pasteur discovered that the fermentation was failing because the yeast normally responsible for alcohol formation had been replaced by bacteria that produced acid rather than ethanol. In solving this practical problem, Pasteur demonstrated that all fermentations were due to the activities of specific yeasts and bacteria, and he published several papers on fermentation between 1857 and 1860.

Pasteur was also called upon by the wine industry in France for help. For several years, poor-quality wines had been produced. Pasteur referred to the wines as diseased and demonstrated that particular wine diseases were linked to particular microbes contaminating the wine. He eventually suggested a method for heating the wines to destroy the undesirable microbes. The process is now called pasteurization.

Indirect evidence for the germ theory of disease came from the work of the English surgeon Joseph Lister (1827-1912) on the prevention of wound infections. Lister, impressed with Pasteur’s studies on fermentation and putrefaction, developed a system of antiseptic surgery designed to prevent microorganisms from entering wounds. Instruments were heat sterilized, and phenol was used on surgical dressings and at times sprayed over the surgical area. The approach was remarkably successful and transformed surgery. It also provided strong indirect evidence for the role of microorganisms in disease because phenol, which kills bacteria, also prevented wound infections.

The first direct demonstration that bacteria cause disease came from the study of anthrax by the German physician Robert Koch (1843-1910). Koch used the criteria proposed by his former teacher Jacob Henle (1809-1885) and others to establish the relationship between Bacillus anthracis and anthrax; he published his findings in 1876.

Koch injected healthy mice with material from diseased animals, and the mice became ill.
After transferring anthrax by inoculation through a series of 20 mice, he incubated a piece of spleen containing the anthrax bacillus in beef serum. The bacteria grew, reproduced, and produced endospores. When isolated bacteria or their spores were injected into healthy mice, anthrax developed. His criteria for proving the causal relationship between a microorganism and a specific disease are known as Koch’s postulates. Koch’s proof that B. anthracis caused anthrax was independently confirmed by Pasteur and his coworkers. They discovered that after burial of dead animals, anthrax spores survived and were brought to the surface by earthworms. Healthy animals then ingested the spores and became ill. After completing his anthrax studies, Koch fully outlined his postulates in his work on the cause of tuberculosis. In 1884 he reported that this disease was caused by the rod-shaped bacterium Mycobacterium tuberculosis, and in 1905 he was awarded the Nobel Prize in Physiology or Medicine. Koch’s postulates were quickly adopted by others and used to connect many diseases to their causative agent.

While Koch’s postulates are still widely used, their application is at times not feasible. For instance, organisms such as Mycobacterium leprae, the causative agent of leprosy, cannot be isolated in pure culture.

Some human diseases are so deadly (e.g., Ebola hemorrhagic fever) that it would be unethical to use humans as the experimental organism; if an appropriate animal model does not exist, the postulates cannot be fully met. To avoid some of these difficulties, microbiologists sometimes use molecular and genetic evidence. For instance, molecular methods might be used to detect the nucleic acid of a virus in body tissues, rather than isolating the virus, or the genes thought to be associated with the virulence of a pathogen might be mutated. In this case, the mutant organism should have decreased ability to cause disease. Introduction of the normal gene back into the mutant should restore the pathogen’s virulence.

During Koch’s studies on bacterial diseases, it became necessary to isolate suspected bacterial pathogens in pure culture. At first Koch cultured bacteria on the sterile surfaces of cut, boiled potatoes, but the bacteria did not always grow well. Eventually he developed culture media using meat extracts and protein digests, reasoning these were similar to body fluids. Initially he tried to solidify the media by adding gelatin. Separate bacterial colonies developed after the surface of the solidified medium had been streaked with a bacterial sample. The sample could also be mixed with liquefied gelatin medium. When the medium hardened, individual bacteria produced separate colonies.

Despite its advantages, gelatin was not an ideal solidifying agent because it can be digested by many microbes and melts at temperatures above 28°C. A better alternative was provided by Fanny Eilshemius Hesse (1850-1934), the wife of Walther Hesse (1846-1911), one of Koch’s assistants. She suggested the use of agar, which she used to make jellies, as a solidifying agent. Agar was not attacked by most bacteria. Furthermore, it did not melt until reaching a temperature of 100°C and, once melted, did not solidify until reaching a temperature of 50°C; this eliminated the need to handle boiling liquid. Some of the media developed by Koch and his associates, such as nutrient broth and nutrient agar, are still widely used. Another important tool developed in Koch’s laboratory was a container for holding solidified media the Petri dish (plate), named after Richard Petri (1852-1921), who devised it. These developments directly stimulated progress in all areas of microbiology. 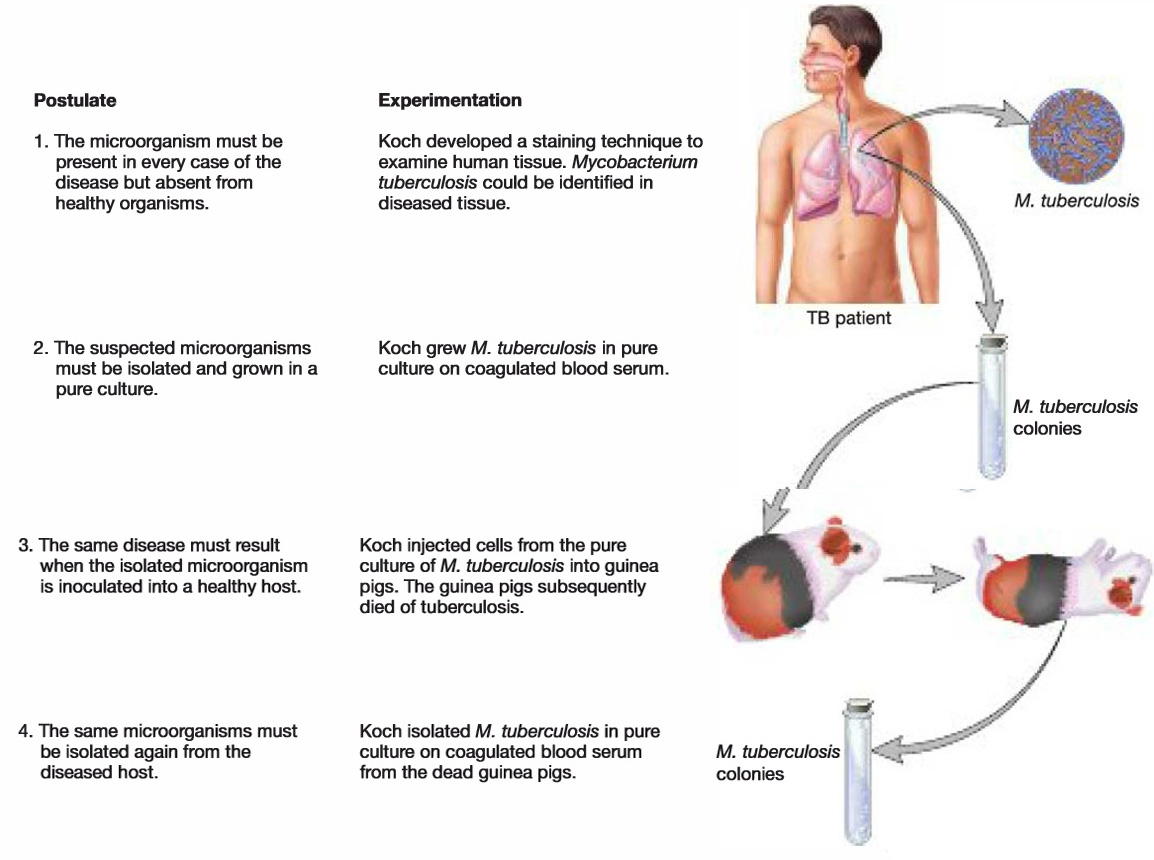 Our focus thus far has been on the development of methods for culturing bacteria. But viral pathogens were also being studied during this time, and methods for culturing them were also being developed. The discovery of viruses and their role in disease was made possible when Charles Chamberland (1851-1908), one of Pasteur’s associates, constructed a porcelain bacterial filter in 1884. Dimitri Ivanowski (1864-1920) and Martinus Beijerinck (pronounced “by-a-rink”; 1851-1931) used the filter to study tobacco mosaic disease. They found that plant extracts and sap from diseased plants were infectious, even after being filtered with Chamberland’s filter. Because the infectious agent passed through a filter that was designed to trap bacterial cells, they reasoned that the agent must be something smaller than a bacterium. Beijerinck proposed that the agent was a “filterable virus:’ Eventually viruses were shown to be tiny, acellular infectious agents.