Mitosis is a type of cell division in which one cell (the mother) divides to produce two new cells (the daughters) that are genetically identical.

Mitosis is a continuous process, but for convenience of study it may be divided into two phases:

1.Karyokinesis: This involves the division of nucleus.

2.Cytokinesis: This involves the division of cytoplasm to complete the process.

Karyokinesis is the division of nucleus.

At the beginning of the process, the partition of the centrioles take place. That have been duplicated during interphase but were in the same centrosome. Early in the mitosis the two pair of centrioles separate and migrate to opposite sides of the nucleus, establishing the bipolarity of the dividing cells. 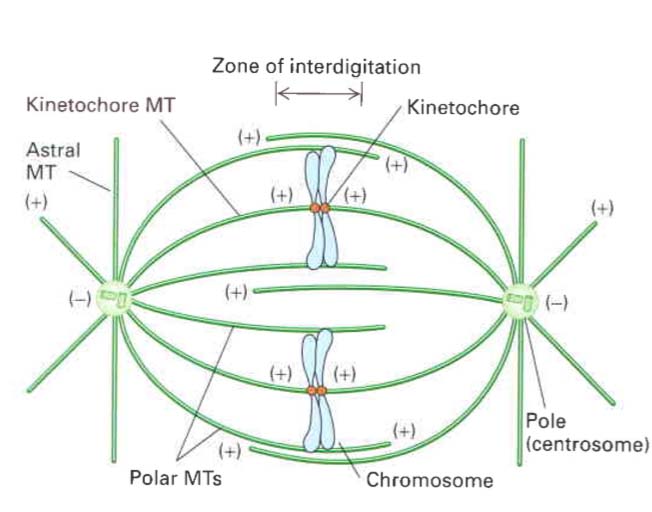 Three sets of microtubules originate from each pair of centrioles:

These microtubules are composed of tubulin protein and traces of RNA. This specialiazed microtubule structure including asters, centrioles and spindle fibre is called mitotic apparatus. 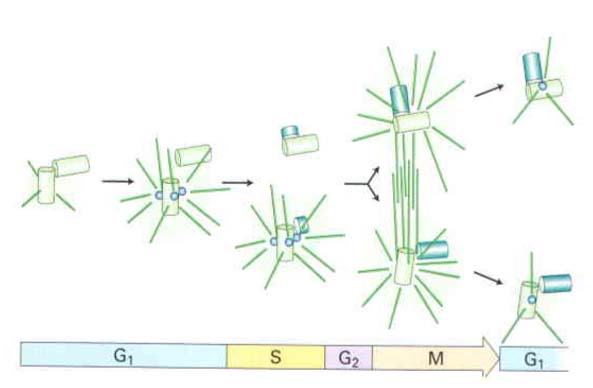 Fig Relation of centrosome duplication to the cell cycle. After the pair of parent centrioles (green) separates slightly, a daughter centriole (blue) buds from each and elongates By Gr, growth of the daughter centrioles is complete, but the two pairs remain within a single centrosomal complex Early in mitosis, the centrosome splits, and each centriole pair migrates to opposite sides of the nucleus The amount of pericentriolar material and the activity to nucleate microtubule assembly increases greatly in mitosis In mitosis, these MTOCs are called spindle ooles

Karyokinesis can further be divided into Prophase, Metaphase, Anaphase and Telophase. During interphase of the cell cycle, the chromosomes are not visible even with electron microscope, but using histological strains for DNA, a network of very fine threads can be visualized. This network is called chromatin.

(i) It is the first and the longest phase in the mitotic cell division.

(iii) Each chromosome has two chromatids that are joined at the centromere.

(i) Each metaphase chromosome is a duplicated structure, which consists of two sister chromatids, attached at a point called centromere or primary constriction.

(ii) The centeromere has special area the kinetochore, with specific base arrangement and special proteins where kinetochore microtubules of mitotic apparatus attach.

(iv) Each kinetochore gets two fibers one from each pole. 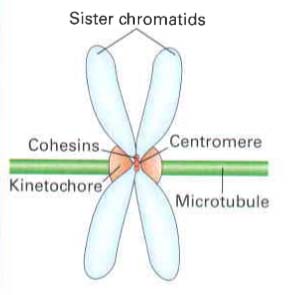 Fig: Part of condensed chromosome in mitosis. the duplicated chromosome has two sister chromatids (each with the single replicated DNA duplex), held together by cohesins at constricted region called centromere. The centromere is also the site where kinetochore forms which makes attachment to kinetochore microtubles. 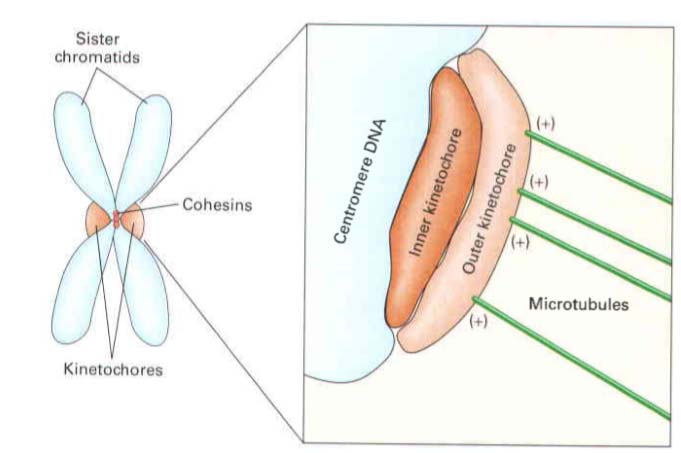 (i) It is the most critical phase of mitosis, which ensures equal distribution of chromatids in

(ii) The kinetochore microtubules of spindle contract towards their respective poles, at the same time polar microtubule elongates, exert force and sister chromatids are separated from centeromere.

(iii) As a result half sister chromatids travel towards each pole.

(i) The chromosomes reach at opposite poles.

(ii) The chromosomes de-condense due to unfolding, ultimately disappear as chromatin.

During mitosis two daughter nuclei are formed by karyokinesis. After the nuclear division, cytoplasm is divided (cytokinesis). In this process protoplasmic contents accumulate in the equatorial region in the form of small droplets, which cohere in course of time and form a continuous plate called cell plate.

A, cell in non-dividing state; B, nucleus in prophase and located in the middle of the cell;

C, nucleus in early anaphase; literally mitotic spindle is connected to parietal cytoplasm by a cytoplasmic layer the phragmosome; D, daughter nuclei in telophase, the barrel shaped spindle between the nuclei is the phragmoplast; cell plate appears in its equatorial plane; E, cell plate intersects one of the walls of the mother cell F, cell division is completed and cell plate occupies the former position of a phragmosome.