Fig: 1 Principle of the Hybridoma Monoclonal antibodies derive from a single antibody-producing B cell. The antigen is first injected into a mouse to provoke an immune response. The spleen is harvested because it harbors many activated B cells. The spleen cells are short-lived in culture, so they are fused to immortal myeloma cells. The hybridoma cells are cultured and isolated so each hybrid is separate from the other. Each hybrid clone can then be screened for the best antibody to the target protein.

There are many clinical uses for antibodies. They are used in diagnostic procedures (including the ELISA), for pregnancy testing, and to detect the presence of proteins characteristic of particular disease-causing agents.

In the future, they may be used to specifically kill cancer cells or destroy viruses. Such uses need relatively large amounts of a pure antibody that specifically recognizes a single antigen. Even if an experimental animal is inoculated with a purified single antigen, its blood serum will contain a mixture of antibodies to that antigen. Remember that a single antigen has multiple epitopes, and
ANTIBODY thus antibodies will vary in both specificity and affinity.

Nowadays, such a mixture is referred to as polyclonal antibody because it results from antibody production by many different clones of B cells, which all recognized the same antigen. Such a mixture is of little use either for a specific, accurate assay or for other techniques in biotechnology.
Somehow, a single line of B cells all making one particular antibody must be isolated and grown in culture. Such a pure antibody made by a single line of cells is known as a monoclonal antibody . Unfortunately, B cells live for only a few days and survive poorly outside the body. The solution to this problem is to use cancer cells.

Myelomas are naturally occurring cancers derived from B cells and which therefore express immunoglobulin genes. Like many tumor cells, myeloma cells will continue to grow and divide in culture forever if given proper nutrients. To make monoclonal antibodies, the relatively delicate B cell, which is making the required antibody, is fused to a myeloma cell. (To avoid confusion, a myeloma that has lost the ability to make its own antibody is used.) The resulting hybrid is called a hybridoma .

In principle it can live forever in culture and will make the desired antibody. In practice, an animal, such as a mouse, is injected with the antigen against which antibodies are needed. When antibody production has reached its peak, a sample of antibody-secreting B cells is removed from the animal. These are fused to immortal myeloma cells to give a mixture of many different hybridoma cells. The tedious part comes next. Many individual hybridoma cell lines must be screened to find one that recognizes the target antigen. Once found, the hybridoma is grown in culture to give large amounts of the monoclonal antibody. 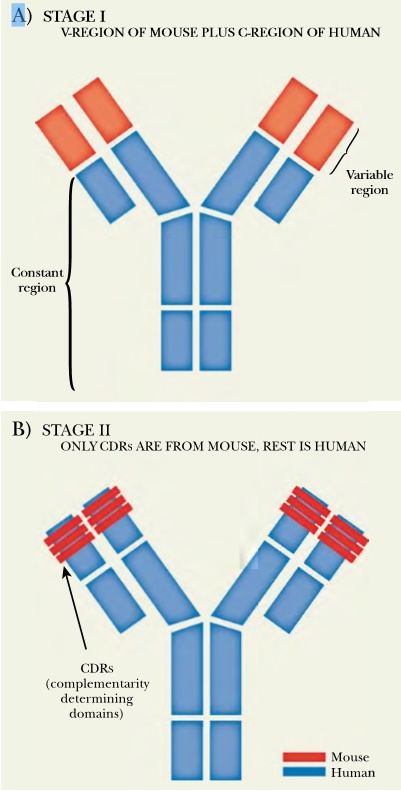 Monoclonal antibodies could theoretically be used as magic bullets to kill human cancer cells by aiming them at specific molecules appearing only on the surface of cancer cells. Ironically, the main problem is that the human immune system regards antibodies from mice or other animals as foreign molecules themselves, and so attempts to destroy them! One approach that may partly solve this problem is using genetic engineering to make humanized monoclonals.

This takes advantage of the fact that only the variable or V-region of the antibody recognizes the antigen. The constant or C-region may therefore be replaced. The first-generation hybridoma is isolated and cultured, generally using mouse B cells. Then the DNA encoding the mouse monoclonal antibody is isolated and cloned.

The DNA for the constant region of the mouse antibody is replaced with the corresponding human DNA sequence. The V region is left alone. The human/mouse hybrid gene is then put back into a second mouse myeloma cell for production of antibody in culture. Although not fully human, the hybrid is less mouselike and provokes much less reaction from the human immune system.

Further humanization can be accomplished by altering those parts of the V region that are not directly involved in binding the antigen. A closer look at the V-region of each chain shows that most of the variation is restricted to three short segments that form loops on the surface of the antibody, thus forming the antigen binding site.

These are known as hypervariable regions or as complementarity determining regions (CDRs) . Overall, each antigen binding site consists of six CDRs, three from the light chain and three from the heavy chain. Full humanization of an antibody involves cutting out the coding regions for these six CDRs from the original antibody and splicing them into the genes for human light and heavy chains.